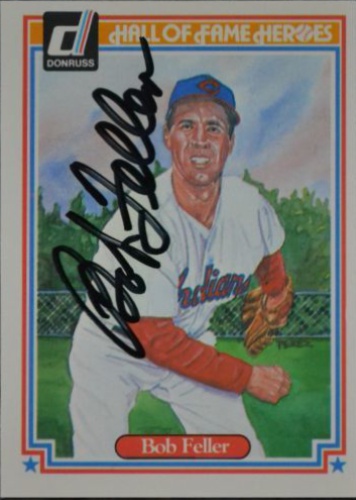 Current items with a signature of Bob Feller

These are the most current items with a signature of Bob Feller that were listed on eBay and on other online stores - click here for more items.

Traded items with a signature of Bob Feller

If you're interested in Bob Feller Rookie cards you might want to take a look at our sister site that specializes in Baseball Rookie Cards only.

The most expensive item with a signature of Bob Feller (Bob Feller Signed Auto Inscribed Mitchell & Ness Cleveland Indians Jersey) was sold in January 2014 for $1095.00 while the cheapest item (BOB FELLER AUTOGRAPHED PHOTO MATED READY FOR FRAMMING!) found a new owner for $0.01 in August 2008. The month with the most items sold (102) was December 2010 with an average selling price of $37.27 for an autographed item of Bob Feller. Sold items reached their highest average selling price in January 2014 with $74.49 and the month that saw the lowest prices with $8.75 was March 2008. In average, an autographed item from Bob Feller is worth $19.99.

Most recently, these items with a signature of Bob Feller were sold on eBay - click here for more items.

How Bob Feller made Ted Williams start preparing for him three days early (04/30/20): Most times, Ted Williams started getting ready the night before. With Feller, who threw three no-hitters, and who struck out 17 when he was 17 years old, even the greatest hitter ever knew he had his hands full.

Wire Taps: Do the Washington Nationals need Bryce Harper?; Patrick Corbin takes (12/06/18): Catch up on the last 24 hours in Nationals news while we wait for the Nats to make their next big move...

35 Photos: Bob Feller through the years (04/2015): Already a subscriber? Subscribe today for full access on your desktop, tablet, and mobile device. Already a print edition subscriber, but don't have a login?

The Bob Feller Museum is closing due to lack of interest (03/2015): It was one of only three player-specific museums left.

Bob Feller statue and 'Who's on First?' bench to move -- but remain close to Pro (09/2014): The 9-foot bronze statue of the famous Indians pitcher Bob Feller, which stands outside of Progressive Field's Gate C entrance off East Ninth Street, will be relocated nearby and remain accessible to the public.

Adam LaRoche finalist for Bob Feller Act of Valor Award (08/2014): The Nationals' first baseman will be recognized for his efforts with the military before Tuesday night's game against Arizona.

Nick Swisher willing to do anything to help ballclub; finalist for Bob Feller Aw (07/2014): Nick Swisher is slumping, but wants to do whatever it takes to help the Tribe.

Jay Bruce nominated for Bob Feller Act of Valor Award (05/2014): One Cincinnati Reds outfielder has been nominated for an award this Memorial Day weekend.

Baseball, Navy team up with Bob Feller awards (11/2013): Major league baseball and the U.S. Navy are sharing common ground in an unusual awards ceremony in Washington.

Vinnie Pestano given Bob Feller Award as Cleveland Indians' Man of the Year (12/2012): Cleveland's chapter of the Baseball Writers Association of America honored Vinnie Pestano and Manny Acta with its year-end awards.

Tigers' 13-hit game harkens back to Bob Feller in 1956 (06/2012): Right-hander Bob Feller of the Cleveland Indians was the greatest strikeout pitcher of his time. But in the final game of his career -- against the Tigers on Sept. 30, 1956 -- he didn't strike out anyone.

Medical field of dreams: Doctor meets spirit of baseball in Bob Feller (01/2012): Indians great reminded doctor of James Cagney, or Humphrey Bogart, or one of those other great actors from the 1930s, who spoke in clipped, important phrases.

Bob Feller memorabilia for sale (12/2011): The widow of Cleveland Indians Hall of Fame pitcher Bob Feller has donated some of her husband's hats and jerseys to benefit hospice.

The day I got a hit off Bob Feller (11/2011): A lifelong baseball fan recalls his greatest moment on the diamond, at Sicks' Stadium in 1976.

What a day for baby boy ... Bob Feller holds him by statue: Cleveland Indians Me (09/2011): The legendary Indians pitcher gives a couple and their baby a memory to cherish.

For this fella, doubleheader and a no-hitter by Bob Feller: Cleveland Indians Me (07/2011): Youngster's first game at Cleveland Municipal Stadium turns out to be his greatest.

A teenaged Bob Feller puts on a show against the Yankees: Tribe memories (05/2011): Here is Wednesday's essay by Charles Cormany of Medina.

Bert Blyleven got congratulatory note from Bob Feller's widow: Indians chatter (04/2011): Bert Blyleven, who will be inducted into the National Baseball Hall of Fame in July, received a letter of congratulations from Anne Feller, widow of Hall of Famer and former Indians right-hander Bob Feller, after his election in January.

ONLY ONLINE: Indians, fans remember Bob Feller (03/2011): As Indians players past and present filed quietly into pews along with ordinary baseball fans to celebrate the extraordinary life of a one-of-a-kind legend and cherished civic treasure, the church's organ filled the space with a familiar tune.

On Erie visits, Indians' Bob Feller impressed (12/2010): When Bob Feller appeared at Ainsworth Field in July 1988, I really wanted to bat against him. What self-respecting baseball fan wouldn't want to dig in at home plate against a Hall of Fame pitcher?