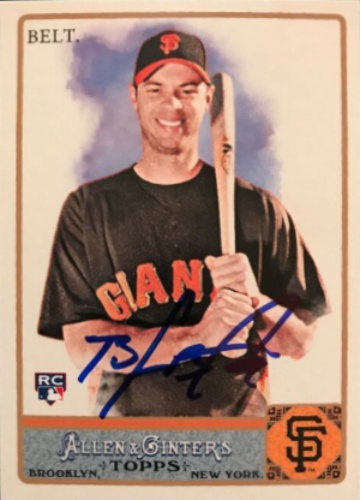 Brandon Kyle Belt (born April 20, 1988), nicknamed "Baby Giraffe" and "Sparky", is an American professional baseball first baseman for the San Francisco Giants of Major League Baseball (MLB). He played college baseball for San Jacinto College and the University of Texas at Austin. The Giants selected Belt in the fifth round of the 2009 Major League Baseball draft. He made his MLB debut during the 2011 season. Belt stands 6 feet 3 inches (191 cm) tall and weighs 231 pounds (105 kg). He was a member of the 2012 World Series and 2014 World Series championship teams with the Giants, and a 2016 All Star. Belt has also played left field and right field for the Giants. More about Brandon Belt

Current items with a signature of Brandon Belt

These are the most current items with a signature of Brandon Belt that were listed on eBay and on other online stores - click here for more items.

Traded items with a signature of Brandon Belt

The most expensive item with a signature of Brandon Belt (San Francisco Giants Brandon Belt Signed Louisville Slugger Game Used Bat COA) was sold in December 2015 for $749.99 while the cheapest item (Brandon Belt #2 Sketch Card Limited 8/25 Edward Vela Signed) found a new owner for $0.99 in July 2022. The month with the most items sold (67) was April 2011 with an average selling price of $49.99 for an autographed item of Brandon Belt. Sold items reached their highest average selling price in December 2015 with $399.99 and the month that saw the lowest prices with $0.99 was April 2019. In average, an autographed item from Brandon Belt is worth $27.52.

Most recently, these items with a signature of Brandon Belt were sold on eBay - click here for more items.

Giants' Brandon Belt embraces wild Opening Day boat entrance, backs it up (04/2022): Before Austin Slater's walk-off double, the highlight of the Giants' Opening Day win might have been Brandon Belt entering the field on a boat during pregame introductions.

Brandon Belt comically refuses Dodgers fan baseball at Giants spring training (03/2022): The rivalry between the San Francisco Giants and Los Angeles Dodgers has picked up right where it left off.

MLB Free-Agency Tracker: Latest News and Signings (11/2021): Verlander has pitched only once since 2019 and will try to re-establish himself. Brandon Belt, meanwhile, was the only M.L.B. player to accept a qualifying offer.

Posey (knee) still out; Belt on bereavement list (08/2021): The San Francisco Giants remained without catcher Buster Posey on Thursday night because of discomfort in his left knee, while Brandon Belt went on the bereavement to attend his grandmother's funeral.

Giants 1B Belt in walking boot with sore heel (07/2020): Giants first baseman Brandon Belt has been using a walking boot as he nurses a sore right heel that will keep him out at least a week.

Giants And 1B Brandon Belt Avoid Arbitration (02/2015): Giants first baseman Brandon Belt has agreed to a $3.6 million, one-year contract that avoided salary arbitration. Belt hit .308 with two RBIs in the World Series after missing time over the final 2 1/2 months […]

Former Hudson Hornet Brandon Belt wins second World Series with the Giants (10/2014): The San Francisco Giants have won their third World Series in five years after beating the Kansas City Royals 3-2 at Kauffman Stadium in Kansas City, Missouri. Former Hudson Hornet Brandon Belt was a part of the magic finishing 2-4 on the night.

Brandon Crawford, Brandon Belt lead Giants' win (09/2014): Crawford and Belt were the only regulars in San Francisco Giants' lineup on Saturday, but that was enough to beat the San Diego Padres

Giants' first baseman Brandon Belt hopes to play again this season (08/2014): Brandon Belt has missed 22 games with a concussion but is hopeful of returning to San Francisco Giants' lineup at some point in September.

Brandon Belt makes good on home run promise for cancer survivor (06/2014): San Francisco Giants first baseman Brandon Belt, rehabbing with the San Jose Giants while recovering from a broken thumb, tells 12-year-old cancer survivor Lyndsey Dworkin that he will hit a homer for her and makes good in the first inning.

SI Edge: Inside fridge of Giants' Brandon Belt (04/2014): Look inside Brandon Belt’s fridge, and you won’t see much in the way of fresh food. The Giants first baseman and his wife, Haylee, just relocated to a new home in Walnut Creek, Calif., their moving day nearly coinciding with the team’s home opener against the Diamondbacks.

Brandon Belt can't win over Giants fans (03/2014): SCOTTSDALE, Ariz. -- Brandon Belt has heard all the complaints, and one of them baffles him more than any other.

Giants' Brandon Belt living a dream (02/2014): SCOTTSDALE, Ariz. -- As a promising high school pitcher in Texas, Brandon Belt would dream about the day he would sign a multimillion-dollar deal with a Major League Baseball team.

Eric Hosmer, Brandon Belt headline 25 to qualify for 'Super 2' status (10/2013): The Super Two designation was created to reward a percentage of players with between two and three years of major league service time by giving them an extra year of arbitration; most players get three years, Super Twos get four.

Giants win on Brandon Belt's game-ending hit in 10th (09/2013): SAN FRANCISCO -- Brandon Belt's RBI single with one out in the bottom of the 10th inning gave the San Francisco Giants a 3-2 victory over the Colorado Rockies on Monday night, their second straight walkoff win.

Giants' Brandon Belt gets a grip on new swing (08/2013): San Francisco Giants first baseman Brandon Belt benefiting from a change in his swing.

Brandon Belt makes two costly mistakes as Giants suffer fifth loss in past six g (07/2013): His baserunning gaffe in the seventh inning costs the Giants a run; his fielding error in the ninth costs the defending World Series champions the game.

KETK Catches Up with Brandon Belt (01/2013): The San Francisco Giants won it all last season, thanks to some big plays by former Hudson Hornet Brandon Belt. The first baseman was in Lufkin Thursday afternoon, signing autographs for fans. read more

Brandon Belt back home (11/2012): He won the World Series with the San Francisco Giants. Brandon Belt returned home earlier this week. He had a homecoming in Hudson and another event in Lufkin. read more

Community excited about Brandon Belt's world championship (10/2012): Giants orange and black might become a common color in East Texas. Brandon Belt is a sure reason why East Texans may be sporting these colors. He has become a hometown idol for many elementary students.

Brandon Belt finally hitting stride with Giants (06/2012): Brandon Belt is emerging as a steady force in the lineup the way the San Francisco Giants had so hoped he would

SF Giants GM Brian Sabean on Brandon Belt (05/2012): I hope you Lunatic Fringe-ers appreciate how I put my rear end on the line for you. Brandon Belt had a crummy game Tuesday night (as did all the Giants ' hitters), but he was penciled into the starting lineup Wednesday,...

SF Giants should leave Brandon Belt at 1st (04/2012): There's a ride at the better amusement parks that looks like an elevator shaft, and the helpless passengers have no idea if they're about to be jerked skyward or plummeted to the depths. I can't be sure of this, but I...

Brandon Belt looks to put past season behind him (02/2012): Moises Alou, the former Giants outfielder, is general manager of the Escogido baseball club in the Dominican Republic. Brandon Belt played for Escogido last fall. As Belt took batting practice early in the winter-league...

Brandon Belt Disappointed With First Year (09/2011): Brandon Belt admitted that he hasn't had the greatest of years in 2011. And it's probably the Giants fault.

Animal park names baby giraffe after Brandon Belt (08/2011): Brandon Belt has a few highlights in his first seasons as a professional baseball player. Meeting Willie Mays. Hitting two home runs in a big-league game. But how many people can say they've had an animal named after them?

Brandon Belt Shouldn't Sweat His Long-Term Future (04/2011): Brandon Belt was sent down to the minor leagues on his 23rd birthday (ouch), but there is plenty of room for optimism when it comes to his long-term success with the Giants.