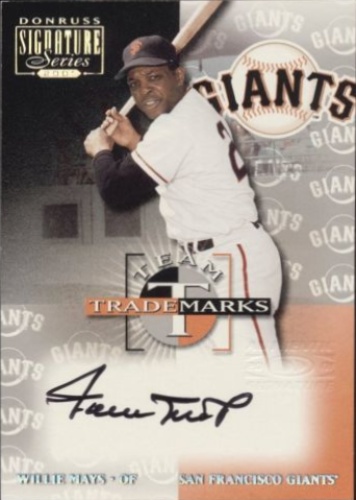 Willie Howard Mays Jr. (born May 6, 1931), nicknamed "the Say Hey Kid" and "Buck", is a former center fielder in Major League Baseball (MLB) who played in the National League (NL) between 1951 and 1973, almost entirely for the New York/San Francisco Giants. Mays joined the Birmingham Black Barons of the Negro American League in 1948, playing with them until the Giants signed him once he graduated from high school in 1950, then won the Rookie of the Year Award in 1951 after hitting 20 home runs to help the Giants win their first pennant in 14 years. After spending most of the next two years in the United States Army during the Korean War, he was named the NL Most Valuable Player (MVP) in 1954 after winning the batting title with a .345 average and hitting 41 home runs. His over-the-shoulder catch of a Vic Wertz fly ball in Game 1 of the 1954 World Series is one of the most famous baseball plays of all time. The Giants swept the heavily favored Cleveland Indians for the lone World Series triumph of his career, and the team's last title before relocating to San Francisco after the 1957 season. More about Willie Mays

Current items with a signature of Willie Mays

These are the most current items with a signature of Willie Mays that were listed on eBay and on other online stores - click here for more items.

Traded items with a signature of Willie Mays

If you're interested in Willie Mays Rookie cards you might want to take a look at our sister site that specializes in Baseball Rookie Cards only.

Most recently, these items with a signature of Willie Mays were sold on eBay - click here for more items.

Mets Retire Willie Mays’ Number at Old-Timers Day (08/28/22): The return of Old-Timers’ Day, and the retirement of No. 24 for Willie Mays, were two more instances of Steven Cohen leaning in on his team’s history.

Mays' NFT to feature diploma, benefit foundation (10/22/21): Willie Mays' diploma is being made public for the first time in the 90-year-old's first NFT (nonfungible token), which will be released Sunday, ESPN has learned.

Mays arrives in style as Giants celebrate his 90th (05/08/21): Willie Mays rode into Oracle Park in a white and turquoise 1956 Oldsmobile convertible, waving his cap to a cheering crowd as the San Francisco Giants celebrated his 90th birthday.

Willie Mays at 89: ‘My Thing Is Keep Talking and Keep Moving’ (05/2020): As the coronavirus pandemic keeps him homebound, the greatest living baseball player is missing visits to the ballpark, as well as opportunities to promote a new book on his life.

'We all knew Willie would make that catch. It's wasn't that hard. He's Willie Ma (04/2020): The argument can be made that Willie Mays was the greatest player of all time. Look at the numbers. And listen to his opponents, who had a hard time beating him and an even harder time believing he wouldn't make the impossible look easy.

From Mays to Trout: What lost career time means for the legacies of MLB greats (03/2020): As the COVID-19 shutdown keeps today's biggest stars off the field, here's what Willie Mays, Ted Williams and other Hall of Famers show us about how it could alter baseball history.

Ranking every baseball Hall of Famer -- and where 2020 candidates fit in (01/2020): Ted Williams, Stan Musial and Willie Mays could have company. Where will Derek Jeter fit in among Cooperstown's tiers of greats?

Thoughts On the Red Sox Accepting a White House Visit (12/2018): The final pitch of the 2018 World Series was devastating, an unhittable 84 mile per hour slider from Chris Sale with 7 inches of…

The Yankees are totally pretending that A-Rod isn’t nearing Willie Mays’ home ru (04/2015): For an encore they're going to prove that black is white and get themselves killed on the next zebra crossing.

Tudor: Jeff Gordon gives Willie Mays a 24-carat challenge (02/2015): Certain athletes just seem to own certain numbers. With the No. 24, Jeff Gordon is challenging to own it over Willie Mays.

Happy birthday, Willie Mays: An umpire's tribute (05/2014): Doug Harvey, in his new book, 'They Called Me God: The Best Umpire Who Ever Lived' zings a few Hall of Famers. But not Mays.

Candlestick Park closes with 49ers win, Willie Mays, 30 arrests (12/2013): SAN FRANCISCO — On a night they cheered “The Catch” and all the San Francisco greats of old, the current 49ers looked ready to move that success right into the future...

Willie Mays remembers 'sadness and fear' after JFK's death (11/2013): FILE - In this Nov. 22, 1963 file photo, President John F. Kennedy and his wife, Jacqueline Kennedy, arrive at Love Field airport in Dallas, as a television camera, above, follows them.

Shooter Now: Twins get Willie Mays' 1965 all-star HR ball (10/2013): The Twins, preparing for July's All-Star Game, received a nice artifact the other day. In the 1965 All-Star Game -- the first played in Minnesota -- at Metropolitan Stadium, the Giants' Willie Mays led off for the National League and hit the second pitch over the left-field fence.

Here's Willie Mays, MVP, Eating Breakfast In His Little Apartment (09/2013): In 1954, Willie Mays was 23 years old. That year he hit 41 home runs, had a .345 average, and was the National League MVP. And here he is, at his rented apartment in a Harlem walk-up with his landlady, one Mrs. Goosby, looking protectively over his shoulder as he eats. Read more...

Mae Mays, wife of Willie Mays, dies in Atherton (04/2013): Mae Louise Allen Mays, the wife of baseball legend Willie Mays for 41 years, died Friday at their Atherton home after a 16-year battle with Alzheimer's disease. She was 74.

Photo of the Day: Willie Mays’ catch in color (02/2013): UPDATE: The photo was colorized by John Turney, and first pointed out at UniWatch last year. Awesome job. Sorry I was unaware of the provenance until a few minutes ago. 11:02 AM: I have no idea where this came from. I saw it on a friends’ Facebook page. I don’t know if it’s an original…

The Bonus: The legend of Willie Mays (11/2012): Excerpted from How the Weather Was by Roger Kahn, with permission from Diversion Books | © Copyright 2012

Willie Mays is among honored veterans (10/2012): Major League Baseball held a ceremony before Game 2 honoring World War II-era veterans who also played in the majors as part of its Welcome Back Veterans program.

Willie Mays uniform fetches $31,000 (08/2012): Michigan Secretary of State Ruth Johnson made the announcement this morning on ... There apparently is one bright spot to the drought plaguing the Midwest -- ...

HBT: Trout 'not Willie Mays,' Washington says (07/2012): He’s not Willie Mays. He’s a pretty good player, but I think the comparisons have to stop. Let the kid play. When he’s been here five years, six years, then you can start doing that.

Obama Fundraises With Willie Mays (06/2012): At a fundraising luncheon in San Francisco this afternoon, President Obama received an enthusiastic re-endorsement from baseball Hall of Famer Willie Mays, who likened the thrill of sharing a stage with the nation’s first African-American president to playing in the World Series. “We have a...

Willie Mays Aikens Moves Forward (05/2012): KANSAS CITY, Mo. — His body hurts. He walks down the steps at Kauffman Stadium with a limp, holding both...

Sabathia comes up big for Yanks; A-Rod passes Willie Mays on all-time RBI list (04/2012): NEW YORK — Yankees manager Joe Girardi was hoping CC Sabathia would give one of those performances that has made him one of the most dependable pitchers in baseball — his bullpen really needed a break.

Catch by Detroit Tigers' Austin Jackson conjures up memories of Willie Mays (09/2011): Jackson has made several amazing plays in center field this season.

Willie Mays Is No Surfing Madonna (06/2011): Willie Mays may be forever enshrined in the Baseball Hall of Fame, but as the new face of Encinitas, California's new “Save the Ocean” campaign, he didn’t last long.

Willie Mays revisits Harlem roots along with San Francisco Giants World Series t (01/2011): NEW YORK -- From his seat on the auditorium stage at PS 46 in Harlem, he was within a Vic Wertz fly ball of the place where he first made his magnificent mark. And we all know that Willie Mays can cover that much ground in a snap.