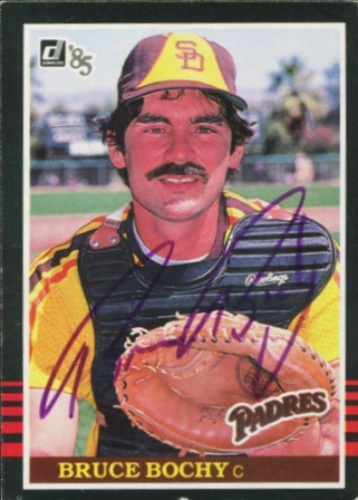 Bruce Douglas Bochy (/ˈboʊtʃi/; born April 16, 1955), nicknamed "Boch" and "Headly", is an American retired professional baseball player and manager. He is best known for managing the San Francisco Giants of Major League Baseball (MLB) from 2007 to 2019. During his playing career, Bochy was a catcher for the Houston Astros, New York Mets, and San Diego Padres. Prior to becoming the Giants' manager, he was the Padres' manager for 12 seasons. Bochy led the Giants to three World Series championships, and previously led the Padres to one World Series appearance. Bochy was the 11th manager in MLB history to achieve 2,000 wins. More about Bruce Bochy

Current items with a signature of Bruce Bochy

These are the most current items with a signature of Bruce Bochy that were listed on eBay and on other online stores - click here for more items.

Traded items with a signature of Bruce Bochy

The most expensive item with a signature of Bruce Bochy (BRUCE BOCHY FINAL AVAILABLE GAME-USED SIGNED LINEUP CARD GIANTS DODGERS 9/28/19) was sold in March 2021 for $1999.95 while the cheapest item (2001 Topps BRUCE BOCHY Signed Baseball Card PADRES) found a new owner for $0.01 in June 2010. The month with the most items sold (26) was August 2021 with an average selling price of $16.52 for an autographed item of Bruce Bochy. Sold items reached their highest average selling price in December 2019 with $78.00 and the month that saw the lowest prices with $0.01 was November 2009. In average, an autographed item from Bruce Bochy is worth $15.00.

Most recently, these items with a signature of Bruce Bochy were sold on eBay - click here for more items.

Will Padres hire Bruce Bochy? San Diego reportedly interested in luring manager (10/02/21): Bochy, who spent 12 of his 25 seasons as an MLB manager in San Diego, retired in 2019

Giants roster, schedule for MLB restart: Three things to know as San Francisco p (07/16/20): The Bruce Bochy era is over and the Gabe Kapler era begins

Will Smith thanks Giants fans, Bruce Bochy after signing with Braves (11/15/19): Will Smith is going to Atlanta but he never will forget his time in San Francisco.

Giants' Gabe Kapler met with Bruce Bochy, plans to use him as resource (11/2019): "One of the things that I'm going to set out to do is spend a lot of time with Boch and learn as much as I can about the things that he learned."

Matt Herges first member of Bruce Bochy's Giants staff to find new job (10/2019): The Giants future manager, for the most part, will bring in a new staff.

Bochy tells hilarious Sandoval stories while honoring him (01/2019): Bruce Bochy and Pablo Sandoval have a bond that will last a lifetime. And the Giants manager has some hilarious stories.

Bruce Bochy says the Giants “aren’t even close to being ready” (03/2015): They still have a few weeks to get ready, but the Giants' manager is not happy with what he's seeing.

For Giants, success starts with Bruce Bochy, 2014 Coach of the Year (12/2014): Three titles in five years and a Hall-of-Fame-level resume. How does Bruce Bochy do it? By staying cool under pressure, no matter what the situation is.

Madison Bumgarner the star, but manager Bruce Bochy should get his due after a t (10/2014): The easiest decision Bruce Bochy had all night was when to put Madison Bumgarner in the game. The hardest thing was supposed to be deciding when to take him out. Actually it wasn’t that tough. You don’t win three World […]

That time Bruce Bochy handed the ball to his son on the mound (09/2014): It was a historic night on Saturday when Giants manager Bruce Bochy called in his son, Brett Bochy, to the mound to pitch in relief.

Bruce Bochy after the Giants' latest loss: "If you look at what's happened the l (06/2014): SAN FRANCISCO--Right to Bruce Bochy's Q & A session with reporters after the Giants' 15th loss in the last 19 games, which, along with the Dodgers' victory, dropped the Giants into a virtual tie with LA atop the NL West.

Bruce Bochy skeptical three weeks makes Yasiel Puig an All-Star (06/2013): The All-Star Game rosters will be announced July 6. The Dodgers open a series in San Francisco July 5, meaning Giants Manager Bruce Bochy will get one final look at Yasiel Puig before the All-Star rosters are unveiled.

Giants: Bruce Bochy presents World Series championship ring to Nate Schierholtz (04/2013): Nate Schierholtz had a bit of a bumpy exit in the middle of his sixth season in San Francisco, but the Chicago Cubs right fielder was all smiles when he met with Giants manager Bruce Bochy on Saturday.

MLB: Bruce Bochy and Brian Sabean are the San Francisco Giants now (03/2013): The pair, who received three-year contract extensions Thursday, are the brains, discipline and emotional firepower of a franchise that has won two of the past three World Series titles

Brett Bochy, son of manager Bruce Bochy, trying to make San Francisco Giants tea (02/2013): A little bit of playful razzing comes with the territory for Brett Bochy. He gets it. In his first big league camp, his dad's the manager.

Baseball: Giants' Bruce Bochy third in N.L. manager of the year voting (11/2012): Bochy finished behind winner Davey Johnson of the Washington Nationals and Dusty Baker of the Cincinnati Reds.

HOUSTON -- The San Francisco Giants couldn't get much going offensively on Tuesd (08/2012): Pinch-hitters Joaquin Arias and Hector Sanchez came through for the Giants, both driving in runs to help San Francisco rally for a 3-2 win over the Houston Astros.

San Francisco Giants: Bruce Bochy well aware of the 'Free Belt' movement (05/2012): Fans want the Giants manager to make Brandon Belt a regular in the lineup; Bochy not making any promises about how much Belt will play

Giants manager Bruce Bochy still figuring out how to use new outfielders (04/2012): The Giants outfield was unsettled at the start of spring training, and two months later it has gotten only more complicated.

Carlos Beltran in fold, gets Bruce Bochy's No. 15 (07/2011): It seems like such a little thing, a patch of fabric on the back of a jersey. If you think about it, though, it seems startling. The manager of the defending World Series champions handed his No. 15 to Carlos Beltran....

Will Bruce Bochy fill NL team with SF Giants? (06/2011): To the victors go the spoils. This has been true through the ages in war and politics, and now in baseball All-Star selections. Bruce Bochy will manage the National League All-Stars in Phoenix on July 12 because the...