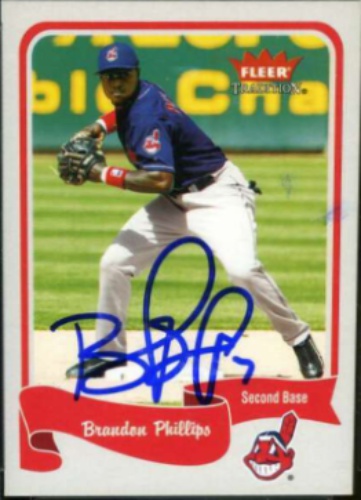 Current items with a signature of Brandon Phillips

These are the most current items with a signature of Brandon Phillips that were listed on eBay and on other online stores - click here for more items.

Traded items with a signature of Brandon Phillips

If you're interested in Brandon Phillips Rookie cards you might want to take a look at our sister site that specializes in Baseball Rookie Cards only.

The most expensive item with a signature of Brandon Phillips (Brandon Phillips SIGNED Nike Swingman Game Used Cleats PSA DNA Cincinnati Reds) was sold in April 2020 for $499.00 while the cheapest item (BRANDON PHILLIPS Signed Montreal Expos Card Auto) found a new owner for $0.01 in June 2008. The month with the most items sold (35) was December 2015 with an average selling price of $23.77 for an autographed item of Brandon Phillips. Sold items reached their highest average selling price in December 2012 with $83.00 and the month that saw the lowest prices with $0.99 was April 2010. In average, an autographed item from Brandon Phillips is worth $12.50.

Most recently, these items with a signature of Brandon Phillips were sold on eBay - click here for more items.

Guthrie throws 6 scoreless innings in Royals win over the Reds (05/21/15): The Royals tied a club record with 24 consecutive scoreless innings, which was set June 9-12, 1976. That streak ended in the seventh when Brandon Phillips’ two-out double off reliever Ryan Madson scored Zack Cozart. The Royals, who won for the fifth time ...

Nationals overcome ejections to beat Yankees 3-2 (05/21/15): The Royals tied a club record with 24 consecutive scoreless innings, which was set in 1976. The streak ended in the seventh when Brandon Phillips’ two-out double off reliever Ryan Madson. Kansas City improved to 26-14, the franchise’s best ever record ...

Guthrie, Royals ease to victory over Reds (05/21/15): The streak ended in the seventh, when Ryan Madson gave up an RBI double to Brandon Phillips. Royals manager Ned Yost said he believes his rotation is finding its groove. “Yeah. I mean, 24 scoreless innings,” Yost said. “I’d say it’s rounding out ...

Reds lose 5th straight, 7-1 to Royals (05/20/15): The Royals tied a club record with 24 consecutive scoreless innings, which was set June 9-12, 1976. That streak ended in the seventh when Brandon Phillips' two-out double off reliever Ryan Madson scored Zack Cozart. Guthrie (4-2) pitched out of a bases ...

Brandon Phillips Injury: Updates on Reds Star's Toe and Return (05/2015): Cincinnati Reds second baseman Brandon Phillips is set to return to the Reds lineup on May 15 after leaving their game on May 12 against the Atlanta Braves with a big toe injury. Continue for updates. The Reds' official Twitter feed reported that Phillips ...

Brandon Phillips Thinks Getting On Base Is Overrated (03/2015): Hold on to your butts: baseball season must be approaching, because someone's saying dumb things about the value of getting on base. And, surprise, it's a guy who doesn't do it very often. Read more...

Reds' Brandon Phillips to have thumb surgery (07/2014): Cincinnati Reds second baseman Brandon Phillips is expected to miss six weeks after he has surgery on Friday to repair torn ligaments in his left thumb.

Brandon Phillips Terrifies Baby (04/2014): Somebody get that baby some ice cream, man. He's had a rough day. Read more...

Brandon Phillips rips Cincinnati media: 'How the [expletive] am I declining?' (03/2014): It’s been a week of anger for All-Star second basemen. Back on Tuesday, Detroit’s Ian Kinsler put Rangers general manager Jon Daniels on blast, calling him “a sleazeball” in an ESPN The Magazine profile.

Brandon Phillips Bunts, Gets Hit In The Head And Called Out (09/2013): This is what you get for bunting. With men on first and second in the ninth inning of a tie game in Houston, Brandon Phillips successfully bunted them to second and third. And then he ran inside the baseline and got hit in the dome, ruining everything. Read more...

Brandon Phillips has a complex (08/2013): Phillips does a lot of things well, but getting on base isn't one of them. Perhaps his sensitivity in this regard can be traced back to the beginnings of his career.

Brandon Phillips' strange double lifts Reds over Mets 7-4 (05/2013): NEW YORK (AP) -- Brandon Phillips bounced a bizarre double over first base to snap a ninth-inning tie, and the Cincinnati Reds completed a three-game sweep of the struggling New York Mets with a 7-4 victory Wednesday.

Reds Player Brandon Phillips Models for GQ Magazine (04/2013): The second baseman is featured along with five other players in May issue

UPDATE: Brandon Phillips ’ comments about the Dominican Republic’s celebration n (03/2013): UPDATE: Ken Rosenthal says that the comments of Phillips and others, such as they were, were not digs on the D.R. players as such. Go read his whole column here for a far more thorough handling of the comments Kernan tweeted about earlier. 5: 02 PM: I suppose it now, as they say, on: Brandon…

Doc: Brandon Phillips is right (02/2013): Baseball is easily the most Stuffed Shirt of our games. So many unwritten rules. So much old school emphasis on not Showing Up your opponent. Brandon Phillips said yesterday that his flashy style cost him a Gold Glove last summer. I agree.

Brandon Phillips injury: Reds 2B will be out ‘for a while’ with left calf strain (07/2012): Cincinnati Reds second baseman Brandon Phillips left Tuesday’s 7-6 win over the San Diego Padres after hitting what turned out to be a game-winning solo home run in the seventh inning. The team said he departed with a mild left calf strain.

Jim Ingraham: Stars aligned when Bartolo Colon was traded for Grady Sizemore, Br (06/2012): Ten years ago this month, almost to the day — June 26, 2002 — the press box at Fenway Park started buzzing near the end of the Indians' 7-4 loss to the Red Sox.