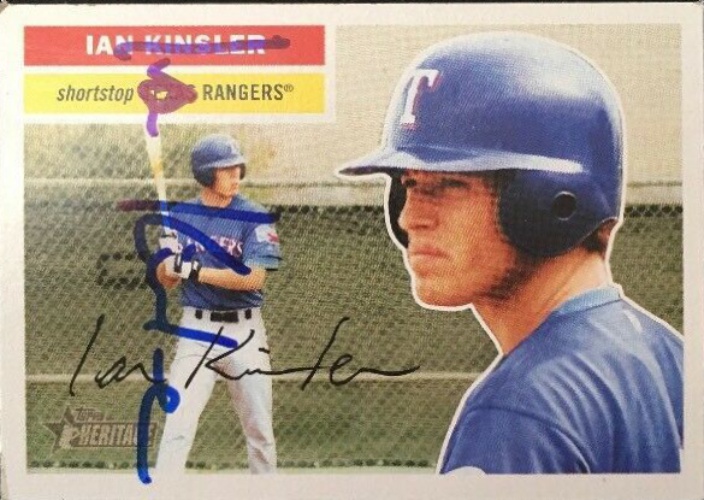 Current items with a signature of Ian Kinsler

These are the most current items with a signature of Ian Kinsler that were listed on eBay and on other online stores - click here for more items.

Traded items with a signature of Ian Kinsler

The most expensive item with a signature of Ian Kinsler (Ian Kinsler Texas Rangers Game Used 2013 Helmet Autographed(1000th Hit)mlb Holo) was sold in July 2013 for $1499.00 while the cheapest item (Ian Kinsler autographed photo Rangers) found a new owner for $0.25 in July 2012. The month with the most items sold (55) was October 2011 with an average selling price of $20.00 for an autographed item of Ian Kinsler. Sold items reached their highest average selling price in November 2017 with $394.50 and the month that saw the lowest prices with $1.75 was January 2021. In average, an autographed item from Ian Kinsler is worth $21.50.

Most recently, these items with a signature of Ian Kinsler were sold on eBay - click here for more items.

Padres infielder Ian Kinsler to retire, remain with San Diego in front office ro (12/20/19): Kinsler had a good career, albeit one that's likely to fall short of Cooperstown

Tigers 6, Astros 5 (11): McCann's walk-off homer wins it (05/21/15): Price set down the order in the first three innings until Jose Altuve led off the fourth with a single over the head of Ian Kinsler. He eventually walked George Springer to give the Astros two men on with just one out. Price struck out Evan Gattis and did ...

Astros rally in 9th on Tucker HR, fall in 11th to Tigers (05/21/15): Will Harris came in to strike out Ian Kinsler and Miguel Cabrera to send the game to extra innings. Tigers starter David Price allowed three runs — two earned — while striking out 12 in 6 2-3 innings. Houston starter Scott Feldman gave up five runs on ...

Seventh-inning update: Tigers 5, Astros 0 (05/21/15): James McCann singled to lead off the rally, and later scored unearned on an Ian Kinsler fielder's choice. Miguel Cabrera knocked in the other runner, Andrew Romine who also reached on a fielder's choice, for the 1,400th RBI of his career. ... Price retires ...

Live updates: McCann hits walk-off homer for Tigers (05/2015): Ian Kinsler was robbed of a hit by second baseman Jose Altuve but still got the RBI on a fielder's choice, then Miguel Cabrera roped a single to left for the second run of the inning. That, by the way, was the 1,400th career RBI for Cabrera. The Tigers ...

Tigers 9, Indians 6: Ian Kinsler breaks tie in ninth as Detroit rallies for wild (04/2015): The Tigers trailed for the first time this season after an Indians rally in the sixth. But they battled back for their fifth consecutive win to start the season.

Pirates 8, Tigers 7: Ian Kinsler stays hot at plate, Detroit's ninth-inning rall (03/2015): A day after homering in his return to Detroit's lineup, Kinsler stayed hot at the plate with a pair of doubles and a three-hit day in the Tigers' 8-7 loss to the Pittsburgh Pirates.

Detroit Tigers grades: Ian Kinsler receives 'B-minus' grade after disappearing i (10/2014): We'll close out our four-day report-card series by grading the infielders and catchers on Detroit's roster. We'll also offer you the opportunity to grade each player later in the day.

Column: As Detroit Tigers honor Hank Greenberg, Ian Kinsler stars in the here an (09/2014): A weekend of Tigers' baseball included veterans stepping up in a big series and a rookie 'dress up day.'

Analysis: Detroit Tigers need first-half MVP Ian Kinsler to break out of slump t (08/2014): There's a few Tigers players that have completely fallen off the radar since the All-Star break, and one of those players happens to be the team's first-half MVP.

Brad Ausmus explains decision to sit red-hot Ian Kinsler in Houston: 'The guy ha (06/2014): A day after playing hero in the Tigers' 4-3 come-from-behind win Saturday, Ian Kinsler was held out of the Tigers' starting lineup for their series finale in Houston. But why?

Ian Kinsler Tweets Out Photo Of His ‘Protection’ [PHOTO] (04/2014): Ian Kinsler is settling in with the Tigers nicely.

Ian Kinsler, Brian McCann Offseason Moves Could Have World Series Implications (02/2014): The sweet smell of spring training is in the air, which means Opening Day is...

Report: Ian Kinsler declined trade to Blue Jays before being dealt to Tigers (01/2014): Had Kinsler agreed to go to the Blue Jays deal certainly opens a can of what-ifs for the Tigers, who traded first baseman Prince Fielder and $30 million to the Rangers in exchange for the all-star second baseman.

New Tiger Ian Kinsler praises uniform, fans; 'Detroit is the perfect place for m (11/2013): Loading Photo Galleries ... Twice with the Rangers, Ian Kinsler hit 30-plus home runs and stole 30 bases in the same season. 'One thing I definitely want to try to improve on next year is my ability to run, my ability to create with my legs,' he says.

Ian Kinsler powers Rangers past Orioles (07/2013): BALTIMORE - After the Baltimore Orioles repeatedly failed to get a clutch hit, the Texas Rangers got one after another in a big inning that ultimately decided a duel between AL playoff contenders.

Rangers’ June turnaround linked to Ian Kinsler’s return (06/2013): The club is 6-3 since the second baseman came off the DL and has won five straight.

Ian Kinsler starting to find spring comfort zone (03/2013): The second baseman entered Monday hitting .154 but had hits in his first three at-bats vs. the Royals.

Ian Kinsler 'excited' to stay at second base for Rangers (01/2013): Rangers notes

Justin Smith, Ian Kinsler Among 2012 Mizzou Hall of Fame Class (12/2012): COLUMBIA -- Five outstanding former student-athletes have been selected for induction into the University of Missouri Intercollegiate Athletics Hall of Fame. They will represent the 23rd induction class since the inception of the Hall in 1990.

Rangers Ian Kinsler talks to Dale before charity feast (11/2012): Thanksgiving is coming a week early for the families at Family Gateway, an organization that helps homeless families in the area, and it's coming from Texas Rangers second baseman Ian Kinsler and his wife, Tess.

Ian Kinsler & Elvis Andrus Make Some Dubious History (10/2012): In 2012, Ian Kinsler and Elvis Andrus were picked off more than any pair of teammates since at least 1987, when the league began keeping track of this sort of thing. Photo Credit: AP

Indians Fall Short on Ian Kinsler Bobblehead Night (07/2012): SPOKANE, WA - The Spokane Indians scored two runs in the bottom of the ninth to force extras, but couldn't hold off the Yakima Bears.  Steven Rodriguez hits the go-ahead double to gives Yakima the 8-6 win in 12 innings.

Texas Rangers' Ian Kinsler helps out Make-A-Wish organization (05/2012): Ian Kinsler has become one of the top second baseman in baseball, and also a fan favorite in the Dallas/Fort Worth area. There's no questioning his popularity, either, as countless children wear high knee socks in Little League games to resemble Kinsler's look.

Deal keeps Ian Kinsler where he wants to be (04/2012): The Texas Rangers' second baseman is signed. Is Josh Hamilton next?

Examining an enigma: Ian Kinsler (09/2011): No Rangers player polarizes fans and analysts like Ian Kinsler does. The Rangers' second baseman has a very inconsistent offensive profile -- and a truly unique one. What makes Ian Kinsler the hitter he is?

John Rhadigan: Ian Kinsler does not get intoxicated by the long ball (05/2011): Texas Rangers announcer John Rhadigan chatted with fans on Tuesday and answered questions about the club. Here are some highlights:

Ian Kinsler's Main Goal This Season Is To Stay Healthy (03/2011): It was a simple question for Ian Kinsler. Are you going to stay healthy this season? "I'm going to do my best," he said.