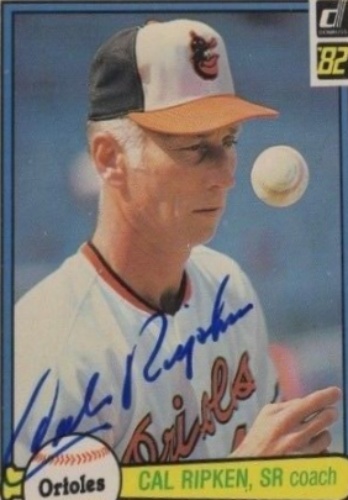 Calvin Edwin Ripken Jr. (born August 24, 1960), nicknamed "The Iron Man", is an American former baseball shortstop and third baseman who played 21 seasons in Major League Baseball (MLB) for the Baltimore Orioles (1981–2001). One of his position's most offensively productive players, Ripken compiled 3,184 hits, 431 home runs, and 1,695 runs batted in during his career, and he won two Gold Glove Awards for his defense. He was a 19-time All-Star and was twice named American League (AL) Most Valuable Player (MVP). Ripken holds the record for consecutive games played, 2,632, surpassing Lou Gehrig's streak of 2,130 that had stood for 56 years and that many deemed unbreakable. In 2007, he was elected to the National Baseball Hall of Fame in his first year of eligibility with 98.53% of votes, the sixth-highest election percentage ever. More about Cal Ripken

Current items with a signature of Cal Ripken

These are the most current items with a signature of Cal Ripken that were listed on eBay and on other online stores - click here for more items.

Traded items with a signature of Cal Ripken

If you're interested in Cal Ripken Rookie cards you might want to take a look at our sister site that specializes in Baseball Rookie Cards only.

Most recently, these items with a signature of Cal Ripken were sold on eBay - click here for more items.

Cal Ripken Beat Cancer, Talks 25th Anniversary of His Streak (09/04/20): With the 25th anniversary of his record-breaking 2,131st consecutive game approaching, Ripken is still a reliable presence around baseball, building another legacy at the youth level.

Ryan Day: 'Always running the show' (12/07/18): The University of New Hampshire football team was in deep trouble at No. 2 Delaware when the Blue Hens kicked a field goal with nine minutes left in the third

George Bush and Ted Williams were on the same Navy enlistment (12/07/18): The Official Site of Major League Baseball

Ryan Day: 'Always running the show' (12/2018): The University of New Hampshire football team was in deep trouble at No. 2 Delaware when the Blue Hens kicked a field goal with nine minutes left in the third

PRINCETON: Baseball Hall of Famer Cal Ripken Jr. to sign copies of his new child (02/2015): When Cal Ripken Jr. was a young player for the Baltimore Orioles, he thought that when signing autographs, he could make more people happier if he signed faster. But that made his signature sloppy and hard to read.

Joe Maddon, Cal Ripken Jr. visit area for community center event (12/2014): New Chicago Cubs manager and Hazleton native Joe Maddon brought Hall of Famer Cal Ripken Jr. to the Hazleton One Community Center on Thursday and took time out to talk about baseball and just about anything else brought up in the time allotted to the medi

New lighting in Cal Ripken Sr. Youth Development Park paid for with Dauphin Coun (11/2014): Congratulations! Your weather is set to . You can change the location at any time. Don't have an account?

Speed Painter Tim Decker Raises $66,000 for Cal Ripken Sr. Foundation (04/2014): A renowned speed painter has raised thousands of dollars for charity by creating a painting of a baseball legend and hall of famer, which took less than five minutes to paint. (PRWeb April 29, 2014) Read the full story at http://www.prweb.com/releases/2014/04/prweb11802767.htm

Cal Ripken Joins the Scott Garceau Show (02/2014): Cal Ripken joined the Scott Garceau show with Jeremy Conn to just talk all things baseball. Cal talked about the banquet that he is hosting tonight in his fathers honor and the foundation that bears […]

DC Sports Bog: Cal Ripken on talking about the Nats job with Mike Rizzo (01/2014): Orioles great says 'certainly there was an exploration' between him and the Nationals for their vacant job.

Cal Ripken Foundation Starts Building New Field In Hartford (11/2013): Hartford is working with the Cal Ripken Foundation to build the city’s first all-weather park for kids. Today, Mayor Segarra officially marked the beginning of construction for the first of three facilites that will feature a low maintenance synthetic surface …

Transitions Optical And MLB Hall of Famer Cal Ripken, Jr. Hit A Homerun By Makin (08/2013): PINELLAS PARK, Fla., Aug. 27, 2013 /PRNewswire/ -- After teaming up for a series of events – which recently concluded in the Baltimore area – aimed at raising awareness about the importance of healthy, ...

Cal Ripken Discusses Mother’s Kidnapping (11/2012): In a new interview about the abduction of his mother, Cal Ripken reveals the tolls it's taken on his family. The suspect has still not been caught, four months after a terrifying 24 hours for the Ripkens.

Helped by Cal Ripken Sr. Foundation, new park will open on Berryhill Street in H (10/2012): Fifty years ago, the ball field on Berryhill Street was a mecca for youth baseball. With a $1.2 million construction project, it is hoped that the field will once again attract area youth.

5 Questions for... Cal Ripken Jr. (08/2012): The Yankees have back-to-back weekend series against the Orioles with the Rays sandwiched in between. TBS baseball analyst Cal Ripken Jr. breaks down the AL East race with The Post’s Justin Terranova. The Hall of Famer will be in the TBS booth for the Sept. 9 series finale between...

Cal Ripken's mother kidnapped, later released (07/2012): The matriarch of the baseball family was found with her hands bound in the back seat of her car Wednesday after she said she was kidnapped at gunpoint a day earlier at her Maryland home.

Bird Feed: Duncan's reliability evokes that of Cal Ripken (05/2012): We just passed the quarter turn in the 2012 baseball season, but in the sports area of The Daily Times office, the chatter has turned to the NBA playoffs.

Cal Ripken, other ex-major leaguers golf to raise money for Harrisburg multipurp (09/2011): As someone who’s been around baseball his entire life, Cal Ripken Jr. said he just assumes kids in urban areas know how to play the game. It shocks him when they don’t know the basics, like how to hold a bat or throw a baseball.

CAL RIPKEN: Friday night Clifton Park contest postponed due to rain (07/2011): CLIFTON PARK – Everything was going Clifton Park’s way during the Cal Ripken Baseball 12-year-old Middle Atlantic Regional with two early wins, a spot in the playoffs and focusing on the No. 1 seed spot.

Cal Ripken Fitchburg: Tigers are on a roll (05/2011): Staff report Andy Serrano tripled and scored twice as the British American Club Tigers defeated the NEPA Red Sox, 8-5, on May 18 to continue their excellent start to the Cal Ripken Fitchburg baseball season.

Baseball's 'Iron Man' Cal Ripken Plays Not My Job (01/2011): The Hall of Famer Baltimore Oriole holds the record for most consecutive games played. But at all 2,632 games, he was wearing pants, so does it really count as a "streak"? Ripken answers three questions about real streakers in sports.

Brett Favre's streak trumps Cal Ripken's (12/2010): The bottom line is this: You can play a nine-inning baseball game and trot back into the clubhouse at the end of the night with nary a bruise, a ding or even, sometimes, a sweat.

Cal Ripken meeting (11/2010): There will be a meeting for the Linton Boys Cal Ripken Baseball League a 7 p.m. Thursday, Dec. 9 at the Linton Elks Lodge. The meeting is for officers, coaches and any interested persons.