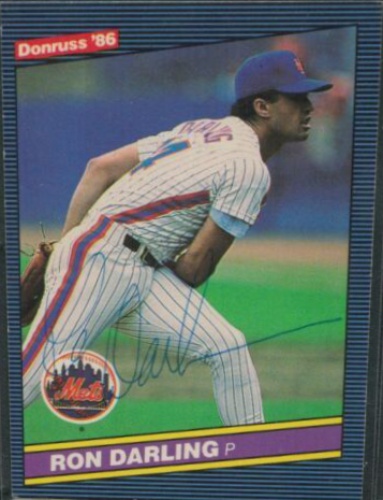 Ronald Maurice Darling Jr. (born August 19, 1960) is an American former professional baseball player and current television sports color commentator. He played in Major League Baseball (MLB) as a right-handed pitcher from 1983 to 1995, most notably as a member of the New York Mets team that won the 1986 World Series. Since 2006, he has been the co-lead color commentator for Mets broadcasts on SNY alongside former teammate Keith Hernandez. More about Ron Darling

Current items with a signature of Ron Darling

These are the most current items with a signature of Ron Darling that were listed on eBay and on other online stores - click here for more items.

Traded items with a signature of Ron Darling

If you're interested in Ron Darling Rookie cards you might want to take a look at our sister site that specializes in Baseball Rookie Cards only.

The most expensive item with a signature of Ron Darling (Ron Darling Game Used Signed Cleats NY Mets) was sold in December 2019 for $275.00 while the cheapest item (METS SIGNED RON DARLING SPORTS ILLUSTRATED PHOTO SI) found a new owner for $0.01 in January 2009. The month with the most items sold (31) was June 2022 with an average selling price of $13.50 for an autographed item of Ron Darling. Sold items reached their highest average selling price in August 2008 with $75.00 and the month that saw the lowest prices with $0.99 was August 2009. In average, an autographed item from Ron Darling is worth $10.50.

Most recently, these items with a signature of Ron Darling were sold on eBay - click here for more items.

Dykstra's past cited as suit vs. Darling dismissed (06/01/20): Lenny Dykstra's defamation and libel lawsuit against Ron Darling was dismissed Friday.

Hall of Fame Takes Another Swing at an Underappreciated Era (12/07/19): Ted Simmons and Dale Murphy are among 10 candidates for election by the Veterans Committee, whose choices will be announced on Sunday. The former pitcher Ron Darling offered his thoughts on the seven he faced.

Ron Darling’s Matt Harvey expectations: ‘Righty Kershaw’ (03/05/15): Matt Harvey’s 18 months away from the mound has done nothing to suppress Ron Darling’s expectations. The Mets fireballer makes his much-anticipated return to live action on Friday against the...

Ron Darling raves about deGrom: ‘He’s a lock’ for ROY (11/09/14): PHOENIX — Jacob deGrom is the strong front-runner to win the NL Rookie of the Year award Monday night, but maybe even that assessment is an understatement. “He’s a lock,”...

Ron Darling on Mets' Gold Glove winner Juan Lagares: 'You're the finest center f (11/04/14): Congratulations! Your weather is set to . You can change the location at any time. Don't have an account?

Ron Darling finds plenty to like in Brewers' all-stars (07/2014): As a New York Mets broadcaster, Ron Darling had an up-close look at now-Brewers all-stars Carlos Gomez and Francisco Rodriguez.

Ron Darling not happy being on Mets fan loyalty letter (05/2014): Ron Darling said he was caught off guard by the marketing letter with his name on it asking fans to pledge their support to the Mets entering the Subway Series....

Boomer & Carton: Ron Darling (02/2014): With the passing of legendary Mets broadcaster and baseball Hall of Famer Ralph Kiner, Al Dukes booked Ron Darling to join Boomer & Craig to help reflect on the envious life he led for more than 91 years.

Ron Darling: Mets need a starting pitcher (10/2013): Fresh off watching the Dodgers knock off the Braves, TBS analyst Ron Darling breaks down Los Angeles’ chances against the Cardinals and talks about the Mets’ offseason priorities with The...

Boomer & Carton: Ron Darling Clears The Air (09/2013): Before the trio could get to the business of baseball, Craig and Ron sorted out a little riff with regards to Ike Davis, as Ron explained how much he thinks of the Mets first baseman.

Ron Darling no fan of NFL Draft (04/2013): Everyone might be fired up about the NFL Draft ... but that's not the case for ex-New York Mets pitcher and current broadcaster Ron Darling.

B&C Morning Show: Ron Darling Talks About POTP Nomination & Mets (06/2012): Clearly Darling is aware, and worthy of his nomination for this year's 'Pulse of the People' award, but when asked about it he did his best to downplay the honor bestowed upon him.

B&C Morning Show: Craig Wonders If Ron Darling Is Worthy (05/2012): Like Boomer and Craig, Darling too is one of the nominees for this year's 'Pulse of the People' award -- and Craig's not really sure why.

B&C Morning Show: Ron Darling Is Good Looking And Knows Baseball (04/2012): Ron Darling is a former Mets pitcher, current analyst on SNY and lifelong friend of the Boomer & Carton Morning Show, so he joined the guys just before 8 a.m. to break it all down.

B&C Morning Show: Mets Analyst Ron Darling Serves His Time, Enters The Allstate (07/2011): After chatting with Daniel Murphy about tonight's Phillies-Mets game, the guys welcomed Ron Darling into the Allstate Studio to get the perspective of a former player/current analyst, which Darling certainly is.

Ron Darling: Davey Johnson To Nationals Spells Trouble For Mets (06/2011): 68-year-old Davey Johnson, who will be forever remembered in New York for leading the Mets to the 1986 World Series title, is returning to the dugout -- for the Nationals. "If you're a Mets fan, it's a sad day," Ron Darling told the New York Daily News.

30 Years Ago, Frank Viola And Ron Darling Pitched A Classic (05/2011): They were tough kids, New Yorkers many of them, and they played a rather loud brand of baseball.

HOT STOVE BREAKFAST: Yale greats Ron Darling and Rich Diana return to New Haven, (01/2011): NEW HAVEN — It was less of a hot stove morning than a family visit with two of Yale’s sports giants, teammates, and later professional athletes who reached the pinnacle of their respective sports.