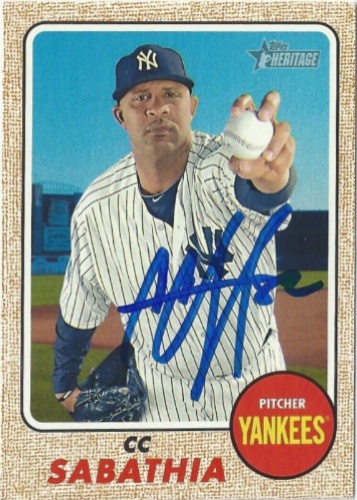 Current items with a signature of CC Sabathia

These are the most current items with a signature of CC Sabathia that were listed on eBay and on other online stores - click here for more items.

Traded items with a signature of CC Sabathia

If you're interested in CC Sabathia Rookie cards you might want to take a look at our sister site that specializes in Baseball Rookie Cards only.

The most expensive item with a signature of CC Sabathia (Signed CC Sabathia Nike game used glove NY Yankees COA) was sold in May 2012 for $2200.00 while the cheapest item (CC Sabathia Autographed 2000 Yearbook BREWERS, INDIANS) found a new owner for $0.95 in October 2008. The month with the most items sold (70) was October 2009 with an average selling price of $42.49 for an autographed item of CC Sabathia. Sold items reached their highest average selling price in April 2018 with $159.99 and the month that saw the lowest prices with $1.39 was January 2008. In average, an autographed item from CC Sabathia is worth $34.99.

Most recently, these items with a signature of CC Sabathia were sold on eBay - click here for more items.

Marlins' Jazz Chisholm says he wants to homer off Zac Gallen, pitcher he was tra (04/17/21): Chisholm talked about his desire to take Gallen deep as part of an appearance on CC Sabathia's R2C2 podcast

Who will be the Yankees' next captain? CC Sabathia says Aaron Judge or Gleyber T (05/2020): A pair of Bronx Bombers got a vote of confidence from their former teammate

CC Sabathia says Astros and Red Sox might have cheated Yankees out of two World (01/2020): The retired lefty is none too pleased with the recent sign-stealing scandals

CC Sabathia talked to Gerrit Cole about signing with Yankees, says for the right (11/2019): Sabathia says Cole will 'pitch on the moon' if they offer him enough

CC Sabathia better but not good enough as Yankees fall to O’s (04/2015): BALTIMORE — Remember the last Yankees postseason victory? It was in Game 5 of the 2012 ALDS against the Orioles at Yankee Stadium and CC Sabathia pitched like the ace...

CC Sabathia goes off about spring training stats (03/2015): CC Sabathia is having a brutal spring, but he certainly isn’t concerned about what that might mean for his regular season.

Klapisch: Yanks bracing for worst when it comes to CC Sabathia (02/2015): But no one’s expectations are particularly robust when it comes to the soon-to-be 35-year old left-hander, who just happened to gain 10 pounds this winter and now rocks the scales at 305.

CC Sabathia 'freaks out' at airport, police needed (12/2014): Yankees pitcher CC Sabathia lost his cool this weekend at Newark Airport. Sabathia was late to his flight, and became very upset about it. According to TMZ, the Port Authority police had to be called after the big lefty “started freaking out” on airline staff.

CC Sabathia On WFAN: Losing Weight Is Bad? Tell That To My Knee (08/2014): After docs removed a bone spur last week, Sabathia acknowledged his knee probably wouldn't return to 100 percent. It wasn't much of a surprise when the comment made headlines.

CC Sabathia hopeful he can pitch in 2015 (07/2014): Sidelined with a right knee injury, the New York Yankees’ CC Sabathia spoke to reporters Saturday morning for the first time since the team announced he will have season-ending surgery Wednesday.

Why Joba Chamberlain's smiley face tattoo is better than CC Sabathia's ink (02/2014): We think the former Yankee's tattoo beats what Sabathia had inked on his back.

Roundup: Steven Seagal Adopted a Stray Dog, Sexting Tales & Why Skinny CC Sabath (11/2013): Skip down to the coach dancing video if you want to laugh.

CC Sabathia's organization donates backpacks to Vallejo students (08/2013): This is the fifth year that the New York Yankees star's PitCCh In Foundation has handed out backpacks and school supplies to every first- and second-grader in the district.

Yankees notebook: CC Sabathia struggles again, loses to Rays (07/2013): NEW YORK — On the same day in which the Yankees took a step toward filling their need for a right-handed power bat by trading for Alfonso Soriano, a newer problem continued to manifest itself.

CC Sabathia's 'Christmas Caravan' stops at Vallejo senior center (12/2012): When it comes to the holidays, the elderly are often left out in the cold.

Yankees pitcher CC Sabathia, plus volunteers and Tiki Barber, come out to help r (11/2012): Yankees pitching ace CC Sabathia and former New York Giants star Tiki Barber rolled up their sleeves and got their hands dirty Saturday helping to repair the Hoboken Boys and Girls Club, which was devastated by Hurricane Sandy.

B&C Morning Show: CC Sabathia Thinks Yankees Will Be Fine (07/2012): C.C. Sabathia is scheduled to make his next start for the Yankees Friday night, when the Mariners come to the Bronx.

Yankees notebook: CC Sabathia gets win in front of 'home' crowd (05/2012): OAKLAND — The cheering section was in the right-field seats. Some friends. Some family. Some random acquaintances. CC Sabathia wasn’t exactly sure who had the tickets, he only knew he’d bought 200 of them.

CC Sabathia comes up big to defeat Detroit, 6-2 (04/2012): The Yankees have no replacement for CC Sabathia. On a day they shuffled the back of their rotation, the Yankees leaned on their only true ace for a 6-2 win against the Tigers on Sunday.

B&C Morning Show: CC Sabathia Is Feeling Good & He Too Has, ‘Linsanity’ (02/2012): CC Sabathia will be leaving for Tampa Bay this Saturday, but before that he called into the talk with Boomer & Craig about his off-season, the Yankees upcoming season, 'LINsanity' and much more.

CC Sabathia remains a Yankee (10/2011): CC Sabathia decided to stay with the Yankees rather than test the free-agent market, agreeing Monday to a new deal that adds $30 million to his existing contract and will pay $122 million over the next five years.

Justin Verlander-CC Sabathia duel will have to wait (09/2011): The playoff opener between the Tigers and Yankees was suspended because of rain in the second inning Friday, probably wiping out the ace of each pitching staff for a few days. Justin Verlander started for Detroit...

CC Sabathia, Yankees Beat Red Sox 5-2 To Close Within One Game In A.L. East Stan (08/2011): BOSTON -- CC Sabathia finally snapped out of his Red Sox funk, and it took an extra effort to do it. The big Yankees left-hander struck out 10 on Tuesday night, throwing a season-high 128 pitches in six innings to beat Boston for the first time in five tries and lead New York to a 5-2 victory.

CC Sabathia flirts with perfect game, strikes out 14 Mariners in 4-1 win (07/2011): CC Sabathia survived a rain delay in the sixth, but lost his bid for a perfect game in the seventh.

CC Sabathia Not Concerned With Yankees Role As Underdogs (03/2011): Darth Vader's theme music blared from the speakers at Yankee Stadium while the team worked out under sunny skies as if the Yankees needed a reminder that they are indeed still the "Evil Empire" and not the underdogs that they have been labeled.

CONCORD, Calif. -- CC Sabathia hoped to be pitching alongside close pal Cliff Le (12/2010): Instead, Lee turned down an extra US$30 million to return to the Philadelphia Phillies with a five-year deal that guarantees him $120 million.