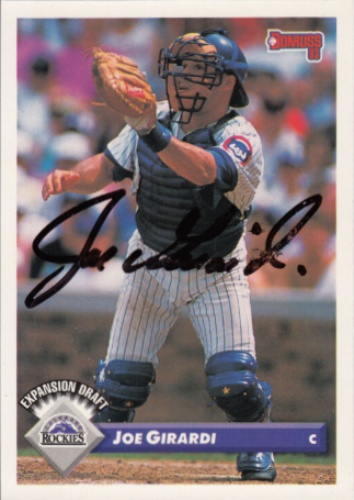 Joseph Elliott Girardi (born October 14, 1964) is an American professional baseball former player and manager in Major League Baseball (MLB). Girardi played the catcher position for the Chicago Cubs, Colorado Rockies, New York Yankees, and St. Louis Cardinals during a big league playing career that spanned from 1989 to 2003. He won three World Series championships with the Yankees in the 1990s and served as the catcher for both Dwight Gooden's no-hitter and David Cone's perfect game. More about Joe Girardi

Current items with a signature of Joe Girardi

These are the most current items with a signature of Joe Girardi that were listed on eBay and on other online stores - click here for more items.

Traded items with a signature of Joe Girardi

If you're interested in Joe Girardi Rookie cards you might want to take a look at our sister site that specializes in Baseball Rookie Cards only.

The most expensive item with a signature of Joe Girardi (JOE GIRARDI SIGNED 2009 WS YANKEES HOME JERSEY JSA) was sold in September 2013 for $299.99 while the cheapest item (Joe Girardi Signed Baseball Card) found a new owner for $0.01 in August 2014. The month with the most items sold (26) was November 2009 with an average selling price of $6.28 for an autographed item of Joe Girardi. Sold items reached their highest average selling price in August 2017 with $79.97 and the month that saw the lowest prices with $0.99 was July 2008. In average, an autographed item from Joe Girardi is worth $13.50.

Most recently, these items with a signature of Joe Girardi were sold on eBay - click here for more items.

Ex-Phils manager Girardi joining Cubs' TV booth (08/17/22): Joe Girardi has joined Marquee Sports Network as a game analyst for the Cubs, one of his former teams.

Five reasons Phillies have turned around their season under interim manager Rob (08/15/22): The Phillies, after firing Joe Girardi, are hoping to get back to the postseason for the first time since 2011

Batting Around: Who will be the next MLB manager to get fired? (06/09/22): Joe Girardi and Joe Maddon have both lost their jobs in the last week

The Phillies Fire Manager Joe Girardi, but Their Flaws Run Deeper (06/03/22): Philadelphia’s expensive roster has underperformed — to put it mildly. The team hopes a “different voice” is the answer after dismissing Joe Girardi.

Phillies fire Joe Girardi: Three ways Philadelphia can try to salvage its season (06/2022): Things may look bleak for the Phillies, but it's still early enough in the season to turn things around

Phillies' Joe Girardi unconcerned about job security despite recent poor play an (05/2022): Girardi is in the final guaranteed year of his contract

Phillies' Joe Girardi says he 'wouldn't mind' automated strike zone after Angel (04/2022): The Phillies fell to the Brewers on Sunday night, and Hernandez's strike zone was a problem

Girardi, Quinn ejected from Phils' game vs. Nats (09/2020): Phillies manager Joe Girardi was ejected along with center fielder Roman Quinn for arguing a call by plate umpire Junior Valentine on Monday against the Nationals.

Phillies will call up top pitching prospect Spencer Howard on Sunday (08/2020): Manager Joe Girardi indicated Howard could pitch in a variety of roles

Girardi returns to Bronx ahead of Phillies debut (07/2020): About to start his first season as Philadelphia's manager, Joe Girardi was back at Yankee Stadium to lead the Phillies in an exhibition game against New York ahead of his team's pandemic-delayed opener Friday at home against Miami.

Phillies ace Nola scratched from start due to flu (03/2020): Phillies ace Aaron Nola was scratched from his scheduled start Monday against the Yankees due to the flu. Manager Joe Girardi said with an off day Wednesday, Nola may rejoin the team on Thursday.

'Strategy is sacred': Managers weigh in on three-batter rule, sign-stealing scan (12/2019): Joe Maddon, Joe Girardi, Dave Martinez and others give their takes on the big issues facing the game.

Former Miami Marlins president gives his take on A-Rod, Bonds, Girardi and much (12/2018): In part 2 of a 3-part series, former Marlins president David Samson assessed the job that Bruce Sherman and Derek Jeter are doing as owners and myriad other topics.

Yankees' Joe Girardi not worried about Alex Rodriguez playing first base Saturda (04/2015): Girardi says he has no concerns of A-Rod at first base

Yankees' Joe Girardi on Masahiro Tanaka's spring training: 'I feel a little bett (03/2015): Handling $155 million isn't something you rush, after all.

5 Yankees things to know today: Joe Girardi to set pitching schedule (02/2015): TAMPA, Fla. -- Here's what you need to know about Yankees spring training heading into Saturday: 1. Your daily diet of Alex Rodriguez: With the team's first spring training game looming Tuesday, it's unclear what to expect from A-Rod in...

Yankees' Joe Girardi hopeful for Robert Refsnyder, Jose Pirela (12/2014): Congratulations! Your weather is set to . You can change the location at any time. Don't have an account?

A-Rod, Joe Girardi talked about 1B (10/2014): Alex Rodriguez will arrive at spring training with some new luggage -- a first base mitt.

Yankees Manager Joe Girardi: A-Rod Has To Show He Can Still Play (09/2014): The Yankees expect Alex Rodriguez to play third base next season but want the suspended star to prove during spring training he deserves to have his position back after a one-year absence.

Caption contest: Joe Girardi talking to Joba Chamberlain (02/2014): LAKELAND, FLORIDA — Walking around before today’s Yankees-Tigers game and I came across this lovely reunion:     What do you suppose Girardi was explaining to Joba?

Yankees' Joe Girardi voted fourth-best AL manager — did he deserve it? (11/2013): Kept Yankees in playoff chase despite as season marred by injuries and controversy

Yankees skipper Joe Girardi looks to future (09/2013): Yankees manager Joe Girardi won’t need long to decide his future.   Wrapping up his sixth season with New York at the end of a three-year deal, Girardi said Sunday he wants to discuss his future with his wife and three school-aged children.

Joe Girardi managing Yankees' crowded outfield (05/2013): New York Yankees manager Joe Girardi looks on as he talks to the media in the dugout during batting practice before a baseball game, Wednesday, May 22, 2013, in Baltimore.

Tickets On Sale For WFAN’s Hot Stove Breakfast With Manager Joe Girardi (11/2012): Get ready for a Hot Stove breakfast with Bronx Bombers manager Joe Girardi, which will be hosted by WFAN host Mike Francesa on Tuesday, December 11, at the Hard Rock Cafe in Times Square.

Keidel: Buck Showalter And Joe Girardi Make An Interesting Juxtaposition (09/2012): Joe Girardi can’t jam the reset button and make his team young and voracious again. But he is expected to beat Baltimore. And if he doesn’t, he could go hungry.

B&C Morning Show: Joe Girardi, Manager Of The Year? (08/2012): Craig believes that Yankees' skipper Joe Girardi deserves to be Manager of the Year. But when the guys went to the phone lines, the very first caller had a problem with that statement, as did Boomer himself

In one inning, Yankees see best and worst of Joe Girardi (06/2012): Indecision leads to rare blunder for bullpen master

Yankees manager Joe Girardi craves sugar cereal (05/2012): Joe Girardi recalls being about 8 when a train derailed behind his grandparents' farm and left enough stray boxes of Cap'n Crunch cereal to feed him and his four siblings for a full year.

Yankees: Does Joe Girardi's binder include a page on squeeze plays? (04/2012): If it does, it's gathering dust

B&C Morning Show: Joe Girardi Makes His Morning Show Debut (01/2012): Joe Girardi joined Boomer & Craig for the first time ever this morning and had a nice little chat about baseball, football and much more.

Bradley: Yankees' Joe Girardi faces Detroit Tigers with caution, knowing the dan (09/2011): Nothing should make a manager confident in the ALDS

Yankees vs. Red Sox: Joe Girardi not sorry about length of Tuesday's win (08/2011): Also, Russell Martin is out of Yankees' lineup tonight with thumb injury

Joe Girardi: Road Trippin’ Yankees Are ‘Going To Play Better’ (05/2011): The high-priced 27-21 Yankees know they haven't played up to par. But they're in good position to pull away from the Red Sox in the AL East if they can get a streak going. “I think we’re going to play better,” said manager Joe Girardi.