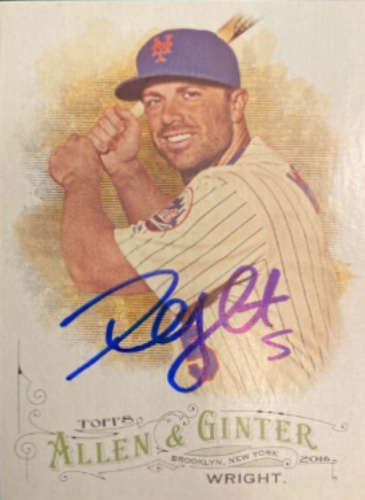 David Allen Wright (born December 20, 1982) is an American former professional baseball third baseman who played his entire 14-year Major League Baseball (MLB) career for the New York Mets. He was drafted by the Mets in 2001 MLB draft and made his MLB debut on July 21, 2004 at Shea Stadium. Wright was nicknamed "Captain America" after his performance in the 2013 World Baseball Classic where he led the tournament with 10 RBI and a .438 batting average. More about David Wright

Current items with a signature of David Wright

These are the most current items with a signature of David Wright that were listed on eBay and on other online stores - click here for more items.

Traded items with a signature of David Wright

If you're interested in David Wright Rookie cards you might want to take a look at our sister site that specializes in Baseball Rookie Cards only.

The most expensive item with a signature of David Wright (David Wright Rare Signed Lopa Lmtd Edt Art MLB NY Mets) was sold in October 2009 for $3500.00 while the cheapest item (METS DAVID WRIGHT SIGNED ESPN MAGAZINE AUTOGRAPH) found a new owner for $0.01 in January 2011. The month with the most items sold (51) was August 2021 with an average selling price of $64.99 for an autographed item of David Wright. Sold items reached their highest average selling price in June 2017 with $239.99 and the month that saw the lowest prices with $1.99 was January 2019. In average, an autographed item from David Wright is worth $41.00.

Most recently, these items with a signature of David Wright were sold on eBay - click here for more items.

David Wright takeaways, including comparing this Mets group to 2006 team (03/31/22): David Wright, one of the most beloved players in Mets history, was in Port St. Lucie, Fla. on Thursday, spending the day with the team as a guest instructor.

David Wright says this Mets' team is like the 2006 squad with better pitching | (03/31/22): Former New York Met David Wright compares this Mets roster to the 2006 team, saying they have similar offensive upside with far better pitching. Wright also says he will not be participating in Old Timers' Day because he doesn't feel old enough yet.

Why David Wright didn't make this writer's Mets Mt. Rushmore | Baseball Night in (03/10/22): John Harper and Jim Duquette both named their players who made their Mets Mt. Rushmore list. Duquette and Harper had similar names on the list except one of them didn't have David Wright on there and he explains why. Watch more Baseball Night in NY: https://sny.tv/shows/baseball-night-in-ny About Ba

David Wright on Jenrry Mejia: 'He needs to be punished' (04/2015): New York Mets teammates reacted to the 80-game suspension of closer Jenrry Mejia on Saturday, expressing disappointment after Mejia tested positive for the anabolic steroid Stanozolol.

Klapisch: Mets' David Wright facing make-or-break season (03/2015): The Mets had every right to privately wonder if they’d over-committed to David Wright in 2012 when he signed an eight-year, $138 million contract.

David Wright Feeling Fine And Ready To Mash In Middle Of Mets’ Lineup (02/2015): For all of the statistical analysis used in baseball today, David Wright sees things very simply: "There's no question in my mind, if I do what I'm capable of doing, we're a better offense."

David Wright says rehab from shoulder injury is going well (10/2014): Wright is expected to be re-evaluated in a couple of weeks and hopes to avoid surgery.

David Wright has ligament damage in his shoulder (09/2014): An MRI reveals it. Also: why did he just get the MRI now?

Meet Cambridgeshire's David Wright, the determined dad who lost six-and-a-half s (07/2014): Following life-changing back surgery, David Wright has lost a third of his body weight and now has his sights set on the gruelling Ironman triathlon – one of the world’s toughest challenges. The determined dad-of-two reveals how he’s turned his life around.

Mets' David Wright plans to return Friday, will miss Atlanta series (06/2014): He will rest and undergo treatment, but without a cortisone shot, with a planned return Friday against the Rangers.

David Wright anticipates power to return at plate as weather warms (04/2014): Mets third baseman has 28 hits this season -- and 24 of them are singles

‘December is a big month’ - admits David Wright (12/2013): The month of December could be make-or-break for Colchester United.

David Wright still expects the Mets to be aggressive this offseason (11/2013): Wright: "I'm expecting us to field a much better team this year than we have in years' past."

David Wright back in starting lineup Saturday (09/2013): David Wright gave the Mets quite a scare Thursday when he was hit in the helmet by a pitch, but Kristie Ackert of the New York Daily News passes along word that he’s back in the starting lineup this afternoon against the Brewers. The good news is that Wright passed all of his concussion tests,…

David Wright injury update: Mets 3B to begin rehab this weekend (08/2013): Loading... "You don't want to go into the offseason with the uncertainty of an injury. And most importantly, I don't want this to affect me next year or the years to come. So I have to rehab this properly, be diligent with it, stay on top of it.

David Wright avoids injury after broken bat hits him in the head on backswing (07/2013): Wright's bat fractured into two pieces and the barrel hit him on the backswing

David Wright given day off for first time this season as Mets visit Rockies (06/2013): Wright started the Mets' first 74 games at third base

David Wright, New York Mets Player, Voted CougarLife.com's 'Hottest Cub' (05/2013): New York Mets star David Wright will have to wait to see if he is chosen to play in the All-Star Game. But he already has the cougar vote.

Mets notes: David Wright doesn't start (04/2013): The third baseman felt some spasms in his neck against the Phillies on Sunday.

Mets notes: Carlos Beltran says David Wright shouldn't change (02/2013): Beltran: "There’s nobody [Wright] needs to impress. He just has to go out there and play the game and do the best he can to help the team.”

New York Mets star David Wright officially off the market as he announces engage (01/2013): The 30-year-old, who first went public with the little-known brunette in 2008, told ESPN that he popped the question over the holidays.

Baseball notebook: Mets pick up options on David Wright, R.A. Dickey (10/2012): The Mets have picked up the contract options for All-Stars David Wright and R.A. Dickey. The Mets said Wednesday they were not planning to make an official announcement of the moves that were really just a formality.

Before Mets win on Ike Davis HR, GM says he wants to keep David Wright, R.A. Dic (08/2012): Asked about the future of his team’s two marquee names – David Wright and R.A. Dickey – GM Sandy Alderson offered his most optimistic take yet on the upcoming negotiations.

Hartnett: David Wright Comes Through For Mets (07/2012): David Wright pulled the Mets from the depths of despair by snapping their losing streak and has been the Mets' go-to guy all year.

Mets notebook: David Wright's contract not urgent matter (05/2012): NEW YORK — The money will ultimately will come from his family’s pockets. It will require a princely sum to retain David Wright, certainly more than the roll of $5 bills his father pulled from his pants during spring training.

David Wright's Place in the Mets' Past, Present and Future (04/2012): A milestone makes you think about what's next for Wright and the Mets. Photo Credit: Getty Images

No pain is a gain for the Mets' David Wright, Johan Santana | Baseball (03/2012): They sat side by side in the visitors' training room at Roger Dean Stadium, one with the left side of his abdomen wrapped in ice and the...

David Wright's Got a Lot on His Hands This Season (02/2012): A big year from Wright would make everything easier for the Mets.

2011 MLB Trade Rumors – David Wright to Philadelphia Phillies? (11/2011): Several MLB teams have needs and wants this winter, and though Philadelphia finished with the best regular season record in baseball last year, youth needs adding to the roster, or the team could suffer . . .

For Mets now, focus is on David Wright, Jose Reyes and others (08/2011): Mets' primary concern now is progress now that season has fizzled

David Wright and What Might Have Been (07/2011): Sweep of Reds is bittersweet.

David Wright Could Return To Mets’ Red-Hot Lineup By Mid-July (06/2011): Like the Mets need more offense? David Wright, on the mend from a stress fracture in his lower back, could be ready for a rehab assignment in "seven, eight days," Mets manager Terry Collins said on Wednesday.

Nine Baseball Things We Learned This Weekend, Starring David Wright’s Supportive (05/2011): Another weekend of baseball is in the books — the Yankees lost two out of three in Seattle, then won their series opener in Oakland, while the Mets lost two out of three to the Phillies, then won their series opener against Pittsburgh — so what did we learn over the past few days?

Your comments: Mets fans discuss whether David Wright is trade bait or a long-te (04/2011): Highlighting the best comments from the NJ.com community

Serby's Sunday Q & A with... David Wright (03/2011): The Post's Steve Serby chatted with the Mets' 28-year-old, All-Star third baseman. Q: Is the division winnable? A: No question the division is winnable. We have a clubhouse of guys who truly believe in that. Q: Expectations are low on the outside. A: The expectations inside this clubhouse are...

Mets third baseman David Wright works to improve his fielding (02/2011): Defense is the focus now that his hitting has improved