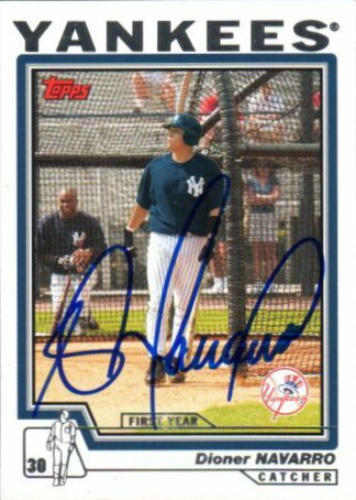 Current items with a signature of Dioner Navarro

These are the most current items with a signature of Dioner Navarro that were listed on eBay and on other online stores - click here for more items.

Traded items with a signature of Dioner Navarro

The most expensive item with a signature of Dioner Navarro (Dioner Navarro Game Used & SIGNED Louisville Slugger Bat New York Yankees) was sold in July 2020 for $75.00 while the cheapest item (DIONER NAVARRO SIGNED TOPPS CARD RAYS HOT YOUNG STAR) found a new owner for $0.01 in July 2008. The month with the most items sold (40) was October 2008 with an average selling price of $14.99 for an autographed item of Dioner Navarro. Sold items reached their highest average selling price in July 2020 with $75.00 and the month that saw the lowest prices with $0.99 was March 2012. In average, an autographed item from Dioner Navarro is worth $9.99.

Most recently, these items with a signature of Dioner Navarro were sold on eBay - click here for more items.

Dioner Navarro Addresses Trade Speculation (03/22/15): Dioner Navarro was gearing up for his second season as the Blue Jays’ starting catcher when Toronto decided to make a massive splash by signing Russell Martin in November. Navarro, an offensively-gifted catcher is his own right, was understandably unhappy with the … Continue reading →

MLB trade rumors: Tigers, Diamondbacks reportedly interested in Dioner Navarro (03/10/15): The catcher would like to move on from Toronto now that he won't be starting every day behind the plate.

Dioner Navarro Says Tigers, D'Backs Have Shown Interest (03/10/15): Blue Jays backstop Dioner Navarro says that his understanding from his agent is that the Tigers and Diamondbacks are among the teams that have expressed interest in trading for him, Bob Elliott of the Toronto Sun reports. Navarro is currently … Continue reading →

Dioner Navarro Addresses Trade Speculation (03/2015): Dioner Navarro was gearing up for his second season as the Blue Jays’ starting catcher when Toronto decided to make a massive splash by signing Russell Martin in November. Navarro, an offensively-gifted catcher is his own right, was understandably unhappy with the … Continue reading →

Toronto Blue Jays’ Dioner Navarro wants to be traded to a team where he can catc (02/2015): Back in November, before the ink dried on Russell Martin’s new contract, Dioner Navarro told the Blue Jays he wanted out

Dioner Navarro, Kevin Pillar get some rest (09/2014): Blue Jays manager John Gibbons made some changes to what has become his everyday lineup for the game in Baltimore on Wednesday.

Dioner Navarro making most of opportunity as No. 1 catcher for Jays (08/2014): Dioner Navarro had stripped off the catching gear and was in his chair at his locker late Wednesday night.

Blue Jays catcher Dioner Navarro careful with quad (05/2014): When he hit a pinch-hit, RBI single on Sunday in Pittsburgh and limp-jogged to first base, Dioner Navarro didn't look like a guy who is going to be ready to catch nine innings anytime soon.

Dioner Navarro an upgrade at catcher, Jays GM says (12/2013): Alex Anthopoulos was prepared to stay the course with catcher J.P Arencibia, until he discovered the Toronto Blue Jays could make an upgrade behind the plate with free agent Dioner Navarro. The Jays officially parted way with Arencibia on Monday by declining to tender a contract offer.

Dioner Navarro's sacrifice fly lifts Cubs over Pirates in 11 innings (07/2013): The Pirates tied the score in the ninth on a two-out, two-strike solo home run by Starling Marte.

Dodgers defeat Florida Marlins 3-2 on Dioner Navarro's ninth-inning RBI single (05/2011): BASEBALL: Dodgers struggle again at plate, but come through in clutch to beat Florida. Nearly two full months into the season the Dodgers are still searching for an offensive identity.

Dioner Navarro has side muscle strain; Tim Redding removed from start with back (03/2011): Status of Redding, a candidate to be the fifth starter in the rotation, is unclear. Backup catcher Navarro appears unlikely to be ready for start of season. Reporting from Tucson — The final days of spring training have been the most dangerous for the Dodgers.