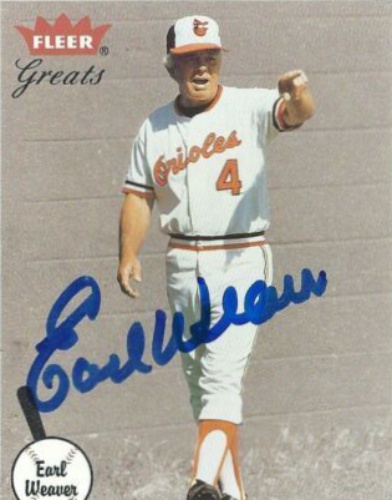 Earl Sidney Weaver (August 14, 1930 – January 19, 2013) was an American professional baseball manager, author, and television broadcaster. After playing in minor league baseball, he retired without playing in Major League Baseball (MLB). He became a minor league manager, and then managed in MLB for 17 years with the Baltimore Orioles (1968–1982; 1985–86). Weaver's style of managing was summed up in the quote: "pitching, defense, and the three-run homer." He did not believe in placing emphasis on "small ball" tactics such as stolen bases, hit and run plays, or sacrifice bunts. He was inducted into the Baseball Hall of Fame in 1996. More about Earl Weaver

Current items with a signature of Earl Weaver

These are the most current items with a signature of Earl Weaver that were listed on eBay and on other online stores - click here for more items.

Traded items with a signature of Earl Weaver

If you're interested in Earl Weaver Rookie cards you might want to take a look at our sister site that specializes in Baseball Rookie Cards only.

The most expensive item with a signature of Earl Weaver (EARL WEAVER (HOF 96) Signed Orioles Authentic Baseball Jersey -PSA Authenticated) was sold in June 2014 for $975.00 while the cheapest item (Signed Earl Weaver Photo ~ Baltimore Orioles) found a new owner for $0.18 in March 2014. The month with the most items sold (76) was January 2013 with an average selling price of $26.63 for an autographed item of Earl Weaver. Sold items reached their highest average selling price in March 2019 with $49.99 and the month that saw the lowest prices with $0.99 was January 2010. In average, an autographed item from Earl Weaver is worth $18.22.

Most recently, these items with a signature of Earl Weaver were sold on eBay - click here for more items.

Nats Harper tossed for the second time in eight days (05/21/15): He then tried an Earl Weaver move by twice attempting — not so well — to kick dirt on home plate. “I can’t explain it,” said Williams, when asked why Harper was ejected. “I don’t believe there’s anything that warrants throwing him out of th ...

Deacons to get pitching help for next season (05/20/15): No less of an authority than Hall-of-Fame manager Earl Weaver once observed that, in baseball, “the only thing that matters is what happens on the little hump in the middle of the field.” Once again, the Wake Forest baseball team suffered a pratfall ...

The Strangest Scenes in Sports Since 2000 (05/15/15): Earl Weaver, Lou Piniella, Bobby Cox. They are all names of baseball managers synonymous with some epic blowups. The one ejection that trumps them all, though? A minor league manager named Phillip Wellman, who went full crazy during a game back in 2007.

Twins reliever Blaine Boyer effective - and exciting - in set-up role (05/14/15): With Harpo Marx curls and a bushy mustache, Stanhouse became known as "Fullpack" to Orioles manager Earl Weaver, a dugout smoker who puffed away whenever Stanhouse walked batters to create unforced turmoil. "He's not turning into a Don Stockhouse

Nats Harper tossed for the second time in eight days (05/2015): He then tried an Earl Weaver move by twice attempting — not so well — to kick dirt on home plate. “I can’t explain it,” said Williams, when asked why Harper was ejected. “I don’t believe there’s anything that warrants throwing him out of th ...

Earl Weaver, Jr. (01/2015): Funeral Services for Earl Robert "Bob" Weaver, Jr. of Montgomery, Texas will be held on Saturday, January 10, 2015 at 1:00 P.M. in The Chapel at Conroe Funeral Directors with Ricky Carrell officiating

Bernie: Earl Weaver a legend in two cities (08/2014): His St. Louis baseball roots led to a stellar run in Baltimore, where he's an Orioles franchise icon.

Memories of Earl Weaver one year after the O's Hall of Fame manager's passing (01/2014): Eduardo A. Encina shares his memories of interviewing Earl Weaver for the first time, including his thoughts on Chris Davis before his breakout season.

Local singer up close for Earl Weaver ceremony in Baltimore (04/2013): BALTIMORE — There was a silver lining in the clouds for Sara Lauver after rain postponed Friday night’s game between the visiting Los Angeles Dodgers and Baltimore Orioles.

What if Everyone Managed Like Baseball Hall of Famer Earl Weaver? (01/2013): When I was just a boy, long before I ran a social enterprise that bears Peter Drucker?s name and seeks to make organizations more effective, the word ?manager? meant one thing to me: Earl Weaver.

Statue of Earl Weaver unveiled at Camden Yards (06/2012): Baseball Hall of Famer Earl Weaver waves to the crowd during the Orioles Legends Celebration ceremony before the unveiling of a statue in his honor Saturday, June 30, 2012 in Baltimore.

Earl Weaver talks about his statue (12/2011): Had a chance today to speak to Earl Weaver, the Orioles’ Hall of Fame manager who will be one of the club’s six icons to be honored with a bronze statue this year at Camden Yards.

Former Orioles manager Earl Weaver puts prized possessions on the auction block (05/2011): BALTIMORE - When Earl Weaver cleans out his garage, he doesn't hold a yard sale. He has a headline-grabbing event sure to make collectors drool.

Orioles Insider: Earl Weaver to throw out Monday's first pitch (03/2011): Jeff Zrebiec has been with The Sun since 2000 and began covering the Orioles during the 2005 season. A New Jersey native, he was a 2001 graduate of Loyola University in Baltimore.