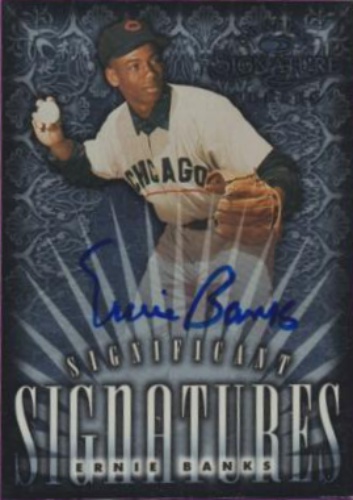 Ernest Banks (January 31, 1931 – January 23, 2015), nicknamed "Mr. Cub" and "Mr. Sunshine", was an American professional baseball player who starred in Major League Baseball (MLB) as a shortstop and first baseman for the Chicago Cubs between 1953 and 1971. He was inducted into the National Baseball Hall of Fame in 1977, and was named to the Major League Baseball All-Century Team in 1999. More about Ernie Banks

Current items with a signature of Ernie Banks

These are the most current items with a signature of Ernie Banks that were listed on eBay and on other online stores - click here for more items.

Traded items with a signature of Ernie Banks

If you're interested in Ernie Banks Rookie cards you might want to take a look at our sister site that specializes in Baseball Rookie Cards only.

Most recently, these items with a signature of Ernie Banks were sold on eBay - click here for more items.

Babe Ruth: From shirt maker to Medal of Freedom winner - Personal Liberty® (12/07/18): To hear Babe Ruth tell his story, he was the best shirt maker that the St. Mary’s Industrial School for Boys ever had. Ruth’s parents, very poor, petitioned the Baltimore …

Georgiann Potts: ‘Tis the Season (12/07/18): Writer’s Note: Those of you who have been reading these columns realize that I am a self-confessed “football-aholic” (see “Hope Springs Eternal — aka It’s Football Season!” in the September

Cubs pay tribute to Ernie Banks at unfinished bleachers (04/05/15): By Jessica Kleinschmidt. It’s finally baseball season, which means everybody is putting the last minute touches on constructing the perfect field. Wrigley Field, home of the Chicago Cubs, is in the midst of renovating not only their team, but their bleachers as well.

Judge rules Ernie Banks' will is valid (03/2015): A Cook County judge confirmed Tuesday that Ernie Banks understood exactly what he was doing when he signed his final will.

Cubs legend Ernie Banks memorialized, remembered for unwavering optimism (01/2015): Fans and friends paid tribute to legendary Chicago Cubs slugger Ernie Banks on Saturday, recalling how he helped break baseball's color barrier during a Hall of Fame career in which he won over his teammates and an entire city with the unwavering optimism he brought to the game and life.

Wrigley 100 August 22: Ernie Banks #14 Retired (08/2014): On this day in 1982, Ernie Banks’ number 14 became the first retired number in Chicago Cubs history. Banks was honored in a pre game ceremony at Wrigley Field and his remarks were as gracious as they had been at Ernie Banks Day on the same field 18 years before. ”I want to thank the […]

Ernie Banks seeking to reunite Sammy Sosa, Cubs (04/2014): Ernie Banks, who was awarded a Presidential Medal of Freedom last year, remains intent on bringing individuals and groups together: "Mr. Cub" says he is focused on facilitating a reconciliation between estranged former slugger Sammy Sosa and the team.

Cubs legend Ernie Banks will speak at Lipscomb event (03/2014): Lipscomb has hit another home run in its mission to bring in high-profile interesting guest speakers for its Don Meyer Evening of Excellence by securing legendary Chicago Cub Ernie Banks for this year's event.

Eddie Vedder Talks Cubs, the World Series and Giving His Boyhood Mitt to Ernie B (10/2013): It's no secret that Pearl Jam frontman Eddie Vedder is a lifelong baseball fan, and when the singer recently spoke to Billboard for a PJ cover story...

As Ernie Banks said, "Let's watch two!" (05/2013): I've paraphrased the former Chicago Cub great a little, but that's my mantra for today as I will be seeing two games in the MIAA Division 1-South softball tournament.

Hall of Famers Ernie Banks and Richard Dent support gay marriage in Illinois (03/2013): Two Hall of Fame athletes signed a letter supporting a gay marriage bill on its way to the Illinois House.

Comedian Bill Murray, Ernie Banks Join Fun At Ryder Cup (09/2012): More big name entertainers and sports figures will appear at upcoming events promoting the Ryder Cup golf tournament in West suburban Medinah that will be held Sept. 25-30. One of the key pre-tourney events will be occurring at the Akoo Theatre in Rosemont.

Someone must defend Ernie Banks (02/2012): Sometime about the middle of Tuesday’s Ohio Valley Conference baseball preseason teleconference, the realization hit me like a foul ball when I wasn’t looking.

The Rehabilitation Foundation of IPMR announces Mr. Cub, Ernie Banks, will be 20 (01/2012): 2012 will see Chicago Cubs legendary player, Ernie Banks coming to Peoria as the IPMR Legend at the Ballpark. One of the most well known and admired baseball stars of all time, Banks will the guest of honor during the Legend event on June 9, 2012.

Ernie Banks Statue Repaired at Bradley University (11/2011): PEORIA- It usually stands at Wrigley Field in Chicago. But today the statue of a legendary cubs baseball icon made its way to Peoria.

Ernie Banks to get civil-rights award (03/2011): Chicago Cubs Hall of Famer Ernie Banks will be honored with a prestigious Beacon of Life Award on May 14, the weekend of the Civil Rights Game between the Phillies and Braves in Atlanta.

Even at 80, there's still nobody like Ernie Banks (01/2011): Ernie Banks, forever young in the hearts and minds of longtime Cubs fans, turned 80 years old Monday. Normally this would be depressing. Like, when Wayne Gretzky, another Great One, turned 50 recently and mortality merged with reality