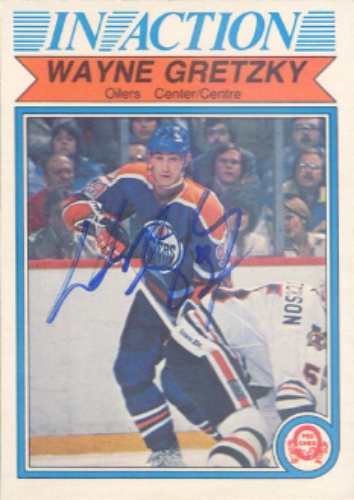 Wayne Douglas Gretzky CC (/ˈɡrɛtski/ GRET-skee; born January 26, 1961) is a Canadian former professional ice hockey player and former head coach. He played 20 seasons in the National Hockey League (NHL) for four teams from 1979 to 1999. Nicknamed "the Great One", he has been called the greatest hockey player ever by many sportswriters, players, the NHL itself, and by The Hockey News, based on extensive surveys of hockey writers, ex-players, general managers and coaches. Gretzky is the leading goal scorer, assist producer and point scorer in NHL history, and has more assists in his career than any other player scored total points. He is the only NHL player to total over 200 points in one season, a feat he accomplished four times. In addition, Gretzky tallied over 100 points in 16 professional seasons, 14 of them consecutive. At the time of his retirement in 1999, he held 61 NHL records: 40 regular season records, 15 playoff records, and 6 All-Star records. More about Wayne Gretzky

Current items with a signature of Wayne Gretzky

These are the most current items with a signature of Wayne Gretzky that were listed on eBay and on other online stores - click here for more items.

Traded items with a signature of Wayne Gretzky

If you're interested in Wayne Gretzky Rookie cards you might want to take a look at our sister site that specializes in Hockey Rookie Cards only.

Most recently, these items with a signature of Wayne Gretzky were sold on eBay - click here for more items.

Alex Ovechkin's incredible longevity puts him within reach of Wayne Gretzky's al (12/24/22): Ovechkin has been among the NHL's most lethal scorers every year for nearly two decades

This Wayne Gretzky Edmonton Oilers jersey just sold for a record $1.45M US (06/2022): An Edmonton Oilers jersey worn by hockey legend Wayne Gretzky sold at an auction Saturday for a record-breaking $1.45 million US. Gretzky wore the jersey during the Oilers' 1988 Stanley Cup Final win over the Boston Bruins, less than three months before No. 99 was traded to the Los Angeles Kings in

LOOK: Wayne Gretzky recreates hilarious Michael Scott meme from 'The Office' (05/2022): The Great One wants his quote back

Wayne Gretzky says Alex Ovechkin 'will' break his record for most career NHL goa (12/2021): The Great One tallied nearly 900 goals in his legendary NHL career

Does Alex Ovechkin actually have a shot at breaking Wayne Gretzky's all-time goa (11/2021): Ovechkin recently passed Brett Hull for the No. 4 spot on the all-time goals list

Can Alex Ovechkin still break Wayne Gretzky's goal-scoring record? (10/2021): Ovechkin is at 730 goals, with his sights set on Gretzky's record of 894. Teammates past and present, along with NHL stars and Hall of Famers, weigh in.

Longtime NHL vet 'Bugsy' Watson dies at 78 (07/2021): Former NHL defenseman Bryan "Bugsy" Watson, who played for Scotty Bowman and with Doug Harvey and coached Wayne Gretzky, has died. He was 78.

Wayne Gretzky mint condition rookie card sells for $3.75M, breaks record for mos (05/2021): It is the highest price ever paid for a hockey card

Gretzky's father, 'inspiration' for NHL great, dies (03/2021): Walter Gretzky, whom his son Wayne Gretzky credited as "the reason I fell in love with the game of hockey," has died at age 82.

NHL Viewers Club: 'Kings Ransom' (04/2020): We rewatch the Peter Berg-directed 30 for 30 documentary that explores when Wayne Gretzky got traded to L.A.

Alex Ovechkin scores 700th goal, but how serious is his pursuit of Wayne Gretzky (02/2020): The all-time goals record no longer seems unbreakable

Wayne Gretzky hopes that Alex Ovechkin breaks his goals record one day (01/2020): The Great One is willing to follow the Great Eight in the hopes of seeing his all-time goals record broken

Panthers score 5 straight goals to beat Ducks 5-4 in OT (11/2019): The Florida Panthers are showing a capacity for comebacks the NHL hasn’t seen since Wayne Gretzky’s prime. Aaron Ekblad scored his second goal of the game 22 seconds into overtime and the Panthers rallied with five straight goals to stun the Anaheim Ducks 5-4 Thursday night. Brett Connolly sparked

Oilers put perfect record on line at Blackhawks (10/2019): The Edmonton Oilers will try to continue their sizzling start when they visit the Chicago Blackhawks on Monday night. Edmonton (5-0-0) has opened the season with five straight victories for the first time since the 1985-86 campaign, when the roster included legends such as Wayne Gretzky, Paul Coffe

Is Stephen Poloz the Wayne Gretzky of Canada’s economy? (02/2019): Bank of Canada governor Stephen Poloz, known for employing quirky metaphors, appeared to borrow from the iconic fatherly advice given to the Great One to explain the difficulty of making policy decisions today for tomorrow’s economy.

Wayne Gretzky, Gordie Howe to appear in Saskatoon (12/2014): Gordie Howe is recovering well enough from recent health issues that he is expected to appear at a Saskatoon gala event this winter, his family says.

Wayne Gretzky knew Sens, Alfie would reunite (11/2014): Wayne Gretzky always predicted the Senators and Daniel Alfredsson would find their way back together.

Entertainment City: Wayne Gretzky to be a grandpa, ‘Black-ish’ preview (09/2014): Wayne Gretzky is about to become a grandfather, plus we preview Black-ish.

Father-in-Law Knows Best? Frustrated Wayne Gretzky Slams ‘Dumb’ Dustin Johnson A (08/2014): When Dustin Johnson dropped out of the PGA tour amid reports of rampant partying and drug use , there was one person who was probably not surprised. A PGA insider… READ ON

10 Interesting Facts About Wayne Gretzky (06/2014): Wayne Gretzky is considered to be the greatest hockey player of all time. Here are 10 interesting facts about him. Contributor: Tom Harrington Published: Jun 08, 2014

Wayne Gretzky sings Nathan MacKinnon's praises (04/2014): Not much different than sommeliers and their cabernets, when it comes to greatness, sports fans are connoisseurs on couches. But "greatness" in our games these days is casually labeled, so to identify the real thing, I went to The Great One himself.

It is not every day you see Wayne Gretzky-like vision and city bus driving exami (02/2014): They look like tiny white specks on a mottled grey background. They’re polar bears seen from space — using the newest tool in the kit for scientists to monitor Canada’s populations of the mighty Arctic predator. “They really do stand out as a bright...

Wayne Gretzky named on 'Most Athletic Americans' list (01/2014): “The Great One” was traded from the Edmonton Oilers to the Los Angeles Kings in 1988 — but who knew his nationality went with him.

Why opera directors need to think like Wayne Gretzky (12/2013): Rufus Wainwright to pen first opera in 19 years – but Canadian company could take a cue from Opera Philadelphia’s model of public engagement

Stick Wayne Gretzky Used at Age 13 Goes Up for Auction, Expects to Go for At Lea (07/2013): TORONTO — The hockey stick Wayne Gretzky used when he was 13 years old to score the 1,000th goal of his life will be put up for auction. The stick had belonged to Ron St. Amand, who was Gretzky’s coach in 1974. He died last year at age 73. Rather than decide which one of […]

Irish-born Winter Olympics CEO to pick Wayne Gretzky to light the flame? (06/2013): Irish-born John Furlong is keeper of the flame on the identity of the person who lights the Olympic flame in two weeks. Furlong, the Chief Executive Officer of the Vancouver Olympic Organizing Committee, is playing his cards close to his chest.

Report: Mark Messier, Wayne Gretzky interested in coaching Rangers (05/2013): The New York Rangers are a high-profile franchise in one of the biggest markets in hockey. With their head-coaching job vacant, it's no wonder that the franchise's -- and the sport's -- two biggest stars want to call the shots behind the bench.

Wayne Gretzky talks NHL playoffs (04/2013): The Great One joined Hockey Night In Canada Radio on Sirius XM on Monday to talk about what playoff teams and first-round matchups he's most looking forward to seeing in action.

Taylor Hall’s hat trick breaks an Oilers record set by Wayne Gretzky (03/2013): Scoring a hat trick in 7:53 is amazing no matter what.

Random Hockey Video of the Day: The Wayne Gretzky Fan Club (11/2012): The NHL lockout has been in effect for more than two months now, and so, with no actual games to report on, we're going to link to a different hockey video every day until a new CBA is reached. Today: the Great One sits down with David Letterman.

Wayne Gretzky was asked about many years ago if he thought anyone would be able (10/2012): This time around, Sid The Kid is paying his own compliments forward - to future NHL draft pick Conor McDavid. The world's best player watched highlights of the 15-year-old hockey prodigy playing with the nearby Erie Otters of the OHL recently and came away impressed.

Slap Shot: Wayne Gretzky and Krys Barch Offer Views on Lockout (09/2012): Krys Barch, an active journeyman, and Wayne Gretzky, the best player of all time, made provocative statements on the lockout.

NHL great Wayne Gretzky pops up in Seattle as outlook in Phoenix sours (07/2012): Wayne Gretzky had been in talks with officials from Bellevue, Wash., regarding NHL possibilities.

Wayne Gretzky among initial Order of Hockey in Canada honourees (06/2012): As he received yet another award honouring his career, Wayne Gretzky said he had no regrets about leaving hockey.

Wayne Gretzky’s dad has an impressive cache of Maple Leafs jokes (04/2012): Walter brings the zingers in an interview with the National Post.

Kings GM Lombardi on building winning culture: “They got Wayne Gretzky and that (03/2012): Deano takes the pulpit.

Relighting the fire within Day 14: Wayne Gretzky's stressful time at Olympics yi (02/2012): This is the 14th in a series of articles looking back on the 2002 Winter Games in conjunction with the event's 10-year...

Wayne Gretzky's Daughter Closes Racy Twitter Account (11/2011): Paulina Gretzky says she had a "sit down dinner" with her dad to discuss social media

Video: Is there a shot Wayne Gretzky can't make? (09/2011): The Great One shows off his trick hockey shots and then some in this video created by the comedy website CollegeHumor.

Marc Savard talks life-changing moments, Wayne Gretzky, jock itch (07/2011): Look into my eyes. You are getting very, very sleepy … . Getting paid to make people do ridiculous things is the life of a comedy hypnotist. When ...

He's on quite a roll but Sidney Crosby finds it hard to compare his point-scorin (12/2010): Crosby extended his streak to 24 games Sunday night with a goal in the Pittsburgh Penguins' 3-1 loss to the Ottawa Senators. That's the longest in the NHL since Mats Sundin recorded a point in 30 straight games for the Quebec Nordiques in 1992-'93.