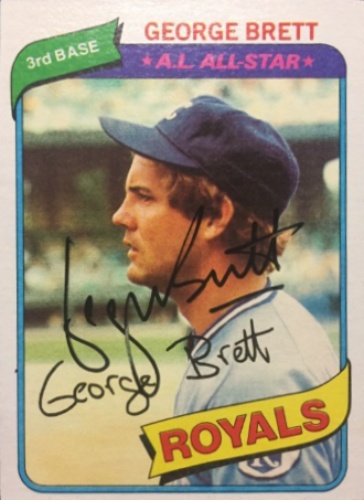 George Howard Brett (born May 15, 1953) is an American former professional baseball player who played all of his 21 seasons, as a third baseman, in Major League Baseball (MLB) for the Kansas City Royals. More about George Brett

Current items with a signature of George Brett

These are the most current items with a signature of George Brett that were listed on eBay and on other online stores - click here for more items.

Traded items with a signature of George Brett

If you're interested in George Brett Rookie cards you might want to take a look at our sister site that specializes in Baseball Rookie Cards only.

The most expensive item with a signature of George Brett (GEORGE BRETT GAME WORN SIGNED JERSEY 1987, KANSAS CITY ROYALS) was sold in March 2018 for $7250.00 while the cheapest item (George Brett : Last of a Breed by Steve Cameron (1993, Hardcover) AUTOGRAPHED) found a new owner for $0.01 in March 2019. The month with the most items sold (78) was March 2020 with an average selling price of $7.13 for an autographed item of George Brett. Sold items reached their highest average selling price in September 2018 with $395.50 and the month that saw the lowest prices with $7.13 was March 2020. In average, an autographed item from George Brett is worth $65.00.

Most recently, these items with a signature of George Brett were sold on eBay - click here for more items.

Brett, Carew, among holdovers on Hall committee (12/02/19): Hall of Famers George Brett, Rod Carew and Dennis Eckersley are among the holdovers on the Hall of Fame's 16-man modern era committee, with Eddie Murray and Ozzie Smith among the newcomers.

Royals legend George Brett sees similarities between this team and 1985 squad (10/2014): Is this the start of another long successful run by the Kansas City Royals?

George Brett stars in new Wayside Waifs video (05/2014): This is a side of George Brett you've probably never seen.

George Brett says Yankees' Michael Pineda should have asked Joe Girardi where to (04/2014): The Hall of Famer at the center of the most famous pine tar incident in MLB history spoke about Pineda's ejection.

George Brett went from Terry Park to Hall of Fame (03/2014): Forty years ago today, George Brett had no idea what was coming.

Hall of Famer George Brett to speak at Memphis Tigers baseball banquet (12/2013): The University of Memphis baseball team will kick off its 2014 season with a Hall of Fame touch.

Fan in George Brett tirade speaks out (11/2013): The man behind the camera of the viral video showing Royals’ George Brett lashing out has finally spoken up.

Royals’ 86 victories is best year outside the George Brett/Frank White era (09/2013): Did it feel like a top 10 season in Royals’ history? It was. Their 86-76 record ranks 10th best for victories in the franchise’s 45-year history. This year’s Royals also produced the most victories from a team that wasn’t part of the franchise’s glory era of the 1970s and 1980s.

In 1973, George Brett arrived at a championship clubhouse in the making (07/2013): Little did 20-year-old George Brett know that the Royals clubhouse he walked into for the first time in 1973 was the most skillfully crafted team in Major League Baseball’s 1969 expansion class.

Hall of Famer George Brett finds improving Royals’ hitting easier said than done (06/2013): George Brett likes to say that hitting was always easier for him to do than say

MLB: George Brett says ‘It’s time for me to go to work’ (05/2013): ST. LOUIS — It was as if Hollywood had transported another comic book action scene to the big screen Thursday night when George Brett, clad again in his familiar No. 5 Royals uniform, strolled onto the field at Busch Stadium.

George Brett up for 'Hottie' award (09/2012): Royals legend George Brett may soon have another accolade to add to his list of achievements -- member of the 2012 Baseball Hotties Hall of Fame.

Alex Gordon is hitting like George Brett right now (07/2012): Alex Gordon had to live with the George Brett comparisons for a long time. He was a left-handed batting third baseman with a whip-quick swing and a brother named Brett.… [ Read more ] [ Subscribe to the comments on this story ]

George Brett talks camp, Opening Day (04/2012): George Brett joined us Friday to talk about a special summer camp he's involved with and also weighed in on Opening Day at the K.

George Brett likes Kansas City Royals' chances this year (03/2012): Hall of Famer Geroge Brett says the young club has what it takes to make some noise in 2012.

Gonzales commentary: Signing Starling could be Royals' biggest move since George (06/2011): There were two debuts I was paying attention to on Friday night. Locally, I was anxious to see Hays Larks left-hander Kirk Jewasko pitch. Nationally, I wanted to see the major league debut of Kansas City Royals third baseman Mike Moustakas.