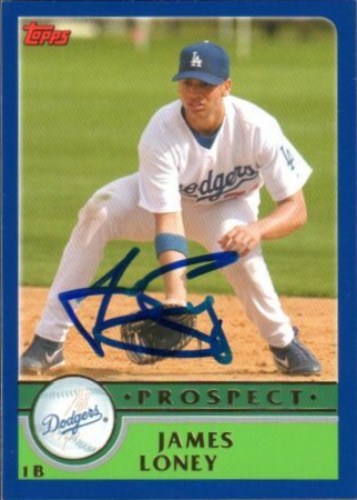 Current items with a signature of James Loney

These are the most current items with a signature of James Loney that were listed on eBay and on other online stores - click here for more items.

Traded items with a signature of James Loney

If you're interested in James Loney Rookie cards you might want to take a look at our sister site that specializes in Baseball Rookie Cards only.

The most expensive item with a signature of James Loney (2006 James Loney Chrome Autographed Blue Refractor Card) was sold in March 2008 for $152.50 while the cheapest item (JAMES LONEY AUTOGRAPHED 8X10 PICTURE DODGERS) found a new owner for $0.01 in August 2010. The month with the most items sold (42) was October 2008 with an average selling price of $18.17 for an autographed item of James Loney. Sold items reached their highest average selling price in June 2018 with $45.00 and the month that saw the lowest prices with $0.69 was June 2015. In average, an autographed item from James Loney is worth $10.55.

Most recently, these items with a signature of James Loney were sold on eBay - click here for more items.

The High-Five of Tampa Bay First Basemen: No. 5, James Loney (02/05/19): In the last 21 years, nine players have regularly called first base their home for the Tampa Bay Rays (and Devil Rays). When compared to the ballclub’s m...

James Loney the hero again in Rays 1-0 win over Royals (04/2014): James Loney hit an RBI single with two outs in the ninth inning to lift the Tampa Bay Rays over the

Ray agree to three-year deal with James Loney (12/2013): The Tampa Bay Rays came to terms with first baseman James Loney on a three-year, $21 million contract Friday. A year ago, Loney was coming off a brutal 2012 season and a free agent for the first time.

Rays interested in re-signing James Loney, Fernando Rodney (10/2013): Loading... "I think it's safe to say we're not going to have a lot of headroom from a payroll perspective. That being said, we've always been very creative in terms of how we put together the best 25-man roster we can.

The return of James Loney, hitting .307, to Dodger Stadium (08/2013): Rays first baseman James Loney connects for a three-run home run in the seventh inning of a game against the Yankees in New York last month. ( Jim McIsaac / Getty Images / July 26 , 2013 )

Rays James Loney on paternity list (07/2013): James Loney has a new addition to his family. The Tampa Bay Rays first baseman and his wife, Nadia, welcomed son Jordan James on Thursday night, the team announced Friday. The child weighed 8 pounds, 2 ounces and is the couple's first.

Soul survivor: Music is James Loney 's drug of choice (04/2013): James Loney is a car salesman who sings for his supper at night. It’s a good life — especially considering what could’ve been.

Daily Dodger in Review: Now James Loney is someone else's mystery (11/2012): With the Dodgers, first baseman James Loney seemed to be constantly tinkering with his swing, which pretty much everyone but him found maddening. ( Chris Carlson / Associated Press / April 29 , 2012 )

Same ol' James Loney in Boston, which may want him back anyway (10/2012): Are you missing James Loney? Come on, not even a tiny bit?

James Loney unsettles in (09/2012): The last three weeks have been a whirlwind for James Loney. The first baseman has been living out of a suitcase...

James Loney helps Red Sox beat Royals, 8-6 (08/2012): BOSTON -- With a well-placed ground ball up the middle, James Loney showed he can fit in at Fenway Park -- just like Chavez Ravine.

Dodgers lost at the corners: James Loney and Juan Uribe (06/2012): There are messages in a bottle, and then there are those in the lineup card.

Dodgers' James Loney finds his hitting stroke again (04/2012): Loney, who was hitless in his first 16 at-bats, has 10 hits in his last 30 at-bats to raise his average to .217. HOUSTON — The recurring ups and downs of James Loney at the plate are on the upswing again.

Stats, History Say James Loney Has a Chance to be the 2012 Home Run Champ (03/2012): File this away for upcoming fantasy baseball drafts.

Dodgers Avoid Arbitration With James Loney (01/2012): The Dodgers avoided arbitration with first baseman James Loney on a deal worth $6.375MM plus performance bonuses, according to his agency CAA. Clayton Kershaw is the team's lone remaining arbitration eligible player.

2011 MLB Trade Rumors – James Loney to Chicago Cubs? (11/2011): MLB teams will make several moves this off-season to off-set the loss of free agents or to fill holes on their roster from under-achieving players. The Chicago Cubs have a huge hole at first base and . . .

Magic number for James Loney to depart Dodgers is 42 (08/2011): Underachieving first baseman is as good as gone from the team, and wouldn't it be nice to replace him with Prince Fielder? Arizona's magic number to eliminate the Dodgers from National League West contention is 30.