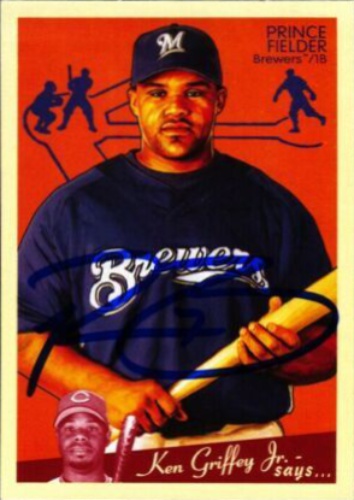 Prince Semien Fielder (born May 9, 1984) is an American former professional baseball first baseman and designated hitter, who played in Major League Baseball (MLB) for the Milwaukee Brewers, Detroit Tigers, and Texas Rangers. He was selected in the first round of the 2002 Major League Baseball draft by the Brewers out of Eau Gallie High School in Melbourne, Florida, and spent the first seven years of his MLB career with the Brewers before signing with the Tigers, in January 2012. In November 2013, Fielder was traded to the Rangers, where he played the remainder of his career. More about Prince Fielder

Current items with a signature of Prince Fielder

These are the most current items with a signature of Prince Fielder that were listed on eBay and on other online stores - click here for more items.

Traded items with a signature of Prince Fielder

Most recently, these items with a signature of Prince Fielder were sold on eBay - click here for more items.

VIDEO: This Clip of MLB Star Prince Fielder Washing a Tiny Pig is Legendary (02/08/19): ​It's Friday, so why not get your weekend started off on the right foot by watching former MLB All-Star Prince Fielder wash a tiny pig? Fielder took to his...

Prince Fielder posts video of himself washing screaming piglet in shower (02/08/19): Former All-Star infielder Prince Fielder is preparing for the 2019 baseball season a little bit differently than most: by washing a piglet in his shower.

Hunter Pence Q&A: Outfielder shares changes, openness to rejoining Giants (12/05/18): Hunter Pence isn't done yet. Teams have been reaching out to the three-time All-Star, who's headed to the Dominican Republic for winter ball.

Hunter Pence Q&A: Outfielder shares changes, openness to rejoining Giants (12/2018): Hunter Pence isn't done yet. Teams have been reaching out to the three-time All-Star, who's headed to the Dominican Republic for winter ball.

Prince Fielder Does Squats With Teammate On His Shoulders [VIDEO] (04/2015): Whether or not you are a Prince Fielder fan, you have to admit it's pretty impressive.

Did Joba Go All Prince Fielder? [VIDEO] (10/2014): Remember Fielder’s comments about his kids that angered the fan base? Yeah, Joba went down a similar path.

Prince Fielder begins rehab (07/2014): Prince Fielder is focused on healing after neck surgery and not worried about when he will play again for the Texas Rangers.

News quiz: Eric Ebron, Prince Fielder naked and more (06/2014): Test your knowledge of current sports events of the past week:

Nats Journal: Revisting the Nationals’ pursuit of Prince Fielder (05/2014): The Nats pursued Prince Fielder three years ago, and already it appears they made the right call to back away.

Why Did The Detroit Tigers Really Trade Prince Fielder? (04/2014): Prince Fielder signed a 9-year, $214 million dollar contract with the Detroit Tigers before the 2012 season. He played for the Tigers for two before being traded. It was a rough year for Fielder in 2013, both on and off the field. He hit.279 with 30 home runs and 106 RBIs, his worst year since

Tigers will feel the losses of Prince Fielder, Jhonny Peralta, Omar Infante (03/2014): Dig the long ball? Your time at Comerica Park might not be as enjoyable this year. A Tigers club built after Earl Weaver's heart — 'pitching and three-run homers' — now has a vastly different look, and power's not really part of it.

Yu Darvish strikes out 4, Prince Fielder homers in Rangers' win over Royals (02/2014): Last year, the Rangers struggled to score runs behind Yu Darvish, who was the first pitcher since 1989 to have four 1-0 losses in the same season. Read more

Report: Ian Kinsler declined trade to Blue Jays before being dealt to Tigers for (01/2014): Had Kinsler agreed to go to the Blue Jays deal certainly opens a can of what-ifs for the Tigers, who traded first baseman Prince Fielder and $30 million to the Rangers in exchange for the all-star second baseman.

Hunter Expects ‘Great Things’ From Former Teammate Prince Fielder (12/2013): Prince Fielder has never been named MVP, but that doesn't mean he's not among the game's best hitters, according to former teammate Torii Hunter.

Caption This winners: Prince Fielder, Texas Ranger (11/2013): This photo of former Tiger slugger Prince Fielder and his sons being introudced to the Texas news media drew 176 caption ideas. You can read the runners-up at ABetterMichigan.com. Come back Wednesday for another opportunity to play Caption This.

Motor City Bengals: Prince Fielder's contract, attitude could be albatross for D (10/2013): Matt Pelc is a writer for the Detroit Tigers blog Motor City Bengals . His opinions do not necessarily reflect those of the Detroit Free Press nor its writers. Read his columns here most Tuesdays.

Prince Fielder shares moment with father (09/2013): Former Detroit Tigers slugger Cecil Fielder attended Friday night’s game between the Tigers and Marlins in Miami and shook hands with his son, Prince, next to the dugout before the game.

Prince Fielder Doppelganger Enjoyed Tigers Sweeping the Mets at Citi Field This (08/2013): And we will call him … mini Prince?

Tiger Stadium roof? Third deck? Lumber yard? Where would Prince Fielder's homer (06/2013): Where would it have finished at Tiger Stadium? That was the question of the day about Fielder's mammoth home run to right at Tropicana Field on Friday night.

Prince Fielder clubs another towering homer in Tigers' loss to Braves (02/2013): Fielder hit his second mammoth home run in five games, a sky-scraping blast that appeared to have eclipsed the right-field light tower's upper altitudes at Marchant Stadium, which was the Tigers' big moment in a 5-3 loss to the Braves.

Nick Swisher and Prince Fielder , Compared (11/2012): Prince Fielder casts a large shadow, both physically and figuratively, as even a year removed from his signing with Detroit, his name still continues to be linked to discussions of what the Mariners might do or should have done in the past. Ever since ...

Blame for Detroit Tigers' World Series loss falls on Justin Verlander, Prince Fi (10/2012): I feel for the millions of Detroit Tigers fans in this state. All of you deserved a World Series championship celebration for the time, money, and effort you put into following the team this year. If you’re like me, the season and World Series were emotionally exhausting.

Tigers' Prince Fielder quietly putting up huge numbers (09/2012): He's been overshadowed, but hasn't minded. With most of the attention going to Miguel Cabrera this season for what he's done at the plate, Prince Fielder hasn't bristled or felt left out.

Detroit Tigers lineup: Justin Verlander back on mound; Prince Fielder has excell (07/2012): Fielder has four career hits -- three of them home runs -- in eight at-bats against right-hander Josh Beckett, who will start tonight for the Boston Red Sox.

Prince Fielder on Mariners: It wasn't that serious (04/2012): Tigers slugger Prince Fielder said Seattle wasn't in the running at the end of offseason bidding.

Detroit Tigers' Prince Fielder makes being a hero to his two sons a priority (03/2012): Prince Fielder isn't concerned about his relationship with his father, he's focused on being a great dad.

Detroit Tigers' Jim Leyland calls Prince Fielder signing 'the most unbelievable (02/2012): In an interview with Baseball Tonight, Leyland discusses the shock of the Fielder acquisition, how he's always been a "hyper" coach, and why he never wanted to be a manager.

Prince Fielder's megabucks contract: Is sports the new showbiz? (01/2012): Why do we live in a time when sports salaries are such a hot topic, but hardly anyone cares anymore what movie stars make?

Mariners make Prince Fielder an offer (12/2011): The report by baseball blogger Jon Heyman indicates the Mariners have told the free agent slugger what they'd be willing to pay, but that they won't break the bank to get him.

Major League Baseball: Mariners' GM Zduriencik mum on courting Prince Fielder (11/2011): Jack Zduriencik knew the questions would be coming about his long relationship with slugger Prince Fielder and the synergy of Fielder being a free agent and the Seattle Mariners needing an influx of power.

Did Prince Fielder just play his final home game with the Brewers? (10/2011): There’s still plenty of baseball left to be played, so we might be getting a little bit ahead of ourselves here, but Monday’s win by the Cardinals at least makes it possible that Prince Fielder has played his final game at Miller Park as a member of the Brewers. With the series now tied 1-1,…

Should Mariners go after slugger Prince Fielder? (04/2011): It's just May 1, but already the buzz is starting to build about Prince Fielder's impending free agency, when he'll be the premier offensive player available not named Albert Pujols.

Defying the odds, Prince Fielder remains a Brewer (02/2011): During the Milwaukee Brewers' final home game last season, first baseman Prince Fielder made an early exit, walking off the diamond with a tip of the cap to a standing ovation.