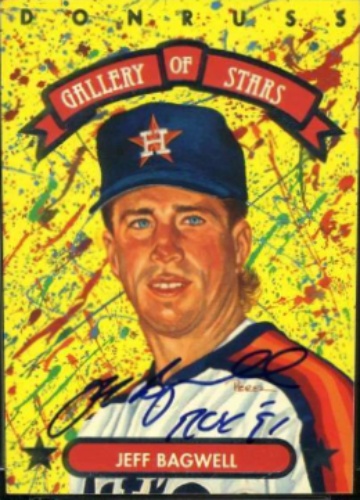 Current items with a signature of Jeff Bagwell

These are the most current items with a signature of Jeff Bagwell that were listed on eBay and on other online stores - click here for more items.

Traded items with a signature of Jeff Bagwell

If you're interested in Jeff Bagwell Rookie cards you might want to take a look at our sister site that specializes in Baseball Rookie Cards only.

The most expensive item with a signature of Jeff Bagwell (Jeff Bagwell Signed Game Used 1994 All Star Game Bat From Kirby Puckett PSA DNA) was sold in January 2021 for $2995.00 while the cheapest item (JEFF BAGWELL 96 UPPER DECK HOBBY PREDICTOR SIGNED CARD) found a new owner for $0.01 in September 2008. The month with the most items sold (45) was March 2008 with an average selling price of $2.00 for an autographed item of Jeff Bagwell. Sold items reached their highest average selling price in July 2018 with $399.99 and the month that saw the lowest prices with $1.04 was March 2013. In average, an autographed item from Jeff Bagwell is worth $30.00.

Most recently, these items with a signature of Jeff Bagwell were sold on eBay - click here for more items.

Jeff Bagwell, Astros legend and Baseball Hall of Famer, calls 'Moneyball' a 'far (05/26/22): The Hall of Famer didn't hide his feelings regarding the early 2000s Athletics

Jeff Bagwell Is Committed to Housing the Area's Families (04/11/15): It's been 25 years since Jeff Bagwell signed on as Polk County's unofficial gatekeeper of the American Dream.

Exclusive: Jeff Bagwell remembers career, talks future with Astros (03/09/15): Just days before some of this year's pitchers and catchers report for Astros Spring Training, Eyewitness News Anchor Dave Ward sat down with a former Astros great to talk about his new role with his old team

Jeff Bagwell is rejoining the Astros organization, at least temporarily (01/2015): He hasn't worked with the Astros since 2010.

Jeff Bagwell stunned, devastated Craig Biggio did not make Hall of Fame (01/2014): Former Houston Astros first baseman Jeff Bagwell is furious that his former teammate, Craig Biggio, did not get into the National Baseball Hall of Fame this year.It takes 75 percent of the vote of the

Jeff Bagwell at the center of sleazy divorce case of Rachel and Michael Brown (01/2013): Former Astros slugger Jeff Bagwell was passed over for the Hall of Fame along with Barry Bonds, Roger Clemens and Mark McGwire this month, but...

Jeff Bagwell passed over for Hall of Fame (01/2012): Barry Larkin has been elected to baseball's Hall of Fame

Ken Rosenthal’s eminently reasonable position on Jeff Bagwell and steroids (12/2011): Not sure why it’s so hard for Hall of Fame voters to get on board with the ideas that (a) it’s not fair to assume someone was on steroids when there is no evidence of it; and (b) Jeff Bagwell, on the merits, posted a Hall of Fame career. But considering it’s highly unlikely he’ll…

Spring Training Memory, 1991: The 449 home runs that the Red Sox traded away (03/2011): WINTER HAVEN, Fla., 1991 – It’s early March, and the Red Sox have a home exhibition game with the Houston Astros. Look who’s playing first base for them – Jeff Bagwell . It’s a new position for him. He generally played third when he was a Red Sox farmhand.