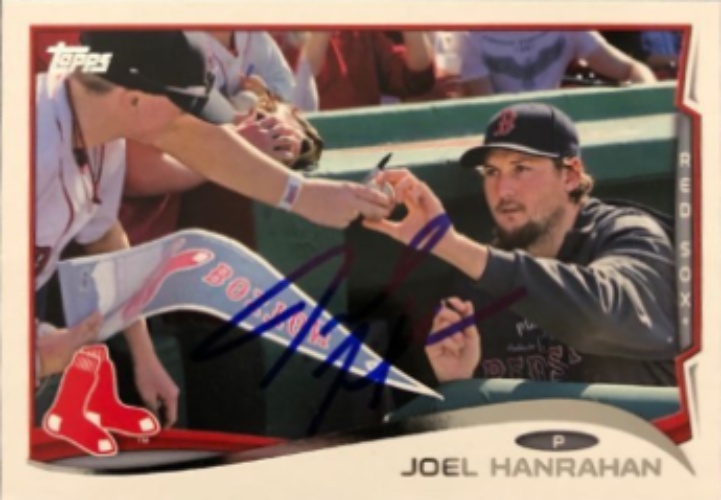 Current items with a signature of Joel Hanrahan

These are the most current items with a signature of Joel Hanrahan that were listed on eBay and on other online stores - click here for more items.

Traded items with a signature of Joel Hanrahan

The most expensive item with a signature of Joel Hanrahan (Autographed Joel Hanrahan Pittsburgh Pirates Jersey) was sold in July 2011 for $160.00 while the cheapest item (JOEL HANRAHAN AUTO SIGNED OL BASEBALL NATIONALS PIRATES) found a new owner for $0.11 in October 2010. The month with the most items sold (20) was July 2011 with an average selling price of $13.00 for an autographed item of Joel Hanrahan. Sold items reached their highest average selling price in October 2011 with $120.00 and the month that saw the lowest prices with $0.11 was October 2010. In average, an autographed item from Joel Hanrahan is worth $7.99.

Most recently, these items with a signature of Joel Hanrahan were sold on eBay - click here for more items.

Joel Hanrahan's promotion to Altoona highlights Pirates '19 minor-league coachin (01/18/19): The Pittsburgh Pirates announced their minor-league managerial and coaching assignments Friday, and the most familiar name to casual fans will be the pitching coach at Double-A Altoona. Popular former Pirates closer Joel Hanrahan was bumped from the Pirates' Class Low-A affiliate to serve as the pit

Joel Hanrahan still has soreness in his arm (03/08/15): It's been over two years since Hanrahan was healthy and effective.

Elbow injury is more bad news for Joel Hanrahan, Tigers' bullpen (03/04/15): A second bout of Tommy John surgery will cost Joel Hanrahan the 2015 season and rob the Tigers of a possible reinforcement for their shaky bullpen.

Joel Hanrahan's latest bullpen session appears to be another bump in long rehabi (02/2015): Hanrahan threw a bullpen session Saturday morning along with 13 of his teammates. It clearly didn't go as well as he and the Tigers hoped.

Detroit Tigers leave Joel Hanrahan exposed to Rule 5 draft, are not likely to lo (11/2014): When the Tigers signed Hanrahan to a minor-league deal, it came with basically zero risk to the team. But any team that selected him in the Rule 5 draft would not have that same benefit.

'Highly unlikely' Joel Hanrahan will pitch for Tigers this season (07/2014): He had Tommy John surgery last year, and seemed well on his way to a comeback when the Tigers signed him in May — beating out several other interested clubs in the process.

Major League Baseball player Joel Hanrahan visits with columnist Bryce Miller (12/2013): A link to this page will be included in your message. See our paid archives for news older than a week.

Joel Hanrahan makes sense for Yankees (11/2013): ORLANDO, Fla. — Joel Hanrahan, who missed all but nine games for the Red Sox last season due to a torn muscle near his elbow, is long-tossing now and about...

Joel Hanrahan may be out of luck (04/2013): Imagine having a rough week at work, catching the flu, calling in sick for three days, and then returning to discover you’ve been demoted. In corporate America, you might have grounds for a lawsuit. In baseball, you suck it up and pitch the eighth inning.

Joel Hanrahan contributes to NL's All-Star Game victory (07/2012): The only thing missing on a classic summer night at Kauffman Stadium was a little suspense.