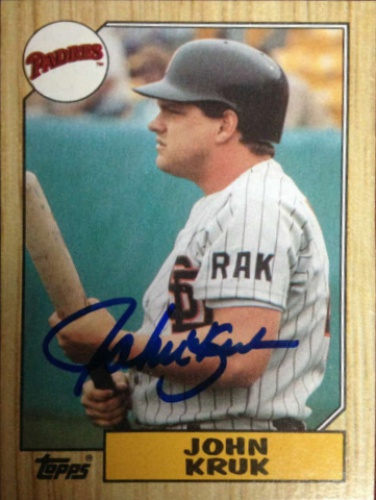 John Martin Kruk (born February 9, 1961) is an American former professional baseball first baseman and outfielder. Kruk played in Major League Baseball (MLB) for the San Diego Padres, Philadelphia Phillies, and Chicago White Sox from 1986 through 1995. During his career, he was a three-time MLB All-Star. After retiring as a player, Kruk became a baseball analyst for ESPN. He is now a color commentator for Phillies' games on NBC Sports Philadelphia. More about John Kruk

Current items with a signature of John Kruk

These are the most current items with a signature of John Kruk that were listed on eBay and on other online stores - click here for more items.

Traded items with a signature of John Kruk

If you're interested in John Kruk Rookie cards you might want to take a look at our sister site that specializes in Baseball Rookie Cards only.

The most expensive item with a signature of John Kruk (Game Used/Worn 1989 Phillies John Kruk Jersey Signed) was sold in November 2015 for $315.00 while the cheapest item (John Kruk Signed Baseball Card) found a new owner for $0.01 in July 2014. The month with the most items sold (36) was August 2021 with an average selling price of $16.30 for an autographed item of John Kruk. Sold items reached their highest average selling price in August 2016 with $59.99 and the month that saw the lowest prices with $1.04 was September 2009. In average, an autographed item from John Kruk is worth $9.99.

Most recently, these items with a signature of John Kruk were sold on eBay - click here for more items.

John Kruk on Bryce Harper: 'I Don't Think Anyone Is Worth $300 Million' (02/26/19): Free agent outfielder Bryce Harper is rumored to be looking for a contract worth more than $300 million. But according to former Phillies All-Star and current baseball analyst John Kruk, no player is worth that much money.

Ex-Phillie John Kruk offers take on Boston Red Sox pitcher and N.J. native Rick (04/01/15): What did Kruk have to say about Porcello?

ESPN's Dan Shulman and John Kruk to call Sunday night's Boston Red Sox-New York (07/30/14): Congratulations! Your weather is set to . You can change the location at any time. Don't have an account?

ESPN's Dan Shulman, John Kruk to Call "Sunday Night Baseball" atop Green Monster (07/30/14): The duo will be joined by ESPN MLB Insider Buster Olney who will provide reports from the field.

Chris Berman And John Kruk Caught on Hot Mic During Stand Up to Cancer Moment (07/14/14): Not a great look.

John Kruk, professional hitter (08/2013): It's hard to believe now, but when John Kruk first reached the major leagues in 1986 he was beardless and, if not skinny, svelte compared to his later playing days.

Won't Someone At ESPN Get John Kruk A Towel? (07/2013): Goodness. Either that or turn up the AC. And maybe get him a new shirt. Thanks. And please hurry. I know this happened this morning, but still. No one wants to see the Krukker drown to death in his flopsweat. Read more...

Zoo With Roy: A cat that looks like John Kruk ? (03/2013): Our favorite penguin Zoo With Roy received a picture sent to the bolg of a fan's grumpy-looking cat, named "Dozer," wearing a Phillies sundae helmet. The fan claims that the cat is actually former Phillies catcher John Kruk . Here is the original photo:

Phillies Wall Of Fame Honoree John Kruk On Hand For Legends Luncheon (08/2011): The Phillies held their annual Legends Luncheon today ahead of alumni weekend. As part of the festivities, former first baseman John Kruk will be inducted into the Wall of Fame.

John Kruk: Wall of Famer (06/2011): The former first baseman will be inducted this summer.