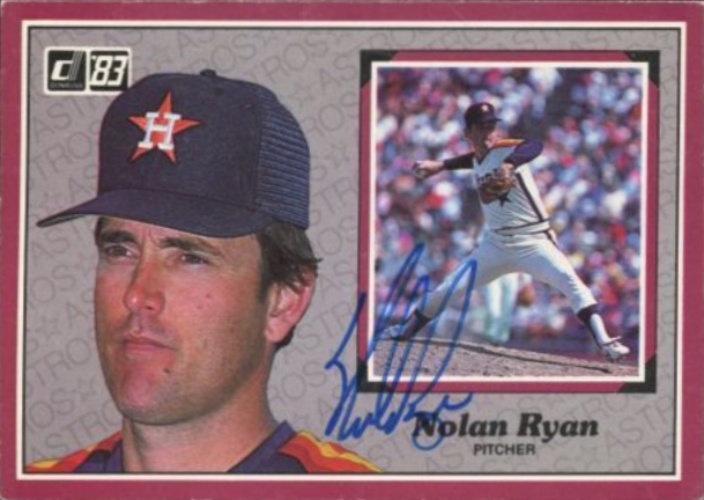 Lynn Nolan Ryan Jr. (born January 31, 1947), nicknamed "the Ryan Express", is an American former professional baseball pitcher and sports executive. Over a record 27-year playing career in Major League Baseball (MLB) spanning four decades, Ryan pitched for the New York Mets, California Angels, Houston Astros, and Texas Rangers. After his retirement in 1993, Ryan served as chief executive officer (CEO) of the Texas Rangers and an executive advisor to the Houston Astros. He was inducted into the Baseball Hall of Fame in 1999, and is widely considered to be one of the best MLB pitchers of all time. More about Nolan Ryan

Current items with a signature of Nolan Ryan

These are the most current items with a signature of Nolan Ryan that were listed on eBay and on other online stores - click here for more items.

Traded items with a signature of Nolan Ryan

If you're interested in Nolan Ryan Rookie cards you might want to take a look at our sister site that specializes in Baseball Rookie Cards only.

Most recently, these items with a signature of Nolan Ryan were sold on eBay - click here for more items.

Nolan Ryan Had a Softer Side. He Just Hid It (Very) Well. (07/21/22): A new documentary explores the unique challenge of facing Ryan, the game’s most prolific strikeout artist, but also shows off a gentler version of the Ryan Express.

Nolan Ryan threw hard -- in his prime and in his 60s (04/14/20): One time, Ryan struck out the first batter of the game on three pitches. Ralph Garr walked back to the dugout and told his teammates, "This game is over."

Astros, Nolan Ryan part ways (11/07/19): The Astros and Hall of Fame pitcher Nolan Ryan have parted ways. Ryan had been an executive advisor in the front office. His son Reid was also effectively demoted.

Pedro Martinez: Nolan Ryan, Bret Saberhagen Were My Heroes Growing Up (01/2015): Pedro Martinez is a hero to many, but even the Boston Red Sox great has...

Nolan Ryan endorses proposed Fort Worth arena (10/2014): Fort Worth residents have until Nov. 4 to vote on funding options for the proposed 14,000-seat arena for the Cultural District.

Musicians + Sports: Chase Bryant On Nolan Ryan And Texas Baseball (09/2014): The "Take It on Back" singer does just that as he reminisces about the glory days of the Houston Astros and watching the legendary Baseball Hall of Fame pitcher Nolan Ryan hurl when he was a kid.

Kershaw's gem was great, but batters feared Nolan Ryan (06/2014): Ron Rapoport: Was Clayton Kershaw's no-hitter more impressive than Nolan Ryan's 17-strikeout gem for the Angels in 1973? Ron Rapoport, who covered that game for the LA Times, considers the question.

Baseball's legendary Nolan Ryan talks ranch life, Little League memories and his (05/2014): This month, the pitcher releases: The Nolan Ryan Beef & Barbecue Cookbook, recipes that tell stories about his other passion: his second life as a cattleman.

Nolan Ryan's great-niece Dana Hendry of Rutgers softball has game in her blood (04/2014): PISCATAWAY — During her annual summer visits to Texas to visit her great-uncle Nolan, Dana Hendry has watched fireworks from the field after a Texas Rangers game and played Wiffle ball with her extended family inside a minor-league ballpark, but she hasn’t yet sought advice on calling pitches.

Could Nolan Ryan Move Quickly From Consultant To President/GM Of The Houston Ast (01/2014): Hall of Famer Nolan Ryan has met with the Houston Astros about a yet determined position. Could this simply be the first in a larger plan?

Nolan Ryan rumored to be considering run for agriculture commissioner (11/2013): Try The Dallas Morning News premium site free for 4 weeks! Sign up with your email address and start using our newly designed experience optimized for tablet and desktop.

Mark Cuban Made More Money From Texas Rangers Than Nolan Ryan (10/2013): Mark Cuban is so smart that he even wins when he loses.

Nolan Ryan honored for more than pitching (09/2013): Hall of Famer, Texas Rangers exec built baseball team’s greatness on and off the field.

Reid, Nolan Ryan coming to a grill near you (07/2013): Fans in Houston could soon get the chance to see Astros president of business operations Reid Ryan dueling with his father, Nolan Ryan, over a hot grill.

Nolan Ryan not worried about losing Nelson Cruz (06/2013): Cruz's name was linked to the ongoing investigation in a report on ESPN's "Outside the Lines."

Yu Darvish modest over Nolan Ryan's Verlander comparison: 'Justin Verlander is t (05/2013): Yu Darvish is flattered by the praise but hardly thinks he is worth it.

Nolan Ryan : No time frame to decide future with Rangers (03/2013): The club CEO will be with the Rangers for the season and home openers, sources say.

Nolan Ryan to Speak at Banquet (01/2013): Albany will soon be host to one of the most famous names in Major League Baseball.

Nolan Ryan to Release Beef Cookbook With Some of Fiery Ace’s Favorite Recipes (11/2012): The first thing most baseball fans want from Hall of Famer Nolan Ryan is pitching advice. A close second may be recipes on the best ways to cook beef, of which Ryan is reportedly a master. Salivating baseball fans will get their wish in 2014, as Ryan is set to release a cookbook with his [...]

Nolan Ryan, sons eye Ottawa baseball stake (10/2012): Ottawa’s new professional baseball team could have a legendary Hall of Fame pitcher as one of its owners.

Nolan Ryan comments on Roger Clemens’ potential comeback (08/2012): If Roger Clemens does return to the majors this season, most people believe the Astros will be the team that employs the 50-year-old pitcher.

Josh Hamilton has no problem with Nolan Ryan's comments (07/2012): Rangers slugger Josh Hamilton is hitting just .199 in 156 at-bats over 42 games since the start of June, but he still has a .290 batting average this season.

Nolan Ryan Is Heading To Irving (06/2012): Nolan Ryan to speak at Forum Luncheon The Greater Irving-Las Colinas Chamber of Commerce is pleased ...

Best of West: Another Nolan Ryan no-hitter (02/2012): PORT ARTHUR — EDITOR’S NOTE: The following column from the Best of West Collection was originally published in the Port Arthur News on May 3, 1991.

21 Best Rangers Ever: Nolan Ryan (09/2011): Arguably the key moment in the history of the Texas Rangers happened on December 7, 1988. That was the day that Nolan Ryan signed a free agent deal with the Texas Rangers, setting the beleaguered franchise on a course that's still taking shape.

Texas Rangers president Nolan Ryan pitches wildfire prevention in Forest Service (07/2011): The ad features Ryan, a hall of fame pitcher, beaning a man about to start a campfire despite hearing burn-ban warnings on the radio.

Verlander speaks about injured vets, baseball and Nolan Ryan (05/2011): When he was a kid, he chucked a rock across an entire pond right after his father threw a similar sized rock only about halfway across. From about that time on, he has been a pitcher with an arm and velocity like few others.

Nolan Ryan Sets the Bar Nice and High (03/2011): You can't afford to disappoint the owner.