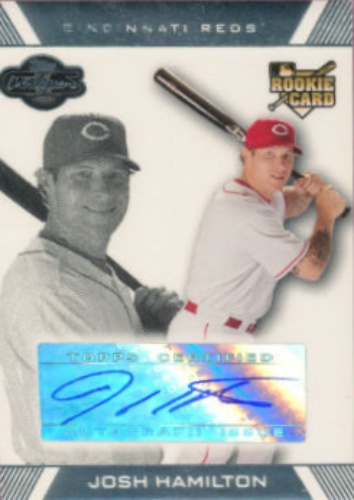 Current items with a signature of Josh Hamilton

These are the most current items with a signature of Josh Hamilton that were listed on eBay and on other online stores - click here for more items.

Traded items with a signature of Josh Hamilton

If you're interested in Josh Hamilton Rookie cards you might want to take a look at our sister site that specializes in Baseball Rookie Cards only.

The most expensive item with a signature of Josh Hamilton (JOSH HAMILTON GAME WORN SIGNED THROWBACK UNIFORM MAY 12 RANGERS VS. ANGELS) was sold in May 2012 for $6600.00 while the cheapest item (Josh Hamilton Texas Rangers signed autographed 2010 Topps baseball card COA) found a new owner for $0.75 in January 2020. The month with the most items sold (127) was July 2008 with an average selling price of $61.00 for an autographed item of Josh Hamilton. Sold items reached their highest average selling price in November 2018 with $209.99 and the month that saw the lowest prices with $3.62 was October 2016. In average, an autographed item from Josh Hamilton is worth $49.00.

Most recently, these items with a signature of Josh Hamilton were sold on eBay - click here for more items.

Josh Hamilton, Former M.L.B. Star, Charged With Injuring His Daughter (10/2019): According to a police affidavit, Hamilton’s teenage daughter told the police that he went on a rampage on Sept. 30. `

Have you heard about the time Rangers GM Jon Daniels nearly got choked out by Ki (12/2018): It is time for the winter meetings, when Rangers general manager Jon Daniels must grapple with trade and free agency decisions, be willing to butt...

Josh Hamilton's suspension depends on how many violations in his past (02/2015): Gven the past and present complexities â in Hamilton's case and Major League Baseball drug agreements â it's easy to understand why commissioner Rob Manfred is considering such a broad range of penalties.

Josh Hamilton needs to have a bounce-back season for Angels (12/2014): Two years into a five-year, $125-million deal with the Angels, outfielder Josh Hamilton, who won the 2010 American League most-valuable-player award with the Texas Rangers, is looking like a major bust.

STAGE PORTRAIT: Cynthia Nixon, Josh Hamilton, Maggie Gyllenhaal and Ewan McGrego (10/2014): His work has illustrated major ad campaigns for American Express, Showtime and Belvedere Vodka. Most recently, he was nominated for a 2010 Emmy for his animated commercial for CNBC.

Jack Reynor top pick to play Angels’ Josh Hamilton in Casey Affleck directed bio (06/2014): It has been nearly two years since there has been any news on the planned biopic of MLB slugger Josh Hamilton, but finally, there is some news on who might play him. read more

Angels' Josh Hamilton might not bat cleanup vs. left-handers (03/2014): Angels outfielder Josh Hamilton may find himself in the middle of the lineup against lefties this season. ( Ross D. Franklin / Associated Press / March 20 , 2014 )

Josh Hamilton On Crutches With Strained Calf (02/2014): Los Angeles Angels outfielder Josh Hamilton will be sidelined for at least two weeks because of a strained calf muscle, and pitcher C.J. Wilson does not appear to be seriously hurt after getting struck on the head by a line drive in batting practice.

Josh Hamilton returns to Louisville, tells his story of resiliency (01/2014): Josh Hamilton's road to redemption went through Louisville. He returned to town as the featured guest Friday night for the annual University of Louisville Baseball Leadoff Dinner.

Josh Hamilton goes 0 for 3 in spring debut (02/2013): Angels wouldn't mind seeing fewer strikeouts from the aggressive slugger, but Hamilton's style has been pretty successful. TEMPE, Ariz. — Josh Hamilton swung at the first pitch he saw as an Angel, and all of Texas appeared to snicker on Twitter: That's Hamilton for you — one pitch, one out.

On board with Josh Hamilton, baggage included (10/2012): Josh Hamilton, who finished this past May with more home runs than anybody on the Seattle Mariners hit all season, soon will be mulling offers on where he’ll resume his uniquely turbulent baseball career.

Miguel Cabrera ties Josh Hamilton in HRs; Tigers beat Twins (09/2012): MINNEAPOLIS - Miguel Cabrera hit a three-run homer to move into at least a tie for the lead in all three triple...

It's time for Dez Bryant to be more like Josh Hamilton (08/2012): Parallel lives diverge in one key way: Josh Hamilton is a great player.

Ranger Of The Week: Josh Hamilton (04/2012): Some times you have a good week, other times you're just solid all around. That's the way to describe Josh Hamilton's 2012 campaign so far.

Texas Rangers' Josh Hamilton hopes his latest relapse was the last (02/2012): Slugger Josh Hamilton says he's in a much better place emotionally and spiritually the past three weeks.

If Josh Hamilton plays every day, cash and union love will follow (01/2012): A lot is riding on Josh Hamilton's health this season.

Deadly Fall: Josh Hamilton's Foul Ball Toss Results in Fan's Tragic Death (12/2011): For the third time this year, a tragic incident took place in the stands at a baseball game. This time, Rangers MVP Josh Hamilton tossed a foul ball into the crowd and a fan reached too far and fell 20 feet to his eventual death. Contributor: Robert Dougherty Published: Jul 08, 2011

Josh Hamilton relies on faith to cope with fan tragedy (07/2011): There's no way for any of us to know how Josh Hamilton feels these days, but if you ask him, he will do his best to let you know. That says a lot in itself.

Rangers' Josh Hamilton back in hard-playing form | Larry Stone notebook (05/2011): Josh Hamilton is back with the Rangers after missing six weeks with a fractured bone in his right shoulder. He injured himself on a headfirst dive into home plate in a loss to Detroit.

Slugger Stays Grounded: Success has not spoiled Josh Hamilton (03/2011): MYRTLE BEACH -- Josh Hamilton was in uniform and on a baseball field in South Carolina for the first time in a decade Tuesday night, smashing batting practice pitches all over and well beyond BB&T Coastal Field.

Josh Hamilton cashes in with Rangers (02/2011): AL MVP Josh Hamilton and the Texas Rangers agreed Thursday to a two-year contract that avoids an arbitration hearing next week.

Josh Hamilton getting healthy, ready for arbitration (01/2011): ARLINGTON, Texas - Josh Hamilton is swinging a bat again and regaining his energy after spending six days in the...