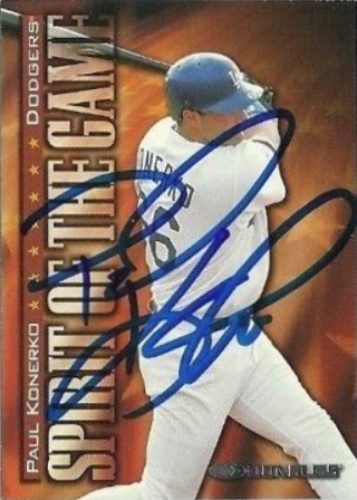 Paul Henry Konerko (/kəˈnɛərkoʊ/; born March 5, 1976) is an American former professional baseball first baseman who played in Major League Baseball (MLB) for the Los Angeles Dodgers, Cincinnati Reds and, for most of his career, the Chicago White Sox. Konerko helped the White Sox win the 2005 World Series over the Houston Astros, the franchise's first since 1917. From 2006 to 2014 he served as the White Sox captain. More about Paul Konerko

Current items with a signature of Paul Konerko

These are the most current items with a signature of Paul Konerko that were listed on eBay and on other online stores - click here for more items.

Traded items with a signature of Paul Konerko

Most recently, these items with a signature of Paul Konerko were sold on eBay - click here for more items.

Paul Konerko Has A Good Bad Idea For The Hall Of Fame (12/10/18): The baseball world is very bored right now, and so is in high dudgeon over the election to the Hall of Fame of Lee Smith (fine, whatever) and Harold Baines. Harold Baines! It’s alternately inexplicable (Harold Baines was good for a long time, but c’mon, he’s no Ryan Klesko) and completely explicable

Paul Konerko to be honored at CSN Sports Awards (03/2015): One of Chicago sports TV’s best traditions continues with the 27th annual Comcast SportsNet Sports Awards at the Hilton Chicago Wednesday at 7:30 p.m. The event has raised more than $11 million for The March of Dimes.

White Sox to retire Paul Konerko’s No. 14 on May 23 (01/2015): Paul Konerko retired last October after spending 18 seasons in the majors and the White Sox aren't wasting any time to honor their longtime slugger.

White Sox's Paul Konerko exits to chants of 'Paulie' (09/2014): Chants of “Paulie! Paulie!” rang out at U.S. Cellular Field on Sunday afternoon as Paul Konerko exited the field for the final time in his 18-year major league career.

White Sox veteran Paul Konerko gets autographed base from Yankees in final trip (08/2014): Derek Jeter has been collecting retirement gifts in every road city that the Yankees have traveled to in his farewell season, but he did the presenting Sunday afternoon in New York ...

Paul Konerko's baseball career is a tale of excellence (06/2014): It is a slur, a slam, a label that carries the air of disparagement. When the Cooperstown debates flare anew each winter, candidates who do not measure up in the eye of the beholder are dismissed with these words: "It is the Hall of Fame, not the Hall of Very Good."

Paul Konerko's streak of openers for Chicago White Sox to end at 15 (03/2014): And the 38-year-old first baseman is comfortable with that decision, which ends a streak of 15 consecutive opening-day starts. Konerko's new role is as a right-handed-hitting platoon player at designated hitter.

Paul Konerko relieved to know this is his final White Sox season (01/2014): Retirement question no longer lingering over team captain Paul Konerko feels some relief in the finality of this year's SoxFest.

Paul Konerko free agency: 1B uncertain about future with White Sox (10/2013): Update : White Sox general manager Rick Hahn has not ruled out bringing Konerko back for 2014, reports Doug Padilla of ESPN . The team has stayed in touch with Konerko while in the process of signing Abreu.

White Sox rumors: Paul Konerko waiting to make decision on future (09/2013): Loading... "I am going to go at the pace I have been going at; you only get one of these careers. It is not like I have the right answer so I will continue to do what I feel is right..."

Paul Konerko Scores Because Wall At Kauffman Stadium Eats Baseball (08/2013): The White Sox are last in the AL Central, and last in the AL in runs scored. Perhaps they should have thought of this strategy sooner. Read more...

White Sox take Paul Konerko off 15-day DL (07/2013): CHICAGO (AP) -- The Chicago White Sox have brought back first baseman/designated hitter Paul Konerko from his rehab assignment at Double-A Birmingham and reinstated him from the 15-day disabled list before Monday's game against the Detroit Tigers.

Paul Konerko won’t play until at least Sunday, could be DL’d (06/2013): Paul Konerko has been out of action since last Sunday. And he’s going to be out a while longer: Konerko said Sunday is earliest he’d likely play. Had six injections in his back today, MRI on Thursday. — Dan Hayes (@DanHayesCSN) June 28, 2013   The Sox have had two days off this week so…

Paul Konerko leads White Sox over Mariners, 9-8 (08/2012): CHICAGO - Not even a six-run ninth inning could keep Seattle's winning streak alive. After the Mariners...

Arlington, TX - Adam Dunn clubbed his major league-leading 31st homer and Paul K (07/2012): Philip Humber (5-5) pitched six-plus innings and allowed four hits, including a homer to Mike Napoli in the fifth inning, and won for the third time in his last four starts.

R.A. Dickey, Paul Konerko named players of the week (05/2012): The Player of the Week Awards came out, and the winners are R.A. Dickey in the NL and Paul Konerko in the AL. Dickey was 2-0 in two starts, striking out 21 batters and allowing a single earned run in 14 and a third innings pitched for a 0.63 ERA for the week. No surprise at all…

Amid all the turmoil, Paul Konerko stands tall (09/2011): Don't blame Paul Konerko for the White Sox ' miserable season. The veteran first baseman has 30 or more home runs and 100-plus RBI for the fifth time in his career after going deep in Sunday's 10-5 win at Kansas City.

Paul Konerko, Carlos Pena Signings Headline Day 3 of Winter Meetings, Cliff Lee (12/2010): LAKE BUENA VISTA, Fla. -- The baseball winter meetings began with two big names, and their quest for a new home, on everyone’s mind. They may end with no resolution on either front.