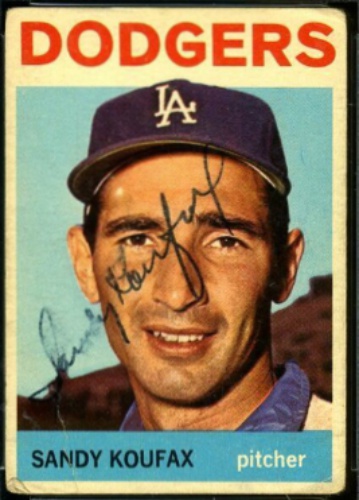 Sanford Koufax (/ˈkoʊfæks/; born Sanford Braun; December 30, 1935) is an American former left-handed pitcher in Major League Baseball (MLB) who played his entire career for the Brooklyn/Los Angeles Dodgers from 1955 to 1966. He has been hailed as one of the greatest pitchers in baseball history. After joining the major leagues at age 19, having never pitched a game in the minor leagues, the first half of his career was unremarkable, posting a record of just 36–40 with a 4.10 earned run average (ERA); he was a member of World Series champions in both Brooklyn and Los Angeles, though he did not appear in any of the team's Series wins. But after making adjustments prior to the 1961 season, and benefitting from the team's move into expansive Dodger Stadium a year later, Koufax quickly rose to become the most dominant pitcher in the major leagues before arthritis in his left elbow ended his playing days prematurely at age 30. More about Sandy Koufax

Current items with a signature of Sandy Koufax

These are the most current items with a signature of Sandy Koufax that were listed on eBay and on other online stores - click here for more items.

Traded items with a signature of Sandy Koufax

If you're interested in Sandy Koufax Rookie cards you might want to take a look at our sister site that specializes in Baseball Rookie Cards only.

Most recently, these items with a signature of Sandy Koufax were sold on eBay - click here for more items.

Dodgers unveil Koufax's statue outside stadium (06/19/22): Los Angeles Dodgers legend Sandy Koufax was on hand Saturday when the team unveiled a bronze statue of him outside Dodger Stadium.

Dodgers set to honor Koufax with statue unveiling (03/15/22): The Dodgers will unveil a statue of Hall of Famer Sandy Koufax on June 18, after initial plans were changed by the COVID-19 pandemic.

The All-Sandy Koufax Team: Players who dominated most during their peak years (02/08/22): Koufax's brief run of greatness got him into the Hall of Fame. Here's a list of players at each position whose best might have been better than anyone else's.

The enduring bond between Jackie Robinson and the man who guided him to the majo (12/30/20): Clyde Sukeforth, who scouted Jackie Robinson, Roberto Clemente and Sandy Koufax and signaled to the Dodgers' dugout that Ralph Branca was ready to face Bobby Thomson, is in the Hall of Fame not as a player, but as a painting.

Johnson, who helped Dodgers win '65 Series, dies (10/2020): "Sweet" Lou Johnson, who hit a key home run for the victorious Los Angeles Dodgers in Game 7 of the 1965 World Series and scored the only run in Sandy Koufax's perfect game the same year, has died. He was 86.

'Trying to hit Sandy Koufax was like drinking coffee with a fork' (06/2020): His career was short, but it was dominant. "No one," Frank Robinson said, "could hit that man."

Jewish athletes condemn anti-Semitism after temple shooting (12/2018): FOXBOROUGH, Mass. (AP) — Memphis Grizzlies forward Omri Casspi, who was born in Israel, was early in his NBA career when he saw a picture of himself defaced with a

Ask The Experts: How Much Is My Baseball Signed By Sadaharu Oh And Sandy Koufax (04/2015): In 1984 a nine-year-old boy met some of the greatest baseball players ever and got them to sign his baseball. Today, find out what makes it special and how much it's worth.

Sandy Koufax, Vin Scully added to Dodgers bobblehead lineup (03/2015): The Dodgers will again make bobbleheads of their two greatest icons as they add dolls of Sandy Koufax and Vin Scully to their promotional calendar for the upcoming season.

Sandy Koufax expects Dodgers' Clayton Kershaw to win in postseason (02/2015): Sandy Koufax said he didn’t know what to make of the changes to the Dodgers roster or how teenage pitching prospect Julio Urias’ career will unfold.

Why not start Madison Bumgarner and see if he can pull a Sandy Koufax? (10/2014): This has been some postseason for the Giants’ Madison Bumgarner. Record stuff, really. So good you now have to wonder if he can take it to that sacred level:

Sandy Koufax once owned a glorious motel (05/2014): Me, 1966-vintage Michelle Phillips and rum drinks with umbrellas in them just chillin' by the pool at Sandy Koufax's Tropicana Motel.

Sandy Koufax's 10 Greatest Jewish Baseball Moments (03/2014): When ranking top moments in Jewish baseball history, it’s obvious Sandy Koufax needs his own category. Here are 10 highlights of the career of God’s lefthander. Click here for the rest of the article...

Sandy Koufax jump-started my grandfather's $300 Oldsmobile (11/2013): In 1958, Max Prince's grandfather, who hated cars, hauled his family down to Florida in a beater Oldsmobile to see his beloved Dodgers. When the Olds broke down on the side of the road, the old man thought his dreams were crushed. Then something incredible happened. Read more...

Woodsville coach recounts call from Sandy Koufax (08/2013): When semi-reclusive Sandy Koufax, the all-time great Dodgers pitcher, does emerge, it?s usually to hold court on a subject that has eluded most mortals since the 19th century: the mysterious art of throwing a baseball.

Five things you didn't know about Sandy Koufax (06/2013): Most Dodgers fans know of Sandy Koufax's perfect game against the Cubs in 1965 along with the two World Series MVPs and three Cy Young Awards.

Bartlesville contacted about hosting Sandy Koufax World Series in August (05/2013): Bartlesville could be the site of a session of congress. No, not that congress.

Was Baseball Great Hank Greenberg Even Braver Than Sandy Koufax ? (04/2013): Hank Greenberg faced an awful dilemma on Rosh Hashanah in 1934. A new book reveals how the Jewish star became a city’s hero as a rising tide of anti-Semitism swept the globe. Click here for the rest of the article...

Sandy Koufax's return to Dodgers applauded by former teammates (01/2013): “I think it’s great,” Lasorda said. “Having Sandy here is always a great move. He’s very popular and one of the greatest pitchers that ever wore a Dodgers uniform.”

Before Baseball Left Brooklyn, Sandy Koufax Left Basketball (08/2012): That Sandy Koufax was a talented basketball player in Brooklyn before becoming a baseball Hall of Famer gives the Nets’ arrival in the borough just a little more heft.

Puerto Rico wins Sandy Koufax World Series championship (07/2012): VERO BEACH — Players got up early from their rooms Sunday at the Vero Beach Sports Village, but their bats were still asleep.

Sandy Koufax On Bernard Madoff – Mets Trial Witness List (03/2012): Hall of Fame pitcher Sandy Koufax is among witnesses scheduled to testify at a trial next week to determine if the New York Mets' owners must give up millions of dollars they received from jailed financier Bernard Madoff.

Hall of Fame pitcher Sandy Koufax was extremely complimentary of Clayton Kershaw (02/2012): The Dodgers late Thursday proposed a compromise that would let attorneys for Bryan Stow proceed with their litigation against the team.

Why we can't forget Sandy Koufax (09/2011): A brief, brilliant career of a pitcher whose off the field achievements helped shape an enduring legacy

Vipers qualify for Sandy Koufax World Series (07/2011): The West Hill Vipers won the Sandy Koufax 14U Regional baseball tournament in Kent over the weekend, and now brace for a lot more baseball as they will be playing in back-to-back World Series events.

Today's obituaries: John Rumler, 70, coached baseball for Albion High School, Sa (05/2011): John RumlerJohn Rumler, 70, of Albion, passed away May 6. A graduate of St. Mary's School in Jackson, Rumler moved to Albion in 1967 when he became a prominent business man and Community Advocate. He owned and operated several A...