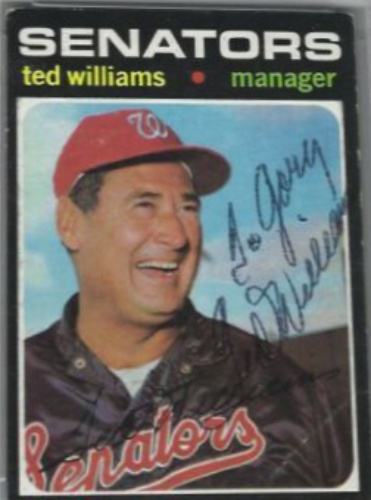 Theodore Samuel Williams (August 30, 1918 – July 5, 2002) was an American professional baseball player and manager. He played his entire 19-year Major League Baseball (MLB) career, primarily as a left fielder, for the Boston Red Sox from 1939 to 1960; his career was interrupted by military service during World War II and the Korean War. Nicknamed "Teddy Ballgame", "the Kid", "the Splendid Splinter", and "The Thumper", Williams is regarded as one of the greatest hitters in baseball history and to date is the last player to hit over .400 in a season. More about Ted Williams

Current items with a signature of Ted Williams

These are the most current items with a signature of Ted Williams that were listed on eBay and on other online stores - click here for more items.

Traded items with a signature of Ted Williams

If you're interested in Ted Williams Rookie cards you might want to take a look at our sister site that specializes in Baseball Rookie Cards only.

The most expensive item with a signature of Ted Williams (2020 Topps Dynasty Ted Williams Dual Relic Cut Signature 1/1 Rare) was sold in December 2021 for $9000.00 while the cheapest item (1994 Ted Williams Football BOB LILLY On Card Autograph Dallas Cowboys HOFer) found a new owner for $0.99 in October 2022. The month with the most items sold (96) was December 2021 with an average selling price of $80.50 for an autographed item of Ted Williams. Sold items reached their highest average selling price in August 2012 with $743.18 and the month that saw the lowest prices with $12.78 was April 2011. In average, an autographed item from Ted Williams is worth $111.00.

Most recently, these items with a signature of Ted Williams were sold on eBay - click here for more items.

Buster Olney's top 10s for 2021: Ranking MLB's best outfielders (01/07/21): From an October show-stopper to the best player on the planet to the new Ted Williams, baseball's outfields are stacked.

Carroll Hardy, Athlete With a Unique Distinction, Dies at 87 (08/12/20): He was a college star in three sports and a successful N.F.L. executive. But he was better known as the only man who ever pinch-hit for Ted Williams.

'Pop, I just saw Ted Williams hit' (06/17/20): That's how special it was to see Ted Williams at the plate or in the batting cage. You picked up the phone and called someone.

Red Sox Prospect Sean Coyle Drawing From Ted Williams, Dustin Pedroia (03/2015): Sean Coyle is drawing from the past and present as he looks toward the future....

Ted Williams, homeless man with 'golden voice' to speak at Safe Harbour gala (01/2015): Congratulations! Your weather is set to . You can change the location at any time. Don't have an account?

New Padre slugger undergoes surgery to receive Ted Williams' unfrozen lower half (12/2014): When the Padres snagged Matt Kemp from the Los Angeles Dodgers, it was the biggest deal in the team's history.

'Golden Voice' Ted Williams Visits The QCA (11/2014): He's the man with the "Golden Voice". Ted Williams was discovered in Columbus, OH three years ago. He was homeless, but quickly rose to fame when people heard him speak.Now he's in the Quad Cities...

All Abuzz: Today Show highlights ‘Golden Voice’ Ted Williams’ fight for recovery (10/2014): Ted Williams, the Columbus homeless man who rocketed to fame with his golden voice, made a second appearance on Today this morning.

Bud Selig: Ted Williams Said I Have ‘Hardest Job In America’ (09/2014): BOSTON — It’s no surprise that Bud Selig has a few interesting stories after serving...

Tony Gwynn: A Kindred Spirit Of Ted Williams, A Favorite Of Anyone Who Loves Bas (06/2014): As a Red Sox fan who grew up wishing Tony Gwynn played here, I still envy San Diego for getting to have the real thing all those years. Like everyone who loves baseball, I mourn with them today.

Best Ever: The Making Of "What Do You Think Of Ted Williams Now?" (03/2014): This piece originally appeared in the eighth issue of The Classical Magazine . It is reprinted here with permission. Read more...

Russ Lemmon: Author of acclaimed Ted Williams biography coming to Vero Beach Boo (02/2014): Interesting questions are sure to be directed at author Ben Bradlee Jr. ("The Kid: The Immortal Life of Ted Williams") during his appearance Monday at the Vero Beach Book Center.

1.30.14: Rethinking Death, Ethics of Wildlife Photography & Ted Williams (01/2014): Today on Word of Mouth we wrap up our series Rethink 2014 with, perhaps, the most difficult concept …death. Then we delve into a discussion about the...

Book review: "The Kid: The Immortal Life of Ted Williams" (12/2013): It was incongruous. Ted Williams had what many believe was the most graceful, simple swing in baseball history.

Jim Shea: Even With A Beard, Ted Williams Would Not Have Fit With 2013 Red Sox (11/2013): Lacked the personality to be a personality There was, of course, no bigger story this past week than the Red Sox winning the World Series.

Lakeville polls returning to Ted Williams Camp (10/2013): LAKEVILLE — The voting booths and other equipment for town, state and federal elections have "graduated" from the George R. Austin Intermediate School and will be heading back to the Ted Williams Camp in April.

Timeless David Ortiz matches up with another Red Sox legend, Ted Williams (09/2013): BALTIMORE — David Ortiz stroked his 30th home run Friday night and now has seven 30-homer, 100-RBI seasons in his 17-year career, all in his 11 seasons with the Red Sox.

1 Stock's Incredible Run and an Investing Lesson From Ted Williams (07/2013): The best of Wednesday's tweets for finance sector investors.

Boston Mayor Menino Stepping Down a la Ted Williams (03/2013): Another long-serving public official will be hanging up his hat: Boston’s longest-serving mayor, Tom Menino, won’t seek a sixth term as head of the Bay State’s capital city. Menino, 70, has served Boston as the mayor since 1993, when he ascended to the position after...

Careful, Tigers! Ted Williams was injured during World Series layoff in 1946 (10/2012): Like the 1946 Red Sox, the Tigers have a layoff of several days before the World Series.

Ted Williams excelled at more than just baseball (08/2012): It was an otherwise quiet Friday evening on a Fourth of July weekend 10 years ago last month.

Ted Williams tops Joe DiMaggio in orders for new commemorative stamps (06/2012): The Splendid Splinter is finally getting the best of the Yankee Clipper when it comes to pre-orders of stamps from a new set featuring Ted Williams, Joe DiMaggio, Willie Stargell and Larry Doby.

Ted Williams Stamps Available In July (05/2012): Fans of Ted Williams and the Boston Red Sox will have a new piece of memorabilia to add to their collection next month.

Ted Williams MVP plaque fetches nearly $300K US (04/2012): A 1949 MVP plaque owned by Boston Red Sox slugger Ted Williams has sold for nearly $300,000 US at the first major auction of his sports, military and personal memorabilia.

Ted Williams’s Memorabilia to Be Auctioned at Fenway (03/2012): The daughter of the Red Sox Hall of Famer Ted Williams is releasing a collection of his personal items for auction April 28 in Boston.

Ted Williams, Joe DiMaggio and Lou Gehrig Among Baseball’s Most Overrated Hitter (01/2012): There is more than one way to skin Wins Over Replacement, and I think voters properly account for peak value when ranking batters.

Push For Ted Williams Statue Downtown (11/2011): Bill Swank, a local baseball historian, says it's time one of San Diego's most prolific baseball players to be honored with a statue downtown.

Ted Williams' relics of a ‘Splendid’ life (09/2011): Memorabilia on display through October at the San Diego Hall of Champions

Johnny Damon has as many career hits as Ted Williams (07/2011): If you aren't reading Joe Posnanski already, then shame on you. Sentence-for-sentence, there isn't a better writer working in America. At the top of the list was this: Johnny Damon's 2,654 hits is equal to Ted William's career total.

Golden-voiced Ted Williams returns to rehab (05/2011): An Ohio homeless man with a smooth radio voice that made him an online sensation says he's going back into rehab for alcohol and drug dependency.

The Morning Fix: Up and down year for Hollywood. Farrelly Brothers ready to shoc (02/2011): After the coffee. Before figuring out how huge the backlash will be against Cameron Diaz for "Bad Teacher." The Skinny: I don't know about you but I'm pretty hyped out on Oscars. In other news, the Farrelly Brothers want to...

From Rags to Riches to Rehab: Lessons from the Ted Williams Story (01/2011): One Nashville real estate mogul feels a calling to help the homeless—golden-voiced or otherwise.