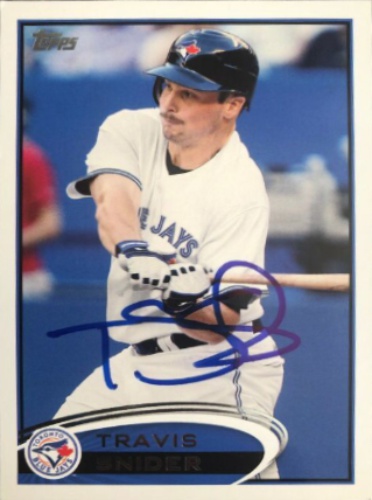 Current items with a signature of Travis Snider

These are the most current items with a signature of Travis Snider that were listed on eBay and on other online stores - click here for more items.

Traded items with a signature of Travis Snider

If you're interested in Travis Snider Rookie cards you might want to take a look at our sister site that specializes in Baseball Rookie Cards only.

The most expensive item with a signature of Travis Snider (Travis Snider Signed + Game Used Cracked Bat MLB Coa Pittsburgh Pirates) was sold in March 2022 for $199.99 while the cheapest item (TRAVIS SNIDER Signed 2007 Midwest League Autograph AUTO) found a new owner for $0.01 in October 2009. The month with the most items sold (20) was April 2009 with an average selling price of $25.25 for an autographed item of Travis Snider. Sold items reached their highest average selling price in March 2022 with $199.99 and the month that saw the lowest prices with $0.99 was November 2020. In average, an autographed item from Travis Snider is worth $9.99.

Most recently, these items with a signature of Travis Snider were sold on eBay - click here for more items.

Travis Snider retires after 8 big league seasons (01/13/22): Travis Snider announced he will transition to a "former player" on retire from Major League Baseball after an eight year career.

Travis Snider and Alejandro De Aza fall in step with Orioles' team-first mantra (04/07/15): In postgame interviews following the Orioles’ 6-2 victory over the Tampa Bay Rays Monday, outfielders Travis Snider and Alejandro De Aza were already toeing the company line. Both spewed cliches about how it’s all about the team and not individual accomplishments.

With a couple of RBIs and great defense, Travis Snider is driving force in O's w (04/06/15): Travis Snider has made it clear since he was traded to the Orioles in January that he's not Nick Markakis. He's not trying to be Markakis or trying to replace Markakis.

Travis Snider and Alejandro De Aza fall in step with Orioles' team-first mantra (04/2015): In postgame interviews following the Orioles’ 6-2 victory over the Tampa Bay Rays Monday, outfielders Travis Snider and Alejandro De Aza were already toeing the company line. Both spewed cliches about how it’s all about the team and not individual accomplishments.

Recording swings helps Travis Snider stay on the ball (03/2015): Just before his round of batting practice begins, as Orioles outfielder Travis Snider reaches into his equipment bag for his bat, he also pulls out a tripod.

Pirates Receive PTBNL From Orioles To Complete Travis Snider Trade (02/2015): When the Pirates traded outfielder Travis Snider to the Baltimore Orioles, they received 21-year-old pitcher Stephen Tarpley and a player to be named later.

The story behind new Oriole Travis Snider's interesting Twitter handle (01/2015): I had the opportunity to speak with new Orioles outfielder Travis Snider by phone on Wednesday. During our conversation, I had to sneak in a question about Snider's Twitter handle, @LunchboxHero45, which has to be one of the most creative I've seen.

Orioles talking with Pirates about a trade for Travis Snider (12/2014): The Orioles engaged in preliminary trade talks this week with the Pittsburgh Pirates on a deal involving left-handed pitcher Brian Matusz and Pirates outfielder Travis Snider, according to industry sources.

Gene Collier: Travis Snider turns the tide (08/2014): The Pirates reliably include in their helpful daily press notes a short index of dates under the heading, "THE LAST TIME ..."

Sweet potatoes 1, Travis Snider 0 (02/2014): Hey man, it happens: Travis Snider‘s toe is doing well, but another minor scrape will keep him from throwing for a day or two. Snider cut a finger on his left hand while chopping a sweet potato and has a bandage on the tip of the finger. There are way worse things with which to injure…

On the Pirates: Recharged Travis Snider is 'a good hitter with power' (05/2013): How Snider gets power by not looking for it. Also: comeback wins on rise; pitcher Mark Melancon next in line; Detroit Tigers = new rivals.

Travis Snider gets first start of season Friday night against the Los Angeles Do (04/2013): After seeing only pinch-hitting duties in the season-opening series, right fielder finally gets his chance.

Travis Snider Healthy, Ready To Compete For Right Field Job (02/2013): At the trade deadline in 2012, the Pirates sent their 2006 first-=round draft pick to the Toronto Blue Jays' Brad Lincoln was having a breakout season as a mid-to-late inning reliever and proved to be a formidable force in the Pirates bullpen.

Jays deal Travis Snider & Eric Thames for pitching help (08/2012): The Jays will get Brad Lincoln from Pittsburgh and Steve Delabar from Seattle.

Travis Snider Looking Forward To Opportunity, Playoff Race (07/2012): Pirates Outfielder Travis Snider joined Seibel, Starkey and Miller on Sportsradio 93-7 The FAN to talk about getting traded to the Pirates, and what he's expecting from himself with a fresh start.

Travis Snider maturing in the minors (06/2012): After spending parts of the past four seasons with the Blue Jays, Travis Snider came into this spring fighting for his job in left field. It was a battle he lost. But rather than worry about what might lie ahead in Toronto, his mindset is on the present.

Sent down by Blue Jays, Travis Snider making most of his time with 51s (04/2012): At this point in his professional baseball career, highly touted prospect Travis Snider expected to be a regular in the big leagues.

Is this the end for Travis Snider in Toronto? (08/2011): Getting sent down to the minors once again puts young outfielder’s Blue Jay career in jeopardy

Travis Snider hits 3-run shot as Jays rout Mariners (07/2011): Travis Snider has undergone his fair share of trials and tribulations during his career, but he seems to have finally turned a corner and found a reliable state of mind.

Travis Snider doubles home winning run as Blue Jays beat Yankees (04/2011): TORONTO - The New York Yankees are never more comfortable than when they hand a lead to Mariano Rivera. But even...