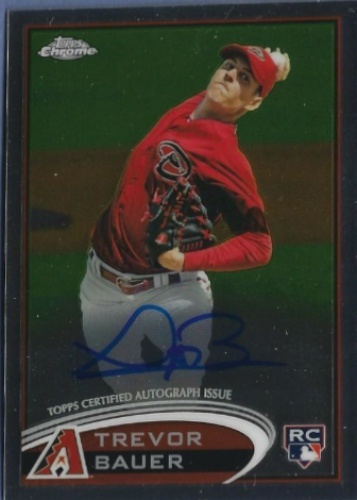 Current items with a signature of Trevor Bauer

These are the most current items with a signature of Trevor Bauer that were listed on eBay and on other online stores - click here for more items.

Traded items with a signature of Trevor Bauer

If you're interested in Trevor Bauer Rookie cards you might want to take a look at our sister site that specializes in Baseball Rookie Cards only.

The most expensive item with a signature of Trevor Bauer (trevor bauer signed autograph spider tack Unused auto Dodgers Baseball jsa coa) was sold in November 2021 for $699.99 while the cheapest item (Trevor Bauer 2009 Upper Deck Signature Stars Prospect #USA21 Indians M9) found a new owner for $0.89 in July 2019. The month with the most items sold (56) was February 2021 with an average selling price of $38.50 for an autographed item of Trevor Bauer. Sold items reached their highest average selling price in November 2016 with $94.99 and the month that saw the lowest prices with $0.99 was November 2013. In average, an autographed item from Trevor Bauer is worth $22.50.

Most recently, these items with a signature of Trevor Bauer were sold on eBay - click here for more items.

Woman countersues Bauer's defamation claim (08/12/22): A San Diego woman who alleges Dodgers pitcher Trevor Bauer sexually abused her has filed a countersuit to his defamation claim, alleging the baseball star beat her and left her bruised, according to a court filing.

Source: Bauer's hearing vs. MLB to begin May 23 (05/13/22): Trevor Bauer's grievance hearing against Major League Baseball will begin May 23, a source told ESPN on Friday.

Will Trevor Bauer ever pitch in MLB again? What's next after unprecedented 324-g (04/29/22): Major League Baseball handed out the longest suspension in the history of its domestic violence policy. Here's what it means for Bauer, the Dodgers and baseball.

Hernández: Trevor Bauer's impasse with MLB creates a continuous nightmare for Do (04/2022): Trevor Bauer might be out of sight, but he is not out of mind for the Dodgers as the pitcher looks into whether he can challenge his administrative leave.

Bauer files defamation suit against The Athletic (03/2022): Dodgers pitcher Trevor Bauer sued The Athletic and former reporter Molly Knight on Tuesday, accusing them of "creating and spreading the false narrative" that he had fractured a woman's skull during a sexual encounter.

Report: Dodgers' Trevor Bauer will not be criminally charged after sexual assaul (02/2022): The district attorney's office declined to press charges. MLB could still issue a suspension.

Did the Trevor Bauer uncertainty lead to Max Scherzer signing with the Mets? (11/2021): Max Scherzer will not return to the Dodgers for the 2022 season. He has agreed to a three-year, $130-million contract with the New York Mets.

Dodgers' Trevor Bauer out for rest of 2021 season as MLB investigates sexual ass (09/2021): Bauer is done pitching in 2021 with the league and MLBPA agreeing to extend his administrative leave again

Bauer case goes to DA; leave extended by MLB (08/2021): The Pasadena Police Department has concluded its investigation into the assault allegations surrounding Trevor Bauer and turned the case over to the Los Angeles County District Attorney's Office.

Hearing on Bauer restraining order delayed again (07/2021): The civil hearing for the temporary restraining order against Dodgers pitcher Trevor Bauer has been moved to Aug. 16-19. The hearing was originally scheduled for Aug. 3, 4 and 19, but Bauer's side once again asked for a continuance, sources told ESPN.

Trevor Bauer is going to dominate the Rockies tonight, other best bets for Tuesd (04/2021): The Rockies offense is not good

Samson: Why Trevor Bauer is 'out of character' signing for Dodgers (03/2021): David Samson weighed in on his latest podcast

Samson: Trevor Bauer's Twitter antics are becoming a distraction for him and the (02/2021): David Samson breaks down the impact of his Twitter fight with Noah Syndergaard

MLB roundtable: Trevor Bauer is the best free agent left on the market; where wi (01/2021): The Mets, Angels and others have been linked to the reigning NL Cy Young Award winner

Trevor Bauer trolls Braves fans after Reds' loss, gets made fun of by Ronald Acu (10/2020): Bauer keeps posting through it

'Hold my beer': Why Budweiser is honoring Trevor Bauer with Cincinnati Buds (08/2020): Not sure what was behind the Reds ace miming chugging beer on the mound? Here's the backstory of the challenge between Bauer and the King of Beers.

Trevor Bauer wants to start every fourth day in 60-game season, and the Reds mig (07/2020): Bauer has long desired to to do so, and the Reds may grant his wish during the shortened 2020 season

Trevor Bauer calls out Scott Boras, tells agent to keep 'personal agenda' out of (05/2020): MLB and MLBPA are continuing to negotiate, and tensions seem to be rising

Reds' Trevor Bauer: MLB's popularity would soar when sport returns if games were (03/2020): Bauer detailed a few strategies that Major League Baseball could employ to spread the sport even further when it returns

Bauer: 'Positive' reaction to playoff plan criticism (02/2020): Reds pitcher Trevor Bauer says he has gotten a positive response to his criticism of a plan being considered by Major League Baseball to expand the playoffs, one that includes an extended break for top seeds and some teams choosing who they will play.

Reds' Bauer skirts arbitration with 1-year deal (01/2020): Trevor Bauer agreed to a one-year, $17.5 million deal with the Cincinnati Reds on Friday, bypassing salary arbitration after the All-Star pitcher had a contentious hearing with Cleveland last offseason.

Reds' Trevor Bauer has $300K sports car destroyed in bizarre accident at dealers (11/2019): At least the Reds starting pitcher had the car insured

Bauer: Indians can be best team in MLB (02/2019): Cleveland Indians pitcher Trevor Bauer is bullish about his team's chances this season.

Cleveland Indians thumped by Angels: Trevor Bauer allows four triples in one inn (03/2015): It has been a disquieting spring for Trevor Bauer. From his drone being grounded to allowing massive amounts of extra base hits, the desert has not treated Bauer kindly.

Cleveland Indians pitcher Trevor Bauer and his quest to think about not thinking (01/2015): Pitching occupies his brain at almost every moment. Thus, he is on a quest to stop thinking.

Trevor Bauer’s offseason program is pretty high tech (12/2014): His video equipment is in the Best Shape of Its Life.

Inside the brain of Trevor Bauer, the Cleveland Indians pitcher who simply canno (09/2014): When Yogi Berra once quipped that 90 percent of the game is half mental, he underestimated Bauer's mental capacity. "My game is probably too much mental a lot of the time," Bauer said. "I've actually had to train myself to not think."

Indians 3, Astros 1: Trevor Bauer throws six shutout innings in victory (08/2014): The Indians are preparing to embark on a stretch of 30 games in 30 days. At least they’ll head into that stretch fresh off two wins and an off day after defeating the Houston Astros 3-1 at Progressive Field on Sunday afternoon.

Terry Francona and Trevor Bauer discuss the Cleveland Indians' loss to Kansas Ci (06/2014): The Indians arrived to the Show Me State winners of nine of their last 10 games. They departed Missouri after two sluggish losses in 24 hours.

Yan Gomes' 'Goon Squad' graduation and Trevor Bauer's hitless inning: 5 observat (02/2014): Trevor Bauer labored through much of the first inning, in which he walked the first two hitters he faced. Still, don't draw too much of a conclusion from Bauer's outing.

Well-adjusted Trevor Bauer ready for spring training with Cleveland Indians (01/2014): Trevor Bauer is eager to put his "worst season in baseball' behind him.

A Browns decade like no other, profiling Matthew Dellavedova, Trevor Bauer stepp (12/2013): Here are what blogs from Cleveland and around the country are saying about the Browns, Cavaliers and Indians. Featured today are the Orange and Brown Report, Right Down Euclid and Did The Tribe Win Last Night.

Spotlight on Leon McFadden, Trevor Bauer's season and Kyrie Irving vs. Chris Pau (08/2013): Here are what blogs from Cleveland and around the country are saying about the Browns, Cavaliers and Indians. Featured today are Waiting For Next Year, Did The Tribe Win Last Night? and Right Down Euclid.

Headstrong is a tough way to play hardball for Trevor Bauer: Bud Shaw's Sunday S (06/2013): Trevor Bauer looked like a babe in the woods in his latest start for the Indians, Bud Shaw writes in his Sunday Spin column.