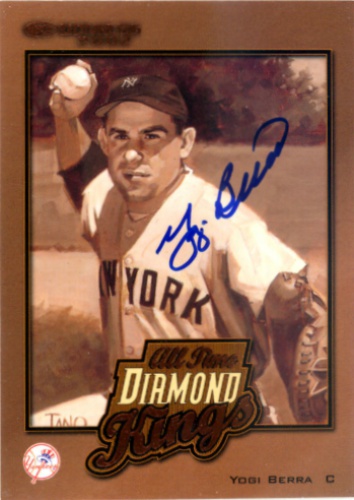 Lawrence Peter "Yogi" Berra (May 12, 1925 – September 22, 2015) was an American professional baseball catcher who later took on the roles of manager and coach. He played 19 seasons in Major League Baseball (MLB) (1946–1963, 1965), all but the last for the New York Yankees. He was an 18-time All-Star and won 10 World Series championships as a player—more than any other player in MLB history. Berra had a career batting average of .285, while hitting 358 home runs and 1,430 runs batted in. He is one of only six players to win the American League Most Valuable Player Award three times. He is widely regarded as one of the greatest catchers in baseball history and was elected to the Baseball Hall of Fame in 1972. More about Yogi Berra

Current items with a signature of Yogi Berra

These are the most current items with a signature of Yogi Berra that were listed on eBay and on other online stores - click here for more items.

Traded items with a signature of Yogi Berra

If you're interested in Yogi Berra Rookie cards you might want to take a look at our sister site that specializes in Baseball Rookie Cards only.

The most expensive item with a signature of Yogi Berra (Yogi Berra Autographed Game Bat Lot 74) was sold in July 2016 for $4650.00 while the cheapest item (1992 AUTOGRAPHED YOGI BERRA FRONT ROW THE ALL-TIME GREAT SERIES BASEBALL CARD) found a new owner for $0.16 in October 2022. The month with the most items sold (87) was September 2015 with an average selling price of $69.99 for an autographed item of Yogi Berra. Sold items reached their highest average selling price in July 2018 with $199.50 and the month that saw the lowest prices with $19.95 was January 2017. In average, an autographed item from Yogi Berra is worth $52.51.

Most recently, these items with a signature of Yogi Berra were sold on eBay - click here for more items.

Berra given first-class honor with U.S. stamp (06/24/21): The stamp honoring Yankees Hall of Famer Yogi Berra -- now being sold at post offices nationwide -- was dedicated during a ceremony at the Yogi Berra Museum & Learning Center in Little Falls, New Jersey, on Thursday.

Dodgers' Cody Bellinger hits game-winning homer in NLCS Game 7 vs. Braves (10/19/20): Bellinger now has something in common with Yogi Berra

A Man of Few Words, 90% of Them Memorable (04/12/20): Jon Pessah’s biography of Yogi Berra covers the quotes and the career as well as the sensitive person often obscured by his public image.

25 days of Yankee Numbers: No. 8 Yogi Berra and Billy Dickey (12/08/18): Lawrence Peter Berra, better known as 'Yogi,' spent most of his baseball career as a player, coach and manager in the Yankee organization.

25 days of Yankee Numbers: No. 8 Yogi Berra and Billy Dickey (12/2018): Lawrence Peter Berra, better known as 'Yogi,' spent most of his baseball career as a player, coach and manager in the Yankee organization.

What Yogi Berra Can Tell You About Oil Prices (03/2015): There’s an often repeated quip that says economic forecasters were invented to make meteorologists and astrologists look good.

Rolly: Like Yogi Berra, this Utah lawmaker didn't always say what he said (02/2015): New Utah House Speaker Greg Hughes has added a communications director to his staff. The post has been filled by veteran newspaper reporter and editor Chuck Gates. I predict Gates will earn his salary. I also expect a handful of high-maintenance Hou...

How Craig Biggio almost ended up with the Mets if not for the Devils owner and Y (01/2015): Biggio was voted into baseball's Hall of Fame Tuesday after a 20 year career with the Houston Astros. He never played for another major league team.

Yogi Berra’s museum to get replicas of stolen goods (10/2014): It ain’t over for the Yogi Berra Museum. Berra’s former teams, the Yankees and Mets, as well as Major League Baseball, will donate replicas of items that were recently stolen...

Yogi Berra and J.D. Salinger among famous heroes of D-Day (06/2014): Looking back at D-Day on Friday’s 70th anniversary of the Allied invasion, many of us know the event that changed the course of WWII only through such great films as...

Yogi Berra honors unsung high school athletes with "Best Teammate Award" (05/2014): The honorees include Kenny Davis, a Montclair football player who asked his coach to be taken out of a game because he felt his performance was hurting his team.

Yogi Berra's NJ Home Ready For Next Inning (04/2014): The home of New York Yankees' legend Yogi Berra is for sale, and the listing gives a nod to his playing days.

Yogi Berra and Carmen; Yankee's greatest love story in all times to come (03/2014): DiMaggio and Marilyn Monroe together fabricated the most glorious comple of all times and mostly because one of them was a Yankee and the other a famous hot star, but unfortunately they couldnt last...

Yogi Berra's latest honor marks heroism beyond baseball in the Bronx (10/2013): Yogi Berra approached enemy fire the same way he approached opposing pitchers. Relaxed. So relaxed, it might pass as obliviousness to pressure or danger.

Six Yogi Berra-isms the M's should take to heart (08/2013): There's not a lot that links the M's and the Yankees these days, but we'll take what we can get.

Ira Berkow at Yogi Berra Museum today (07/2013): If it’s about baseball and does not include pinstripes and the words New York Yankees, I don’t care so much. But Ira Berkow could make me care, even about The Mets.

STAN FISCHLER: Yogi Berra Museum worth trip (06/2013): What’s the most underrated, unlikely -- yet lovely -- museum within a two-hour drive from Kingston?

Yogi Berra confronts infamous harmonica one more time (01/2013): Yogi Berra is flanked by Roger Maris, left, and Mickey Mantle on the first day of spring training in 1964, a season that ended with a seven-game World Series loss and Berra's firing as manager.

Guzman's Home Run Highlights Speacial Day At Yogi Berra Stadium (08/2012): On the same day Joe Calfapietra is named the Can-Am League's Manager of the Year, he wins his 500th game in a Jackals uniform. It seems fitting Isaac Pavlik got the win.

By The Numbers: Yogi Berra And Other True MLB Heroes (07/2012): We use the word “hero” very easily and far too lightly. Yes, in a secondary way it can refer to someone who is admired for outstanding qualities or achievements.

What Yogi Berra Can Teach Winner of Presidential Race (06/2012): Yogi Berra had it right when he said: "If you come to a fork in the road, take it."

Yogi Berra on Baseball — and Business (04/2012): By the early 1980s, Yogi Berra was already a three-time American League Most Valuable Player, a 15-time All-Star and a 13-time World Series champion.

Baseball season means reading about everyone from Yogi Berra to Bill Veeck (03/2012): With the arrival of a new season, it's time for a shipment of baseball books.

MyStoryYourStory: 'You can observe a lot just by watching’ - Yogi Berra (11/2011): Here is where we came together for a few hours or more and made sense of all the nonsense. This is where we spectated from bleachers or couches, stadium or home, near or far.

BLOG: Yogi Berra-isms (03/2011): By Bill Campbell: Before we become seriously occupied with March Madness, and since we’re this close to baseball, I thought a little humor might rise to the occasion.