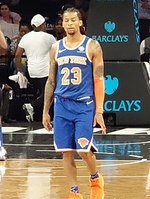 Alfonso Clark "Trey" Burke III (born November 12, 1992) is an American professional basketball player for the Dallas Mavericks of the National Basketball Association (NBA). He was drafted by the Minnesota Timberwolves with the ninth overall pick in the 2013 NBA draft and immediately traded to the Utah Jazz. He has also played with the Washington Wizards and New York Knicks. He played college basketball for the Michigan Wolverines where in the 2012–13 season, he earned National Player of the Year and led the 2012–13 Wolverines to the championship game of the 2013 NCAA Men's Division I Basketball Tournament. Shortly after the tournament he declared his eligibility for the draft. More about Trey Burke

Current items with a signature of Trey Burke

These are the most current items with a signature of Trey Burke that were listed on eBay and on other online stores - click here for more items.

Traded items with a signature of Trey Burke

The most expensive item with a signature of Trey Burke (Michigan Wolverines TREY BURKE SIGNED Autographed auto NCAA BASKETBALL jersey) was sold in March 2014 for $299.99 while the cheapest item (2015-16 Panini Excalibur Monumental Marks AUTO Trey Burke /199 Utah Jazz Signed) found a new owner for $0.74 in May 2019. The month with the most items sold (13) was March 2014 with an average selling price of $51.00 for an autographed item of Trey Burke. Sold items reached their highest average selling price in July 2020 with $250.00 and the month that saw the lowest prices with $8.99 was December 2017. In average, an autographed item from Trey Burke is worth $36.75.

Most recently, these items with a signature of Trey Burke were sold on eBay - click here for more items.

Watch this: Trey Burke talks about his tattoos, expecting son this month (06/2014): Ever want to know the meaning behind the tattoos on Trey Burke? The former Michigan star and Utah Jazz point guard talks about them in a video unveiled today by Bleacher Report.

Trey Burke apologizes for joining in Shaquille O'Neal's mocking of Detroit man w (04/2014): Burke landed in a storm stirred by Shaquille O'Neal this week, resulting in an apology posted on the Utah Jazz rookie's Twitter account on Wednesday.

Utah Jazz: Jazz rookie Trey Burke enjoys homecoming in Cleveland (02/2014): Trey Burke, who grew up in Columbus, Ohio, bought about 25 tickets for his parents, family and friends who made the 2...

Is Trey Burke the one that got away for the Pistons? (01/2014): AUBURN HILLS - There is a large group of Pistons fans who are still not over Detroit selecting Darko Milicic more than 10 years ago.

Jazz's Trey Burke Talks Rookie Expectations, Playing With Derrick Favors (09/2013): With the NBA becoming more of a guard-dominated league, this past off-season the Utah Jazz reloaded their back-court, in hopes of ensuring their franchise a promising future, drafting Michigan Wolverines phenom Trey Burke with the 9th pick in the 2013 Draft.

Trey Burke struggled with his NBA debut, but his Utah Jazz teammates have zero c (07/2013): Don’t have an account? Congratulations! Your weather is set to . You can change the location at any time. Want to set your local edition?

U-M's Trey Burke drafted No. 9 overall, then traded to Jazz (06/2013): Michigan point guard Trey Burke was selected No. 9 overall by the Minnesota Timberwolves in the NBA draft. He was then promptly traded to the Utah Jazz for the No. 14 and 21 overall picks, according to Yahoo! Sports' Adrian Wojnarowski.

Should Greivis Vasquez be moved to shooting guard if the Pelicans draft point gu (05/2013): Pelicans - Question of the day.

Trey Burke: 'I can say I've turned some Buckeye fans into Wolverine fans' (04/2013): The former Michigan point guard was honored by the Columbus City Council in his hometown Monday.