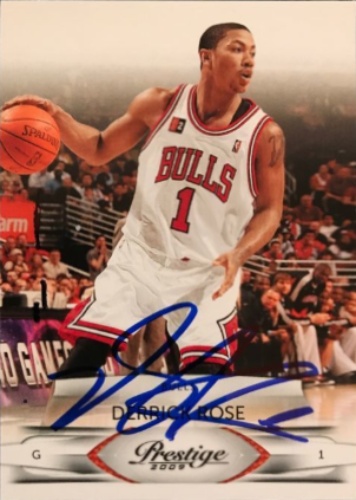 Derrick Martell Rose (born October 4, 1988) is an American professional basketball player for the Detroit Pistons of the National Basketball Association (NBA). He played one year of college basketball for the Memphis Tigers before being drafted first overall by his hometown Chicago Bulls in the 2008 NBA draft. He was named the NBA Rookie of the Year and also became the youngest player to win the NBA Most Valuable Player Award in 2011 at age 22. More about Derrick Rose

Current items with a signature of Derrick Rose

These are the most current items with a signature of Derrick Rose that were listed on eBay and on other online stores - click here for more items.

Traded items with a signature of Derrick Rose

Most recently, these items with a signature of Derrick Rose were sold on eBay - click here for more items.

Pistons' Rose hit with $25K fine for flinging pen (01/14/20): Pistons guard Derrick Rose was fined $25,000 by the NBA on Tuesday for tossing a pen across the court during the end of Detroit's loss to New Orleans.

Derrick Rose fined $25,000 for throwing a pen across the court into stands durin (01/14/20): Derrick Rose took out his frustrations on a poor, innocent pen

Rose hits last-second winner: 'I'm born to do this' (12/2019): Derrick Rose wasn't shying away from the type of confidence needed to drain the game-winning jumper with 0.3 seconds left in New Orleans to give the Pistons their fourth win in five games.

What to watch for when Derrick Rose and the Pistons visit the Bulls for the seco (11/2019): The Bulls won their first matchup with the Pistons at the UC on Nov. 1, but much has changed since then. Can the Bulls bounce back against a similary struggling Pistons team tonight?

'Happiness' the key for rejuvenated Derrick Rose (10/2019): The Pistons' Derrick Rose is off to one of the best starts of his career, and he says happiness is the secret.

Here’s how the Timberwolves’ Derrick Rose developed his 3-point... (11/2018): MINNEAPOLIS -- First and foremost, Rob McClanaghan wanted Derrick Rose to enjoy his summer in the gym. This was Rose’s first summer in seemingly forever where he could focus on basketball rather than rehab, but McClanaghan didn’t want to make a big deal of that.“I just wanted him to get back in...

Derrick Rose News: Superstar's Return Makes Bulls A Serious Threat in NBA Playof (04/2015): Ever since the start of the season, the Chicago Bulls were considered favorites to win the Eastern Conference title. However, it has been a rocky ride for the Bulls, who have alternately missed their key players throughout the season.

Bulls building toward playoff readiness with Derrick Rose scrimmaging (03/2015): There are myriad ways to measure the supreme confidence and optimism emanating from the Bulls these days, from Derrick Rose scrimmaging hard for a second straight day Tuesday to the depth that has developed through the various injuries to the health that appears to be taking hold for the...

Derrick Rose begins knee rehab just one day after major surgery (02/2015): The Chicago Bulls star is expected to be back playing with his team in four to six weeks.

Derrick Rose: 'No truth' to criticism of Tom Thibodeau (01/2015): Do the Chicago Bulls have problems, as Derrick Rose sees it? Yes. Is coach Tom Thibodeau the root of all that ails them? Not even close.

Derrick Rose and Joakim Noah return to lead Bulls to victory over Celtics (11/2014): BOSTON — An active Derrick Rose turned his Denver disappearance into an ancient memory, scoring 21 points in just shy of 28 minutes.

Derrick Rose exits early vs. Cavs (10/2014): Derrick Rose has a left ankle sprain and is questionable to return to Friday night's game against the Cleveland Cavaliers.

Coach K: Derrick Rose to be at Team USA Camp this summer, has chance to make tea (05/2014): It's a tough position battle at the point guard spot for Team USA, but just getting a healthy Derrick Rose on the court would be good for

Derrick Rose Injury Update: When Will The Chicago Bulls Star Return To The Court (02/2014): The second comeback for Derrick Rose appears to have a much better feel than the first one. A second knee injury in less than two years has limited the Chicago Bulls star point guard to a total of 10 games and 311 minutes played, but a new report suggests there is light at the end of the tunnel.

Derrick Rose Not Close To Practicing Yet (01/2014): Derrick Rose is jogging on the treadmill, but he won't be jogging with teammates anytime soon.

The Bulls and Their Derrick Rose Dilemma (11/2013): With Derrick Rose lost for another season, the Chicago Bulls find themselves at a crossroads and it may be wise to push the reset button.

Derrick Rose Back Attacking at Chicago Bulls Practice (09/2013): Superstar point guard Derrick Rose reported nothing but good news , after going through his first set of practices in training camp. Rose’ surgically-repaired left knee feels fine, and the guard is very much back in attack mode (and feeling quite bold.)

Derrick Rose Has Added Range According to Tom Thibodeau (08/2013): After visiting Derrick Rose in Los Angeles and observing some of his workouts, Chicago Bulls head coach Tom Thibodeau reports on the superstar point guard’s progress.

Derrick Rose believes he's still NBA's best (07/2013): Derrick Rose hasn't played in an NBA game in more than a year as he continues to recover from a torn ACL in his knee, but that hasn't sapped the confidence of the former MVP.

It's Best to Just Forgive Derrick Rose Now (05/2013): So much animosity surrounds a player who we all know will be forgiven by everyone next November. Best to forgive Derrick Rose now before you look like a hypocrite to your family, friends, coworkers, etc. Contributor: Brian Neal Published: May 27, 2013

Would Derrick Rose Return For HEAT Series? (04/2013): Would an Eastern Conference Semifinal match-up between the Miami HEAT and Chicago Bulls be enough to finally persuade Derrick Rose to return?

Quick Shots: Derrick Rose ’s return to hardwood getting overdue (03/2013): Derrick Rose blew out his knee last year when the Bulls led by 12 points with 80 seconds left. And he kept getting hurt before that when the Bulls brought him back too early. So his much-delayed return this year is understandable.

Wisch: Is Derrick Rose Happy? Bulls Can’t Take That For Granted (02/2013): The Bulls need to do all they can to ensure that home is indeed where Rose’s heart is, lest they – and the city’s hoops fans – potentially suffer the consequences.

Bulls carry on without Derrick Rose (01/2013): The talk about the return of Derrick Rose continues as the Bulls compete without him. The team has had its ups and downs as D-Rose has been working hard to recover from his ACL injury.

Notebook: Derrick Rose still 'ways away' from practice (12/2012): CHICAGO — Returning just shy of nine months after surgery to repair torn anterior and lateral cruciate ligaments, Ricky Rubio had eight points and nine assists to help lift the Timberwolves to an overtime victory over the Mavericks on Saturday.

Derrick Rose Still Keeps the Common Touch (10/2012): Derrick still feels the connection to a lot of kids in his old neighborhood and those who grew up in similar situations all over the city. Photo Credit: adidas

Joakim Noah Likes the Bulls’ Chances Even With an Injured Derrick Rose (07/2012): Just about everyone wrote off the Chicago Bulls once it became clear that Derrick Rose would likely miss most of next season. Well, everyone but Joakim Noah , it turns out.

A Sneak Peek At Derrick Rose's New Sneaker (05/2012): Long known as a “Nike” town, adidas has been making considerable inroads with the urban areas of Chicago. Photo Credit: Getty Images

The Lineup: Nike shoe designer under attack for tweeted remarks about Adidas' De (04/2012): Chicago Bulls guard lost for remainder of playoffs and the Summer Olympics with torn ACL

Derrick Rose: ‘I Want People to Think of Me as Being a Clutch Player’ (01/2012): Still reeling from the Chicago Bulls’ crushing loss in Miami on Sunday, Derrick Rose told the media in Washington last night that he planned to go “crazy” ( which he did : 35 points, 8 assists in the win), and discussed what he hopes his legacy ends up being.

Derrick Rose leads late Bulls rally over Lakers (12/2011): Derrick Rose drove the lane and lofted home a smooth floating shot for the winning points in the Chicago Bulls' opener, just in case anybody doubted the youngest MVP in NBA history can shoulder the expectations that come bundled with that shiny new trophy and a huge contract extension.

No Rose By Another Name, Only Derrick Rose (11/2011): I sat down to lunch at Pitzer last Friday and opened TSL to an article that upset my Chicago-ness.

MVP Derrick Rose willing to wait for the right labour deal (10/2011): Chicago Bulls star wishes for an NBA with no salary cap

Derrick Rose Plays Pick-Up Game Against Chinese Singer Pakho Chau (08/2011): While making his way around China on the Adidas MVP Tour , Derrick Rose decided to play a short pick-up game with a Hong Kong-based singer/songwriter named Pakho Chau ( Here's one of his songs , if you're curious).

Derrick Rose saved his best for the best defenses (07/2011): We get it, you don’t need to remind us Chicago — Derrick Rose is a stud. An MVP. One of the new faces of the game. On top of all that, last season he played his best against the best defenses in the league. Every summer over at Basketball-Reference Neil Paine does an interesting analysis…

Muller: Derrick Rose For MVP? He Has My Vote (12/2010): What makes an NBA basketball player a viable MVP candidate? This is one of the age-old questions that, quite simply, has no direct answer.