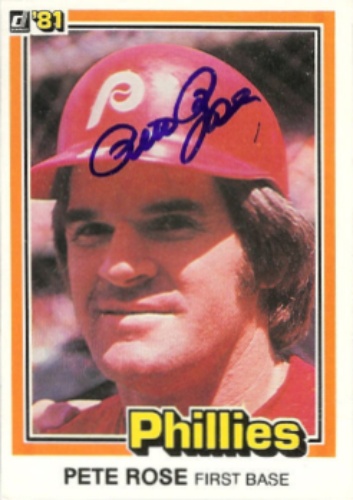 Peter Edward Rose Sr. (born April 14, 1941), also known by his nickname "Charlie Hustle", is an American former professional baseball player and manager. Rose played in Major League Baseball (MLB) from 1963 to 1986, most prominently as a member of the Cincinnati Reds team known as the Big Red Machine for their dominance of the National League in the 1970s. He also played for the Philadelphia Phillies and the Montreal Expos. During and after his playing career, he served as the manager of the Reds from 1984 to 1989. More about Pete Rose

Current items with a signature of Pete Rose

These are the most current items with a signature of Pete Rose that were listed on eBay and on other online stores - click here for more items.

Traded items with a signature of Pete Rose

If you're interested in Pete Rose Rookie cards you might want to take a look at our sister site that specializes in Baseball Rookie Cards only.

Most recently, these items with a signature of Pete Rose were sold on eBay - click here for more items.

Pete Rose Dismisses Questions About Sexual Misconduct (08/08/22): After attending an on-field celebration of the 1980 Phillies, Rose refused to answer questions about allegations from a 2017 lawsuit. “It was 55 years ago, babe.”

Rose shirks statutory rape query at Phillies fete (08/07/22): Pete Rose dismissed questions about his first appearance on the field in Philadelphia since the franchise scrapped plans in 2017 to honor him because of a woman's allegation that she had sex with baseball's hit king when she was a minor.

Phillies to include Pete Rose as part of celebration for 1980 World Series champ (07/25/22): Rose had a 2017 outing canceled after a woman testified she had a sexual relationship with him while underage

A's icon Fosse, known for Rose collision, dies (10/14/21): Ray Fosse, the catcher famous for being barreled over by Pete Rose in the 1970 All-Star Game and who went on to help the Athletics win two World Series and later became a popular broadcaster for the A's, has died.

Pete Rose on creating his new sports gambling podcast: 'I know how it looks' (10/2021): The Cincinnati Reds legend remains a polarizing figure due to an MLB lifetime ban for betting on games

Pete Rose to sell picks for baseball, other sports (04/2021): Pete Rose said Wednesday that he is joining a pick-selling website where he will make daily predictions about baseball and other sports.

Pete Rose says he still bets on MLB games: 'That's why they have casinos' (11/2020): Sports betting in America has changed a lot since Rose was caught illegally participating in it

At 49, straight from prison, Pete Rose could still hit (03/2020): Pete Rose bet on baseball. He also went to prison for tax evasion. The day he got out, he went directly to the batting cage.

Why MLB's new cheating scandal isn't a reason for Pete Rose to get a pass for st (01/2020): A reminder that there is no permanent ban in place for stealing signs

Robinson Cano’s legacy with Mariners? He did his part (12/2018): Cano more or less did his part with three All-Star appearances during his Seattle stint. The real problem was that the Mariners never went far enough to address the weaknesses of the ballclub.

MLB strikes deal with MGM as legal gambling expands in US (11/2018): NEW YORK (AP) — MGM Resorts International became Major League Baseball's official gambling partner in the U.S. and Japan, a deal made as the sport tries to ensure more prevalent

Council to MLB: Reinstate Pete Rose (03/2015): Cincinnati City Council wants to do something baseball's all-time hits leader hasn't been able to do for three decades: convince Major League Baseball to let Pete Rose back into baseball.

Mac's Layup Drill: Tiger, Pete Rose, Sacred Heart kids, and A-Rod back among us (02/2015): Tiger Woods has walked away from golf one more time. The 39-year-old took his leave after withdrawing from this weekend's tournament at Torrey Pines with back pain, that on the heels of shooting an 82 in Phoenix two weekends back....

Super Bowl 2015 ads: Skechers puts Pete Rose in the hall, but he's kicked out (01/2015): Congratulations! Your weather is set to . You can change the location at any time. Don't have an account?

Ohio judge who ruled in Pete Rose's favor retires - Quincy Herald-Whig | Illinoi (12/2014): CINCINNATI (AP) - A county judge in Cincinnati who ruled in favor of Pete Rose during the Reds star's court fight against Major League Baseball and recently ordered a fellow judge to jail is retiring after four decades on the bench.

Pete Rose receives standing ovation in Cinci (09/2014): Hits king Pete Rose got a standing ovation when he was shown on the videoboard during the seventh inning. Rose attends several games a year in his hometown. The Reds ended 44-37 at Great American Ball Park.

All the Hit King's Men and the fall of Pete Rose (06/2014): Twenty-five years ago, the Dowd Report detailed Pete Rose's gambling on baseball and led to his lifetime ban.

TIMELINE: Pete Rose's career up to 25 years ago (02/2014): A timeline of Rose's life leading up to the beginning of the end of his baseball career with a Feb. 20 meeting with Major League Baseball's commissioner to discuss allegations that Rose was betting on baseball.

Pete Rose Jr. becomes White Sox' Class A manager (01/2014): Lincoln Saltdogs' Pete Rose Jr. throws to first base during a game against the Fargo-Moorhead Redhawks Tuesday, July 27, 2004, in Fargo, N.D. Rose signed a contract with the Saltdogs, of the independent Northern League, on Tuesday.

From the archives: Pete Rose Jr. gets his shot (08/2013): Today is the 16-year anniversary of the Reds calling up Pete Rose Jr. Read all about it in our retro.Cincinnati archives.

Down On The Farm: Name strengthened Pete Rose Jr. (06/2013): First-year Voyagers' skipper draws on his vast pro experience, and his famous father.

Sweeny: Hits Record? Derek Jeter’s Slim Chance To Catch Pete Rose Is Gone (04/2013): It was nice to think about, but it’s a safe bet that Pete Rose will remain the all-time hits leader. Now you know what Rose meant when he said the first 3,000 were the easy ones.

Pete Rose: A Living Legend, Off The Record (02/2013): Gambling kept Rose out of baseball's Hall of Fame, and years later, the fallout continues. Topps baseball cards has quietly removed his name from the backs of cards that note major achievements. But is it time to re-evaluate Rose's singular status as a Major League Baseball pariah?

'Pete Rose' pulled from TLC lineup tonight (01/2013): TLC has pulled the "Pete Rose: Hits & Mrs" finale from the lineup tonight, after two weeks, and put "Cake Boss" in its place.

How Pete Rose affects alleged steroid users (12/2012): Former Reds great Pete Rose was deemed permanently ineligible by the commissioner, meaning his name has never been listed on any ballot for the Hall of Fame, an important distinction pointed out in Buster Olney's column about why Rose can't crack Cooperstown.

Rare Pete Rose item for sale (09/2012): SPORTS BLOGGERS! Pete Rose is a dude who will sign anything for money. Books, balls, bats, pictures...anything you can think of, Rose has probably signed.

Pete Rose to cut ribbon at new Columbus casino (06/2012): A former Reds great will help open a new casino in Columbus on Tuesday.

Detroit Tigers Links: Pete Rose happy he never had to face Justin Verlander (05/2012): Rose: If everybody pitched like Verlander, the batting champion would be hitting .260.

Pete Rose to Host WWE Monday Night Raw (03/2012): World Wrestling Entertainment has announced that major league baseball's hit king, Pete Rose, will be returning to the WWE to guest host the last RAW episode prior to Wrestlemania 26 on March 22, 2010, . . .

Pete Rose's old friend Tommy Gioiosa says the best revenge is success (02/2012): Tommy Gioiosa is chatting away as a breeze cuts through the Intracoastal and a full moon bounces off the water in the pool, lit in a stream of blue lights. Gioiosa is wearing jeans and a tight T-shirt, his standard business attire these days.

The Rant: Pete Rose would sell anything to make money (12/2011): Whenever Pete Rose's name stays out of the news for a few years, we begin to wonder why he isn't in the Hall of Fame. Then, to nobody's surprise, he does something stupid to remind us why he will never have a place in Cooperstown.

Chasing Pete Rose (07/2011): In case you hadn't heard, Pete Rose makes approximately 90 per cent of his post-retirement income by signing various objects at sports memorabilia shows. As a result, he doesn't just give his signature away. That would be like him giving away money.

Afternoon update: Pete Rose Jr. in Bluefield on Monday (06/2011): BLUEFIELD — When the Bristol Sox of the Appalachian League play at Bowen Field against the Bluefield Blue Jays on Monday night, people will notice the name of Bristol's new field manager for 2011.

PHOTO: Pete Rose Sporting A Pete Rose Memorial Quilt (03/2011): Via  Baseball Nation , a picture of Pete Rose at today's Reds game rocking four decades worth of fashion at all once. Get your Charlie Hustle on!

Wisch: Getting To Know The White Sox’s Pete Rose Jr. (12/2010): So, apparently, you can get a managing gig if your name is Pete Rose. Just as long as there’s a “Junior” attached to the end of it.