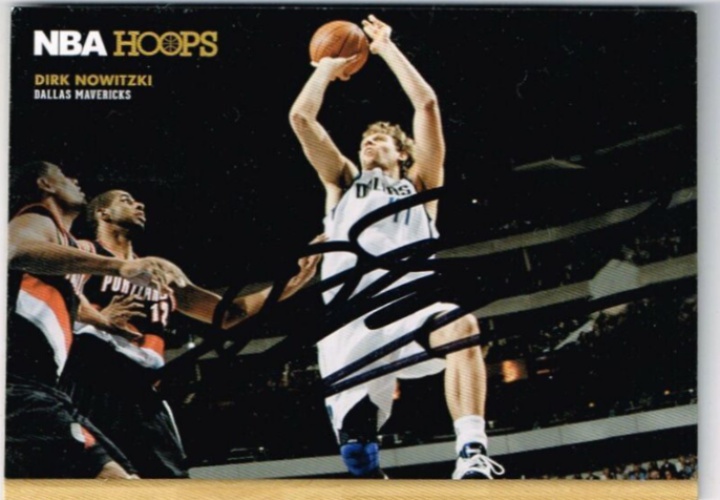 Dirk Werner Nowitzki (born June 19, 1978) is a German former professional basketball player who is a special advisor for the Dallas Mavericks of the National Basketball Association (NBA). Listed at 7 ft 0 in (2.13 m), he is widely regarded as one of the greatest power forwards of all time and is considered by many to be the greatest European player of all time. In 2021, he was selected to the NBA 75th Anniversary Team. More about Dirk Nowitzki

Current items with a signature of Dirk Nowitzki

These are the most current items with a signature of Dirk Nowitzki that were listed on eBay and on other online stores - click here for more items.

Traded items with a signature of Dirk Nowitzki

If you're interested in Dirk Nowitzki Rookie cards you might want to take a look at our sister site that specializes in Basketball Rookie Cards only.

The most expensive item with a signature of Dirk Nowitzki (Dirk Nowitzki 2019 Eminence Final MVP Diamond Signatures 2/5 Auto Autograph SJ) was sold in July 2021 for $6081.00 while the cheapest item (DIRK NOWITZKI SIGNED INDEX CARD DALLAS MAVERICKS NBA FUTURE HALL OF FAMER WORLD) found a new owner for $0.69 in December 2015. The month with the most items sold (62) was June 2011 with an average selling price of $65.49 for an autographed item of Dirk Nowitzki. Sold items reached their highest average selling price in November 2017 with $252.49 and the month that saw the lowest prices with $2.52 was October 2015. In average, an autographed item from Dirk Nowitzki is worth $69.99.

Most recently, these items with a signature of Dirk Nowitzki were sold on eBay - click here for more items.

Mavericks gift Dirk Nowitzki an awesome statue of himself for Christmas (12/25/22): The Mavericks honored Nowitzki's 21-year career in Dallas with an iconic statue.

Mavericks to unveil Dirk Nowitzki statue before Christmas game vs. Lakers (10/2022): If the statue had been anything other than his legendary one-legged fadeaway there would have been a revolt in Dallas.

Dirk Nowitzki: Kobe Bryant tried to get me to come to L.A. (04/2022): Kobe Bryant and Steve Nash were the only superstars Nowitzki singled out as names that tried to recruit him away from the Mavericks. Nowitzki instead opted to sign a four-year contract extension to remain in Dallas, though. "I remember Kobe (Bryant) ...

Dirk Nowitzki kind of regrets playing final two seasons with the Mavs (02/2022): Dirk Nowitzki has massive problems with his left ankle, which has already had to be operated on. "My foot is really bad, there are days when I don't move well at all. I'm thinking… Have the last two years (with Dallas) really been worth it? We ...

Don Nelson: I wasn’t invited to Dirk Nowitzki jersey retirement ceremony (01/2022): Don and Donnie Nelson. The general manager who acquired Nowitzki's draft rights on the night of June 24, 1998, and Don's assistant GM/son who was insistently bullish about raw 19-year-old Nowitzki's NBA potential. The question is, why weren't they ...

Daily statistical milestones: Rudy Gobert moves past Dirk Nowitzki and more (12/2021): Here's your daily recap of movements in the all-time lists for scoring, rebounds, assists, blocks, steals and three-pointers after yesterday's games. Rudy Gobert No. 52 in blocks now Moved ahead of Dirk Nowitzki with 1,286 blocks. He's now 7 away ...

Mavericks announce plans to retire Dirk Nowitzki's No. 41 jersey on Jan. 5 (11/2021): Nowitzki played 21 seasons in Dallas and is the team's all-time leader in points, rebounds and blocks

Mavericks hire franchise legend Dirk Nowitzki as special adviser to assist in se (06/2021): The Mavericks are overhauling their front office and coaching staff for next season

NBA Buy or Sell: Lakers will make a trade to improve their title odds; Cavs shou (01/2020): Also, will Luka Doncic have the better career than Dirk Nowitzki? Can the 76ers survive without making a considerable change?

Opinion: Luka Doncic more than ready to carry Dallas as Dirk Nowitzki passes bat (02/2019): The rookie sensation is on course to average 20 points, six rebounds and five assists. The only others to do that? Oscar Robertson and Michael Jordan.

Dirk Nowitzki pulls down 10,000th career rebound in win over Spurs (03/2015): Nowitzki is just the 37th player in NBA history to accomplish this.

Dirk Nowitzki dominates last 2 minutes of Mavs' win over Grizzlies (01/2015): Dirk Nowitzki scored 21 points, including the last eight for Dallas in the final 2 minutes, and the Mavericks defeated the Memphis Grizzlies 103-95 on Monday.

Dirk Nowitzki on Rick Carlisle starting him at center: ‘I thought he had a few b (12/2014): Chandler Parsons calls himself, Nowitzki and Monta Ellis ‘the least athletic front line we've ever had in the history of the NBA’

Dirk Nowitzki Stars In Rap Video With Chandler Parsons, Monta Ellis (10/2014): Dirk Nowitzki might not have many years left as an NBA star, but he could...

Dirk Nowitzki Interview (09/2014): Dirk Nowitzki calls in to the Ben and Skin Show to talk about his summer in Europe, a recent documentary film about himself, and his thoughts on the upcoming Mavericks season.

Dirk Nowitzki -- U.S. vs. Germany ... Everybody Wins! (06/2014): They say a tie is like kissing your sister -- so how do you describe Thursday's U.S. World Cup match where they lost ... but still advanced to the next round?NBA star Dirk Nowitzki called the situation "perfect" while out in New York City after the…

How Dirk Nowitzki Can Come to Life vs. Spurs (04/2014): The Mavericks and Spurs are tied at two games apiece heading back to San Antonio, but Dirk Nowitzki has yet to have a big performance for Dallas. Can he get it going and lead his team past the West's No. 1 seed? Howard Beck joins Adam Lefkoe to discuss.

NBA roundup: Dirk Nowitzki lifts Mavericks over Thunder (03/2014): Dirk Nowitzki scored seven of his 32 points in overtime, leading the Dallas Mavericks to a 128-119 victory over the Oklahoma City Thunder on Tuesday night.

Dirk Nowitzki was not a fan of this view of Kevin Love's alley-oop (12/2013): The Timberwolves' big man has the highlights to go with his gaudy numbers. Dirk Nowitzki is having such a great season, so he really didn't deserve this.

Dirk Nowitzki Jokes About Getting Schooled in His Early NBA Days (10/2013): by youtube.com/nba NBA. Check Out Dirk Nowitzki as he jokes about getting schooled and dunked on in his early days in the NBA. [PLAY VIDEO]

Dirk Nowitzki Open to Return to German National Team, Could Conclude Playing Car (09/2013): Dirk Nowitzki‘s contract expires at the end of this season, but the Mavericks star is not ready to hang up his shorts. In fact, he may already be making plans to play in 2016. Nowitzki is open to a return to the German national team for the 2016 Olympics, when he will be 38 years […]

Report: Dirk Nowitzki's wife delivers baby girl (07/2013): A German newspaper said Nowitzki and his wife Jessica had a baby girl on Wednesday, while ex-teammate Jason Terry took to Twitter to offer his congratulations.

With a baby on the way, Dirk Nowitzki also has big summer expectations for Maver (04/2013): First off, Dirk Nowitzki on Thursday confirmed that he and his wife Jessica are expecting a baby this summer, but that isn't the only news he's anticipating.

Space: The Final Frontier For Dirk Nowitzki? (01/2013): Dirk Nowitzki has done just about everything a basketball player can do: He's the the first European-born player to win the NBA's MVP award. He led the Mavericks to the NBA title. And he's an 11-time All-Star.  Next up: How 'bout a shot into space?

NBA roundup: Spurs too much for recovering Dirk Nowitzki (12/2012): Dirk Nowitzki grabbed a loose ball in the backcourt and started the fast break himself, pulling up for a three-pointer just like the days before his first knee surgery. The difference this time: The Dallas Mavericks star threw up an air ball.

Dirk Nowitzki: ‘My Knees Feel Fine … I Am Ready To Go’ (09/2012): The ’11-12 season was a bit of a rough one for Dirk Nowitzki—filled with knee injuries that held him back for much of the year—but the German big man is reportedly entirely healthy at the moment, and ready to give it another go.

Dirk Nowitzki Says He’ll Play Two More Seasons, Then ‘See How I Feel’ (08/2012): Dirk Nowitzki is 34 years old—not exactly old enough to start booking retirement vacations, but old enough to toss the idea around and begin thinking about how many more years his body can sustain a professional basketball career.

Dirk Nowitzki Gets Married in Traditional Kenyan Wedding Ceremony [PHOTOS] (07/2012): Earlier this month, Newstime Africa reported that NBA player Dirk Nowitzki of the Dallas Mavericks had married his longtime girlfriend Jessica Olssen in a traditional wedding ceremony in Kenya, which the Mavs flat out denied. More »

Dirk Nowitzki Thinks Deron Williams is 50-50 Between Dallas and Brooklyn (06/2012): Dallas or Brooklyn? Brooklyn or Dallas? At this point, it seems to be one or the other for Deron Williams, with neither side having a clear-cut advantage.

Andrew Wild: Rooting for a True Maverick: Dirk Nowitzki (05/2012): Let's appreciate Dirk for who he is and was while we can, and hope that the basketball gods smile upon him while he still has a chance to prove his might.

OKLAHOMA CITY -- Dirk Nowitzki was hoping for the same kind of friendly bounce t (04/2012): When Nowitzki didn't get it, the Dallas Mavericks could only settle for another frustratingly close loss and an uphill climb to survive in their first post-season since winning the NBA title.

Dirk Nowitzki Lost Some Motivation After Winning Championship (02/2012): Dirk Nowitzki came into the season out of shape, as he had spent the lockout partying and doing everything but playing basketball. Dirk admits that after finally winning his first NBA title, he had lost some of the motivation and fire needed to play at a high level.

Dirk Nowitzki: ‘I’ll Play for at Least Two More Years’ (01/2012): The 33-year old Nowitkzi can see himself playing in the NBA for a couple of more seasons, at least, before transitioning into what he envisions as a teaching role in the game of basketball.

You Need To Watch This Crazy German ING Commercial Where Dirk Nowitzki Eats A Bu (12/2011): The National Basketball Association (NBA) is the major professional basketball league in North America. The league consists of thirty teams, divided into six divisions in two conferences. Twenty-nine clubs are located in the...

Dirk Nowitzki Hopes To Sign In Europe ‘Soon’ (11/2011): The 33-year-old says he’s not in “basketball shape” right now, but Dirk Nowitzki says he will be looking for a team in Europe “soon.”

Dirk Nowitzki: The Most Marketable Player in the NBA (07/2011): Traditionally, when it comes to moving merchandise, the League’s big men have always been overshadowed by the flash and athleticism of the little guys. The sun rises in the East, sets in the West, and big guys can’t sell shoes.

Dirk Nowitzki says Game 4 will be decided by the X-Factor (04/2011): The Mavericks are hoping that a workout at the Nike world headquarters will help them get off on the right foot when they take the floor for game four Saturday afternoon.

Dirk Nowitzki Thinking of Sitting Out the All-Star Game? (01/2011): With the goal being to be as healthy as possible come Playoff time, Nowitzki wouldn’t mind not making the trip to L.A next month. From ESPN : “The face of the Dallas Mavericks’ franchise is in the midst of what might be the most efficient offensive season of his surefire Hall of Fame career.