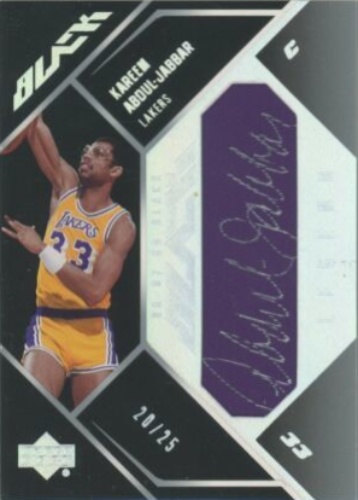 Kareem Abdul-Jabbar (born Ferdinand Lewis Alcindor Jr.; April 16, 1947) is an American former professional basketball player who played 20 seasons in the National Basketball Association (NBA) for the Milwaukee Bucks and the Los Angeles Lakers. During his career as a center, Abdul-Jabbar was a record six-time NBA Most Valuable Player (MVP), a record 19-time NBA All-Star, a 15-time All-NBA Team member, and an 11-time NBA All-Defensive Team member. He was a member of six NBA championship teams as a player and two more as an assistant coach, and was twice voted NBA Finals MVP. He was named to three NBA anniversary teams (35th, 50th, and 75th). Widely regarded as one of the greatest players of all time, often named a top 3 player in NBA history, he was called the greatest basketball player of all time by Pat Riley, Isiah Thomas, and Julius Erving. More about Kareem Abdul-Jabbar

Current items with a signature of Kareem Abdul-Jabbar

These are the most current items with a signature of Kareem Abdul-Jabbar that were listed on eBay and on other online stores - click here for more items.

Traded items with a signature of Kareem Abdul-Jabbar

If you're interested in Kareem Abdul-Jabbar Rookie cards you might want to take a look at our sister site that specializes in Basketball Rookie Cards only.

Most recently, these items with a signature of Kareem Abdul-Jabbar were sold on eBay - click here for more items.

The seven men who've held the NBA's all-time scoring record (01/23/23): Kareem Abdul-Jabbar is the name James is chasing, but the previous record holders include Hall of Famers Wilt Chamberlain and Bob Pettit.

Adam Silver: LeBron James’ scoring record to be broadcast globally (01/2023): People across the world will get to see LeBron James surpass Kareem Abdul-Jabbar as the NBA's all-time leading scorer whenever it happens.

Boston Celtics legend Bill Russell: Answer the Call (10/2022): To celebrate his life and legacy, a panel that includes Adam Silver, Kareem Abdul-Jabbar, Paul Pierce, and many others put together a video for TNT.

Kareem will start podcast where he will interview former teammates (08/2022): Kareem Abdul-Jabbar, the centerpiece of the Showtime Lakers, will launch a podcast full of informative interviews with his former teammates.

They said it!: Stephen Curry lets everyone know where they stand and more Quotes (06/2022): Kareem Abdul-Jabbar puts his career in perspective, Kevin Durant takes issue with Charles Barkley, and a few people think Gronk might come back.

Reggie Bullock named NBA’s 2022 Kareem Abdul-Jabbar Social Justice Champion (05/2022): Bullock has been active in the fight for increased visibility and acceptance for the LGBTQ+ community.

LeBron James on passing Karl Malone on all-time scoring list: ‘I’m just always l (03/2022): Saturday in Washington, it was a thundering dunk, a driving layup, a handful of threes and, finally, a cutting layup that pushed James up the NBA's all-time scoring leaderboard to No. 2, trailing only Kareem Abdul-Jabbar. The historic basket came ...

Kareem Abdul-Jabbar: John Stockton’s statements making athletes look like dumb j (01/2022): According to Abdul-Jabbar, such comments damage professional athletes' reputations. "I think statements like that make the public look upon athletes basically as dumb jocks, for trying to explain away something that is obviously a pandemic." "It ...

Kareem Abdul-Jabbar on LeBron James potentially breaking his scoring record: 'I' (09/2021): LeBron is 3,020 points behind Abdul-Jabbar on the NBA's all-time scoring list

NBA announces new award named after Kareem Abdul-Jabbar (05/2021): Each player will nominate someone for this social justice award

Abdul-Jabbar urges public to get COVID vaccine (01/2021): Kareem Abdul-Jabbar has revealed that he received the COVID-19 vaccine and is encouraging others to consider doing the same.

NBA All-Hyphen Team: From greats like Kareem Abdul-Jabbar to budding stars like (05/2020): We put together an all-time NBA team using only players with hyphenated names

Coronavirus: Kareem Abdul-Jabbar donates 900 pairs of safety goggles to alma mat (04/2020): Kareem is giving his famous equipment to those who need it most

Erickson, ex-GM who drafted Kareem, dies at 92 (03/2020): John Erickson, a former Bucks general manager and Wisconsin men's basketball coach who drafted Kareem Abdul-Jabbar in 1969 during a two-year tenure in Milwaukee, has died. He was 92.

Danny Green drops 28 points, passes Kareem Abdul-Jabbar for most ever in a Laker (10/2019): While they fell to the Clippers to kick off the season, Danny Green didn’t waste any time in his Lakers debut.

Kareem Abdul-Jabbar: Indiana Is on the Wrong Side of History (03/2015): The state took a step toward establishing an American version of Sharia law

Kareem Abdul-Jabbar timeline (02/2015): Highlights in the life and career of an NBA legend on and off the court.

Kareem Abdul-Jabbar: Colleges Need to Stop Protecting Sexual Predators (01/2015): We need to reexamine the culture on campus—especially among student athletes

Kareem Abdul-Jabbar: Don't Let NYPD Shootings Cloud Issue of Institutionalized R (12/2014): The former NBA star says the larger movement is in danger of being clouded by the actions of one man unaffiliated with the protests.

Kareem Abdul-Jabbar: White People Feel Targeted by the Ferguson Protests—Welcome (11/2014): White Americans feel like they are being singled out because of the color of their skin rather than any actions they’ve taken. That's how black people feel. Every. Single. Day.

Kareem Abdul-Jabbar: America’s Dark Obsession With Vigilante Justice (08/2014): Our belief that the government wants to help us achieve fairness is lower than ever—leading to fantasies of lawless revenge

Kareem Abdul-Jabbar Sues Auction House to Get Bruce Lee Poster Back (07/2014): Basketball legend Kareem Abdul-Jabbar is suing a Beverly Hills auction house to get some prized possessions back, claiming they're holding his property "hostage."

Kareem Abdul-Jabbar: Soccer Will Never Be a Slam Dunk in America (06/2014): Soccer doesn’t express the American ethos as powerfully as our other popular sports: We are a country of pioneers, and we like to see extraordinary effort rewarded... with points.

Kareem Abdul-Jabbar: Let Motown Be Your Commencement Speaker (05/2014): Forget all the controversies. Let Marvin Gaye and the other greats be your true guide to life with Kareem's commencement mix tape.

Kareem Abdul-Jabbar: Sterling GF, Media ‘Caught’ Him (04/2014): Former Los Angeles Lakers star and former Clippers assistant, Kareem Abdul-Jabbar, wrote an op-ed column for Time.com about his take on the Donald Sterling scandal. Abdul-Jabbar said while Clippers owner Sterling – who was banned from the NBA for life …

Building a Ph+ CML game plan: Kareem Abdul-Jabbar explains how he manages his le (08/2013): 1Keep it Clean. Please avoid obscene, vulgar, lewd, racist or sexually-oriented language. 2Don't Threaten or Abuse. Threats of harming another person will not be tolerated. AND PLEASE TURN OFF CAPS LOCK.

Kareem Abdul-Jabbar on life beyond the court (06/2013): The NBA legend and leukemia survivor goes beyond the stats to inspire others

Girls Slammed by Kareem Abdul-Jabbar: "They're All Educated but Fatally Ignorant (01/2013): Lena Dunham, be forewarned. Kareem Abdul-Jabbar is watching. The NBA Hall of Famer and apparent avid TV watcher took to Huffington Post today to detail what he believes to be the...

When it comes to treating his CML, Kareem Abdul-Jabbar shoots and scores (12/2012): Welcome to the discussion. Current users sign in here. If you do not have an account, set one up ! It's easy to do and it's free!

Joakim Noah Trained With Kareem Abdul-Jabbar This Summer (09/2012): Kudos to Joakim Noah for taking this important step, and getting tutelage from one of the best to ever do it. Here’s to hoping there’s extensive footage of Kareem trying to teach Joakim the sky hook.

In the robotics house: Kareem Abdul-Jabbar (04/2012): LOOKING UP • Kareem Abdul-Jabbar, the NBA's all-time leading scorer, is visiting the FIRST Championship this weekend at the Edward Jones Dome with Dean Kamen, founder of the not-for-profit organization.

Kareem Abdul-Jabbar Wrote a Children’s Book (03/2012): The legenday ballplayer has written a children’s book that gives shine to African-American innovators. Per the NY Daily News : “What do the inventor of the potato chip, open-heart surgery and the induction telegraph have in common? They were all African-Americans.

Kareem Abdul-Jabbar Signs His Book at ESPN Zone (02/2012): In addition to making movies, giving inspirational speeches to various groups all across the globe, and serving as a U.S. cultural ambassador, Kareem Abdul-Jabbar is also the author of eight best-selling books, the newest of which he'll be signing this Thursday at ESPN Zone.

Trail Blazers history: Kareem Abdul-Jabbar scores 30,000th point at Memorial Col (11/2011): The Hall of Fame center finished his NBA career as one of four players to score at least 30,000 points and he reached the milestone in Portland at the Memorial Coliseum.

WATCH: Kareem Abdul-Jabbar Stars In An Early Apple PowerBook Commercial (09/2011): With all the obsession over which new devices are coming out tomorrow, next month, and next year, we thought it'd be nice to take a quick look backwards.

Why Kareem Abdul-Jabbar Deserves A Statute...And Our Respect (05/2011): Earlier this week I opened my twitter account and I was surprised to find unusual tweets from the account @kaj33, which belongs to NBA Hall of Famer Kareem Abdul-Jabar.

Kareem Abdul-Jabbar Discusses His Film (03/2011): The Hall of Famer on his film, Carmelo and his role in NBA history.