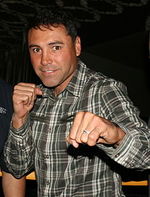 Oscar De La Hoya (/deɪləˈhɔɪ.ə/; born February 4, 1973), is an American former professional boxer who, in 2002, also became a boxing promoter and, in 2018, a mixed martial arts (MMA) promoter. As a boxer, he competed from 1992 to 2008, winning 11 world titles in six weight classes, including the lineal championship in three weight classes. He is ranked as the 13th best boxer of all time, pound for pound, by BoxRec. De La Hoya was nicknamed "The Golden Boy of boxing" by the media when he represented the United States at the 1992 Summer Olympics where, shortly after having graduated from James A. Garfield High School, he won a gold medal in the lightweight division, and reportedly "set a sport back on its feet." More about Oscar De La Hoya

Current items with a signature of Oscar De La Hoya

These are the most current items with a signature of Oscar De La Hoya that were listed on eBay and on other online stores - click here for more items.

Traded items with a signature of Oscar De La Hoya

Most recently, these items with a signature of Oscar De La Hoya were sold on eBay - click here for more items.

De La Hoya on GGG vs Golovkin trilogy, Anthony Joshua, and MMA aims (12/12/18): Oscar de la Hoya shared his views on a number of topics at the top of the boxing and MMA agenda. He thinks fans will still want to see a Gennady Golovkin vs Canelo Alvarez trilogy.

De La Hoya Reacts To Dana White Calling Him A Coke Head (12/11/18): Golden Boy Promotions head honcho Oscar De La Hoya and UFC boss Dana White continue to go out one another in the media. Recently White blasted De La Hoya for alleged drug use and for putting on an …

Oscar De La Hoya: ‘As long as Dana White’s not paying his fighters, I’m going to (12/11/18): The former world champion boxer and head of Golden Boy Promotions isn’t about to step away from the MMA world, even after what’s reported to have been a much less successful than hoped for debut event.

Bob Arum and Oscar de la Hoya to meet next week to talk co-promotions (08/2014): At today’s Pacquiao-Alegeri press tour at AT&T park in San Francisco to promote the November 22nd fight in Macau, China…the head honcho at Top Rank got a call from The Golden Boy in Philadelphia to move forward and co-promote.

EPIX Captures Oscar De La Hoya as He Defines Himself, Life In and Out of the Rin (07/2014): EPIX, the premium entertainment network, announced today that boxing great and entrepreneur Oscar De La Hoya will be the next guest on Personal with Bill Rhoden, the network’s special interview series hosted by the award-winning sports journalist with The New York Times.

Oscar De La Hoya Tweet Indicates Fissure within Golden Boy Foundation | BoxingIn (03/2014): It’s now clear that there are earthquake tremors shaking the executive offices of Golden Boy Promotions, the world’s largest, most important boxing promotional company. How high these tremors rank on the Richter Scale it’s too soon to say. But a temblor has indeed struck.

Hispanic Heritage Month: Oscar De La Hoya (09/2013): The Golden Boy of boxing, Oscar De La Hoya, became a household name in 1992 after his gold winning knockout. But the California-born Latino had boxing in his blood long before the world took notice. …

Model / Escort Swings and Misses – Again – at Oscar De La Hoya (05/2013): It appears that Angelica Cecora again threw her best roundhouse punch at former world champion Oscar De La Hoya and missed the mark completely. And then she found herself on the receiving end of a counterpunch.

Media Interview w/ Oscar De La Hoya, Jesus Soto Karass, Marcos Maidana, Ponce De (11/2012): Oscar De La Hoya It’s a pleasure to be introducing to you Knockout Kings on Mexican Independence Day, which will be a quadruple header. The main event Canelo Alvarez vs. Josesito Lopez and that will be for the WBC Super Welterweight title.

Oscar De La Hoya dismisses comeback talk (10/2012): Former boxing champ-turned entertainer and promoter Oscar De La Hoya has assured fans he has no plans of returning to the ring as a fighter after sharing photos of a training session via Twitter.com on Tuesday (30Oct12).

Oscar De La Hoya battles drug demons day by day (05/2012): I first met Oscar De La Hoya in the spring of 1992 in Tampa. He was sharp, good-looking and the best amateur boxer in the United States back then, prepping for the Summer Olympics in Barcelona.

Oscar De La Hoya pushes for dismissal of sex suit (01/2012): New York, Jan 28 (ANI): Oscar De La Hoya, who has been accused of assaulting 25-year-old model Angelica Marie Cecora, has pushed for dismissal of the case over her comments that she wanted to continue working with the boxing champ after their alleged drug-fueled sex romp.

Oscar De La Hoya Visits FOX 5 (12/2011): It’s one of the biggest fights in Washington D.C. in decades, and it all goes down Saturday night at the Convention Center. Amir Khan takes on D.C.'s own Lamont Peterson, and the promoter of that fight is none other than boxing legend Oscar De La Hoya!

Was Oscar De La Hoya Just “Joking” About a Comeback? | BoxingInsider.com - Boxin (10/2011): Several months back I was sitting with a financial backer and we were talking to one of Floyd Mayweather’s representatives, on behalf of a certain fighter, in support of a deal to fight Floyd in what would be his first bout in sixteen months.

Oscar De La Hoya Enters Rehab, Admits 'Flaws' (06/2011): The boxing legend is receiving the necessary treatment for substance abuse and is asking for respect and privacy.

Oscar De La Hoya to Visit U.S. Troops and Teach Them Boxing (02/2011): Together with Adrien Broner, Daniel Jacobs and Seth Mitchell, the boxing champion would go to Middle East and teach the soldiers how to fight inside the ring.