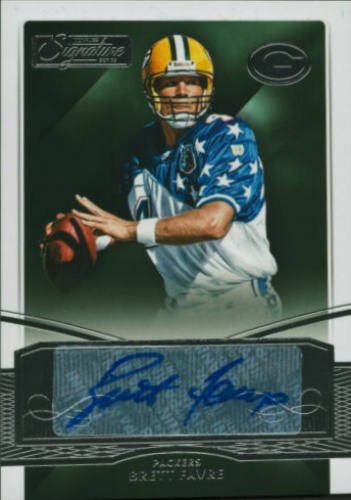 Brett Lorenzo Favre (/ˈfɑːrv/ (listen); FARV; born October 10, 1969) is a former American football quarterback who played in the National Football League (NFL) for 20 seasons, primarily with the Green Bay Packers. Favre had 321 consecutive starts from 1992 to 2010, including 297 regular season games, the most in league history. He was also the first NFL quarterback to obtain 70,000 yards, 10,000 passes, 6,000 completions, 500 touchdowns, 200 wins, and victories over all 32 teams. More about Brett Favre

Current items with a signature of Brett Favre

These are the most current items with a signature of Brett Favre that were listed on eBay and on other online stores - click here for more items.

Traded items with a signature of Brett Favre

If you're interested in Brett Favre Rookie cards you might want to take a look at our sister site that specializes in Football Rookie Cards only.

Most recently, these items with a signature of Brett Favre were sold on eBay - click here for more items.

Brett Favre scandal explained: Ex-NFL QB is accused of misusing of Mississippi s (11/29/22): Favre's potential involvement is part of an investigation into the largest corruption case in Mississippi state history

Brett Favre's lawyers file motion to dismiss lawsuit against him in Mississippi (11/29/22): The Hall of Famer has been embroiled in the welfare funds case for months

Report: Brett Favre backed concussion drug companies that overstated effectivene (11/08/22): Favre reportedly helped the drug companies get funding from the pool of misappropriated grant money that was supposed to be used to help Mississippi welfare families.

Brett Favre breaks silence on alleged involvement in Mississippi welfare scandal (10/11/22): Favre has been accused of using welfare funds to assist in the building of a volleyball facility at Southern Miss.

Brett Favre's involvement in welfare scandal draws outrage and indifference in M (10/07/22): Bring up Favre and misspent welfare funds in Mississippi, and there are long faces and short answers.

Brett Favre is the face of Mississippi welfare scandal, but it's bigger than him (10/2022): He's in a hole of his own digging. Yet Favre is only the latest individual who won't pay for something with their own money if the public's money is available, especially if it involves funds meant for the most vulnerable.

Mississippi welfare fraud defendant claims former governor Phil Bryant ordered $ (07/2022): Hall of Fame quarterback Brett Favre continues to find himself in the middle of a massive Mississippi fraud case. According to the Associated Press, one of the persons who pleaded guilty to criminal charges arising from a multi-million-dollar scam claimed in a court filing that she paid $1.1 million

Brett Favre, others sued by Mississippi Department of Human Services in welfare (05/2022): Favre has repaid the misplaced funds he was given, but the state auditor is still asking for an additional $228,000 in interest on the original sum

The greatest draft day photo in history (04/2022): Forget the boring green-room shots of NFL prospects in fancy suits. Here's the story behind the hilarious and iconic image of Brett Favre in jorts on his bed.

Brett Favre explains how Mac Jones is 'young carbon copy' of Tom Brady (11/2021): The comparisons between Mac Jones and Tom Brady won't stop, and one Hall of Fame quarterback has weighed in on the discussion with an interesting take.

Brett Favre issues warning to Patrick Mahomes after landing in concussion protoc (01/2021): Favre knows from experience the dangers that Mahomes may be weighing

How should the Eagles approach Carson Wentz? Think Brett Favre (12/2020): Given the QB's cap hit and low market value, a former NFL executive says the Eagles should be focused on restoring his old form, not trade partners.

Russell Wilson joins Brett Favre and Drew Brees as only three quarterbacks to ac (11/2020): The Seahawks quarterback made a bit of history in Thursday's win

Chiefs coach Andy Reid reveals the one big thing Patrick Mahomes has in common w (09/2020): The Chiefs quarterback apparently has one big thing in common with the Pro Football Hall of Famer

'Hard Knocks' Power Rankings: Brett Favre, Tyrod Taylor and padded practices fil (08/2020): We also get our first look at a drill sergeant on the Chargers staff!

Brett Favre says Packers should use Jordan Love like the Saints use Taysom Hill (06/2020): Favre thinks Green Bay needs to be flexible with its first-round pick

Brett Favre's quarantine fun: TikTok videos and (orange) hair dye (04/2020): Yes, that was orange hair that the Hall of Fame quarterback revealed during an interview. “Consider this quarantine Week 4.”

Super Bowl 2020: Is Patrick Mahomes the next Brett Favre? Packers legend sees th (01/2020): Favre chimes in on the similarities between himself and the Chiefs quarterback

Michigan State lives on the edge with Denzel Valentine, 'the Brett Favre of bask (03/2015): Valentine leads Michigan State in turnovers but also finished No. 6 in the Big Ten in assists per game.

Is the compromise to show Brett Favre’s Packers Hall of Fame induction to fans o (02/2015): Today's Paper, also known as the e-Edition, is an online replica of the printed newspaper. You can view today's paper or previous issues. Not a Subscriber?

Brett Favre: 'I admit I was wrong for retiring early' (01/2015): In interview on "In Depth with Graham Bensinger" airing this weekend, former NFL quarterback Brett Favre said he should not have retired early in 2008.

Recent Wisconsin player knows who should be the Badgers’ next coach: Brett Favre (12/2014): It's not going to happen, but admit it: Aren't you intrigued?

Wait, Brett Favre was ‘always perfectly groomed’? (09/2014): So the quarterback says in a commercial, but the historical record begs to differ.

Brett Favre Is Playing Football Again, This Time It's on Sqor (08/2014): Sqor has much to celebrate this week: Launching their Android app, hitting 1 million pageviews year-to-date, and releasing their interactive football "Showdowns."

Brett Favre shows off bulging muscles again (05/2014): Danielle Haynes HATTIESBURG, Miss., May 29 (UPI) -- Brett Favre offers pair of signed headphones to fan who has best suggestion of who can beat him at arm wrestling.

Preparing for NFL draft, QB Bryn Renner sticks to following Brett Favre (04/2014): No, he won’t be going on Day 1 or 2 of the NFL draft, but the North Carolina quarterback is a developmental option for Green Bay.

Johnny Manziel reminds Brett Favre of himself (02/2014): “I almost thought I was watching film of a young Brett Favre,” Favre told USA Today. “I didn’t think I did a lot of things well (at Southern Mississippi), but he did.”

Brett Favre: 'Peyton's the closest to me' (01/2014): Evan Bleier EAST RUTHERFORD, N.J., Jan. 31 (UPI) -- Brett Favre says that if Broncos quarterback Peyton Manning loses the Super Bowl on Sunday, "it's foolish to say his legacy will be affected at all."

Breaking Madden: Brett Favre returns to the Rams, and brings Quincy Carter and f (10/2013): Favre, understandably, wants to get on with his life and would rather not subject himself to another year of being attacked by giant men. So this is what we're going to do.

Brett Favre ‘Could Play’ In The NFL Today, Agent Says (09/2013): Favre isn't about to make another comeback. Be he could if he wanted to, Favre's agent, Bus Cook, said during a speaking engagement this week in Alabama.

Brett Favre transitions from pitching TDs to pitchman for pain cream (06/2013): Brett Favre made his name on the football field, showing up for every game, slinging passes and throwing the occasional block for his running backs. As the Hall of Fame beckons, Favre appears to have taken on a new career: infomercial pitchman.

Quarterbacks Traded for First Round Picks: From Brett Favre to John Hadl, With P (04/2013): A list that will live in infamy.

Brett Favre documentary to screen close to home (02/2013): The wounds haven't completely healed yet for some.

Brett Favre joins NFL Network for Super Bowl XLVII (01/2013): Given the number of times he retired -- and unretired -- from football, you knew that Brett Favre couldn't really stay away from the NFL. For this weekend, at least, he is returning to the game he walked away from after the 2010 season. Read full article >>

East Carolina QB Shane Carden bares a striking resemblance to Brett Favre (12/2012): Like Favre in his sophomore season at Southern Mississippi, Carden has led Pirates to a bowl game as a sophomore

From Brett Favre to Jeffrey Dahmer, the Driftless Film Festival has a Wisconsin (10/2012): Think of this movie as a chance for divorce

Brett Favre's high school team loses on miracle TD pass (09/2012): Brett Favre produced his share of late-game heroics in the NFL. So it might be fitting that his first loss as a high school coach came on a play that Favre pulled off so many times.

Brett Favre's personal life in spotlight (08/2012): Brett Favre shouldn't have to respond to embarrassing claims about his personal life that two massage therapists are making in a lawsuit, his lawyers say.

Brett Favre holds second annual passing camp in Hattiesburg (06/2012): The "Ole Gun Slinger" himself, old Nike golf cap and all, hovered around the sidelines throughout the morning to see what the players produced

Winning Bid for Brett Favre’s Charity Auction Falls Short of Estimates (05/2012): The enthusiasm over bringing Brett Favre back onto the field seems to fall short, at least of the expected value of $10,000.

Express Offers Contract To Brett Favre (01/2012): The Council Bluffs Express have formerly submitted a contract offer to retired NFL Quarterback Brett Favre. The indoor professional football team hopes the “gunslinger” can be ready to play by Opening Night on March 31 when they travel to Tulsa to take on the Oklahoma Defenders.

Fantasy football: Brett Favre to Bears just talk, thankfully (12/2011): and#61479;We almost made it, my friends. We almost got through an entire NFL season without having to think about Brett Favre.

Opinion: Urban Meyer is the new Brett Favre (11/2011): Peter Schrager is a frequent contributor to NFL and college football coverage on FOXSports.com. Feel free to e-mail him at peterschrager@gmail.com , or follow him on Twitter.

Brett Favre will help call Southern Miss game (09/2011): Despite constant rumors that various quarterback-needy NFL teams have inquired about Brett Favre's services, his playing career hasn't been revived. But that doesn't mean he's done with football. Favre will serve as a...

Brett Favre's Playing Days are Over, But He Still Enjoys Being Around Football (06/2011): Brett Favre says while his playing days are definitely over, he hasn't decided what he's going to do with himself in the coming years...

Brett Favre Throws Out First Pitch At C-USA Tourney (05/2011): Southern Miss and NFL legend Brett Favre made a special guest appearance at the Conference USA Tournament in Pearl Wednesday night to throw out the first pitch before the USM versus Tulane game.

Brett Favre lewd photo scandal embarrassment (04/2011): The woman at the center of a tawdry scandal involving retired National Football League (NFL) quarterback Brett Favre says she never intended to be a "gold-digger" and just wants her life back, according to an interview on ABC News.

Brett Favre rumours starting earlier this year (03/2011): I just threw up a little.