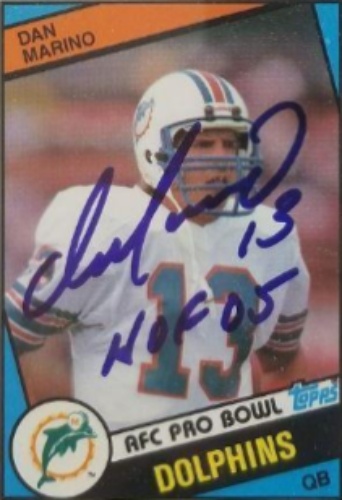 Daniel Constantine Marino Jr. (born September 15, 1961) is an American former football quarterback who played in the National Football League (NFL) for 17 seasons with the Miami Dolphins. After a successful college career at Pittsburgh and being named First-team All-American in 1981, Marino was the last quarterback taken in the first round of the quarterback class of 1983. Marino held or currently holds dozens of NFL records associated with the quarterback position, and despite never being on a Super Bowl-winning team, he is recognized among the greatest quarterbacks in American football history. More about Dan Marino

Current items with a signature of Dan Marino

These are the most current items with a signature of Dan Marino that were listed on eBay and on other online stores - click here for more items.

Traded items with a signature of Dan Marino

If you're interested in Dan Marino Rookie cards you might want to take a look at our sister site that specializes in Football Rookie Cards only.

Most recently, these items with a signature of Dan Marino were sold on eBay - click here for more items.

Matt Ryan says he’s proud to be mentioned with Dan Marino after passing him on y (10/17/22): Colts quarterback Matt Ryan passed for 389 yards on Sunday, and that put him ahead of Dan Marino on the all-time passing yardage list. That meant a lot to Ryan. “I’m proud of that,” Ryan said. “I’ve gotten to know Dan since I got into the league back in 2008 and I love him. He’s [more]

Dolphins legend Dan Marino wonders if he could have won a Super Bowl if he had l (09/16/22): Marino doesn't regret his decision to remain a Dolphin, but does think about what could have been

Skylar Thompson is really looking forward to working with Dan Marino (05/14/22): He has the right attitude.

Steelers pick Kenny Pickett 39 years after passing on Pitt QB Dan Marino (04/29/22): Kenny Pickett didn’t need a private jet or any other mode of transportation to get from his college training facility to his new NFL training facility. He simply walked to the other side of the UPMC Rooney Sports Complex the Steelers share with the Pitt football program. “It’s special. It’s really s

Ravens' Wink Martindale describes Josh Allen as a young Ben Roethlisberger with (01/2021): Baltimore's defensive coordinator understands the challenge he's up against this weekend

Dolphins Franchise Five: Don Shula, Dan Marino lead the way on Miami's list of l (06/2020): The Dolphins have been spoiled with talented players -- and an all-time coach -- during their 50-plus years

Is Tua Tagovailoa ready to become Miami's biggest star since Dan Marino? (05/2020): Former Miami athletes Dwyane Wade, Ricky Williams and Joe Rose weigh in on the rookie quarterback's arrival that is being defined by hope and hype.

Bills Hall of Famer Jim Kelly: AFC QBs remind me of when I played (04/2020): The Buffalo legend says Patrick Mahomes and Lamar Jackson evoke memories of his heyday, which included greats like John Elway and Dan Marino.

Dolphins happily draft QB of future in Kiper's latest mock (03/2020): Dan Marino and Ryan Tannehill are the only QBs Miami has taken in Round 1 since 1979. That could change this year.

It's The 20th Anniversary Of Dan Marino's Fake Spike (11/2014): The original and still the best. This is video of the Dolphins' entire game-winning drive, but the clock play itself comes at about the five-minute mark—the video should be cued up. Read more...

Hall of Famer Dan Marino working with Dolphins quarterbacks (10/2014): The legendary quarterback the Miami Dolphins have struggled to replace for nearly two decades has decided to lend a hand with the development of his successors.

Dan Marino's "earthquake": Why Hall of Fame QB reversed course on lawsuit vs. th (06/2014): Marino's notoriety as a former star player, NFL analyst and pitchman for products such as NutriSystem and Papa John's may have made his role as the "face" of the lawsuit untenable.

Hall of Fame QB Dan Marino's draft scouting report: Manziel 'competitor', Bridge (04/2014): It's less than two weeks until the 2014 NFL Draft. There have been lots of rumors, plenty of speculation and smokescreens sent out from around the country, trying to keep draft plans hidden.

Dan Marino Threw Out Marlins Ceremonial First Pitch, Was Just a Bit Outside (03/2014): Not bad.

David Moulton: Time for Dan Marino to give running the Miami Dolphins another sh (11/2013): The Miami Dolphins are a mess. Among many issues, they are just not very likable. On or off the field. They are not winning enough to appease their fans, and now the Jonathan Martin saga is beyond embarrassing.

Varsity Xtra: Quarterback Dan Marino was known for his arm, but, boy, could he r (09/2013): It was Marino's legs that helped make him a legendary high school football player -- and athlete -- at Central Catholic High School.

Pittsburgh native Dan Marino still rooted in hometown (08/2013): Pizza may have been what brought Dan Marino back to his hometown Thursday, but the Hall of Fame quarterback couldn't help but talk a little pigskin.

Dan Marino Foundation: Help fund autism research (05/2013): WEST PALM BEACH, Fla. -- If you eat out a lot we have a great way for you to save some money and help an important cause here in South Florida.      The Dan Marino Foundation, which helps the families of autistic children, is partnering with restaurant. ...

Dave Hyde: 30 years ago, good fortune, and Dan Marino, fell to the Dolphins (04/2013): FORT LAUDERDALE, Fla. — Dan Marino remembers feeling surprised, then confused. He remembers thinking he’d be drafted high — “Maybe in the top five picks,” he says — then sitting on the couch in his Pittsburgh home as those first five teams passed on him.

New Dolphins Logo: Dan Marino Gives Logo Twitter Approval, as Miami Sign Vaughn (03/2013): The new Dolphins logo has been unveiled as the Miami NFL team undertakes what it has called a month long roll out of its new identity.

Dan Marino hid love child from bosses at CBS Sports - and even lawyer-agent - fo (01/2013): Now that’s a misdirection play! Desperate to keep his clean-cut all-American image intact, Dan Marino told no one but his wife that he had sired a baby with a co-worker, paying the mistress hush money and keeping his CBS Sports bosses — and even his longtime lawyer-agent — in the dark...

NFL Legend Dan Marino Breaks Down Steelers/Bengals (12/2012): Legendary NFL quarterback and "The NFL Today" analyst Dan Marino joined The Fan Morning Show on Friday to share his thoughts on Sunday's huge matchup between the Bengals and the Steelers at Heinz Field (1:00 p.m., KDKA-TV).

Not even Dan Marino or Bob Griese managed to start the opener as a rookie (08/2012): Dan Marino couldn’t do it. Neither could fellow Hall of Famer Bob Griese. Ditto for David Woodley, the phenom of 1980, and George Wilson Jr.

$50K grant to help the Dan Marino Foundation (07/2012): Focus on people's capabilities, not their disabilities.

HOF QB Dan Marino Returns To Pittsburgh For Regatta, Talks Steelers (06/2012): Hall of Fame quarterback Dan Marino joined the guys on The Fan Morning Show Friday morning to talk about the Steelers and his return to Pittsburgh for the EQT Pittsburgh Three Rivers Regatta.

Fit at 50 with Dan Marino (04/2012): Join us with a live interview one of football's greatest quarterbacks, Dan Marino talking about staying fit at 50.

Hall of Famer Dan Marino: Manning 'fits with anybody' (03/2012): If Peyton Manning wants to talk about playing quarterback for the Miami Dolphins, Dan Marino would be thrilled to take his call.

Dan Marino autism walk raises $700,000 | Video (01/2012): More than 17,000 people attended the event at SunLife Stadium MIAMI GARDENS — Dan Marino lends his name to many things, but when he talks about his foundation's WalkAbout Autism, Marino speaks with an unparalleled passion.

Dan Marino Congratulates Drew Brees via Twitter for Breaking his Passing Record (12/2011): On the last Monday Night Football game in 2011, Drew Brees broke the single-season record for most passing yards in a single season. Dan Marino, the former record holder, congratulated the Saints QB via Twitter.

Dan Marino Loves The Patriots-Steelers Matchups (10/2011): Pro Football Hall of Famer Dan Marino drops by for a surprise visit with Vinnie & Cook on Sportsradio 93-7 The Fan!

CAPTION CONTEST: Dan Marino wants your lines (07/2011): On his Twitter account, Dan Marino had a caption contest that awarded an autographed ball. Unfortunately, the contest just ended - what, you expect timeliness in my blog? But just because there's no reward doesn't mean some fun can't be had.

HOUSE OF THE DAY: Dan Marino Finally Sold His Florida Estate At A 55% Markdown (02/2011): Marino's home in the Windmill Estates Ranch went on the market all the way back in 2005 for $15.9 million. After dropping the price several times, Marino finally accepted $7.2 million for the 19,500 square foot estate.