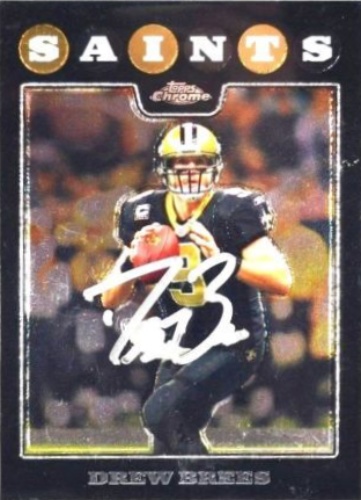 Drew Christopher Brees (/briːz/; born January 15, 1979) is a former American football quarterback who played in the National Football League (NFL) for 20 seasons. A member of the New Orleans Saints for most of his career, Brees is second in NFL career passing completion percentage, career touchdown passes, career passing yards, career pass completions, and career pass attempts. He also holds the record of consecutive games with a touchdown pass, breaking the feat held by Johnny Unitas for 52 years. More about Drew Brees

Current items with a signature of Drew Brees

These are the most current items with a signature of Drew Brees that were listed on eBay and on other online stores - click here for more items.

Traded items with a signature of Drew Brees

If you're interested in Drew Brees Rookie cards you might want to take a look at our sister site that specializes in Football Rookie Cards only.

Most recently, these items with a signature of Drew Brees were sold on eBay - click here for more items.

Saints legend Drew Brees says he'd still be playing had it not been for 2005 sho (10/06/22): Brees last played in January of 2021 when New Orleans fell to Tampa Bay in the playoffs

Brees leaving NBC after one season as analyst (06/08/22): Drew Brees is officially done at NBC Sports after one year, as the former Saints quarterback will not be a part of the network's NFL and Notre Dame coverage in 2022.

Top 10 NFL all-time passing touchdown leaders, led by Tom Brady and Drew Brees (01/2022): In the 2020 NFL season, Tom Brady (43) and Drew Brees (41) battled it out in an NFC divisional round match up as the Tampa Bay Buccaneers took on the New Orleans Saints. That game not only featured the oldest quarterback matchup in NFL history but it was be a battle between two of the

Tom Brady gets shut out for first time in 15 years vs. Saints, keeping a Drew Br (12/2021): The Buccaneers were thoroughly dominated by the Saints on Sunday night

Q&A: Drew Brees on betting, his new job, Buccaneers-Saints and more (10/2021): ESPN's David Purdum caught up with the former Saints quarterback to talk about his new role as a sportsbook ambassador, teams on his radar and more.

Would Drew Brees be tempted to make NFL comeback? Arm feels 'worse now than at a (07/2021): Brees doesn't sound like he's thinking about returning to the NFL anytime soon

Drew Brees offers high praise of Justin Herbert after attending Chargers' minica (06/2021): Herbert has made a believer out of the NFL's all-time passing leader

2021 NFL Draft: What Saints failed to do in post-Drew Brees era and one pick the (05/2021): The Saints focused on defense with their six draft picks

Drew Brees breaks down his struggles in final season: 'I only really felt good i (04/2021): Brees' final season wasn't what he had hoped

Drew Brees video shows intense workout, raising questions about QB's potential r (02/2021): It appears Brees may not be on the verge of retirement, after all

Why Alvin Kamara's monster game was so important to Saints, Drew Brees (12/2020): The 41-year-old Brees has the perfect age-defying remedy: throwing short passes to Kamara, who does so much damage after the catch.

Barnwell: Time to worry about Drew Brees and the Saints? What I've seen in a 1-2 (09/2020): New Orleans has issues, and they start with a quarterback who's showing his age. Fixing them isn't as easy as getting back Michael Thomas.

Jenkins says Saints closer after Brees dialogue (08/2020): Malcolm Jenkins said Thursday that the dialogue between himself and Drew Brees over the quarterback's national anthem comments was "important for the country and important for us."

Drew Brees working to kick hand-licking habit prior to 2020 season amid COVID-19 (07/2020): The future Hall-of-Famer is trying to break a habit

Brees family to sponsor black college HOF event (06/2020): Drew Brees and his wife, Brittany, will be the presenting sponsors of a Black College Football Hall of Fame event next month, as the quarterback continues his efforts to act as an ally following comments about kneeling during the national anthem.

Saints QB Drew Brees and his wife donate $5 million to Louisiana for coronavirus (03/2020): Drew Bress and his wife are doing their part to fight COVID-19

Sean Payton believes Taysom Hill's contract negotiation will 'take a little more (02/2020): The Saints have some decisions to make at quarterback

Saints' Taysom Hill addresses upcoming free agency, views himself as a quarterba (01/2020): Hill is a restricted free agent, but is in a holding pattern as the Saints wait on Drew Brees to make his retirement decision

NFL Week 8 grades: Saints get an A+ in Drew Brees' return, Steelers get B- for u (10/2019): Here are the Week 8 grades for every team that played on Sunday and Monday

Drew Brees hurls five TDs in Saints' win over Steelers (11/2014): The standings say the New Orleans Saints are in first place. For once, it looked that way on the field too.

Who Dat Princess?! Drew Brees' daughter's name announced Thursday night (08/2014): The name of the princess of the Who Dat Nation has been revealed.

Drew Brees Is Having Another Baby! (02/2014): Saints Quarterback Drew Brees and his wife Brittany are expecting. That’s according to E! online. It’ll be the fourth child for the couple who broke the news at a party Saturday night. The two have three sons.

NFL players of the week: Drew Brees, Greg Hardy take Week 17 awards (12/2013): It's the third time this season Brees has won the player of the week. He racked up 381 passing yards and threw for four touchdowns in a dominating 42-17 win over the Tampa Bay Buccaneers , leading the Saints to a wild card berth.

How badly will Drew Brees carve up the Jets? (10/2013): The question for the gashed, humbled members of Gang Green is this: If Andy Dalton — ANDY DALTON!!! — can torch you guys for 5 TD passes, how many should...

New Orleans Saints' Drew Brees 'on a mission' after distraction-free offseason (08/2013): Armed with new weapons at wide receivers, the Saints are poised to bounce back from a down season

Drew Brees is not a terrible person for tipping $3 on a takeout order (07/2013): Torii Hunter led the way in a Detroit Tigers' offensive onslaught against the ... The Detroit Pistons have acquired guard Brandon Jennings from the Milwaukee ...

Drew Brees: Saints' first 'normal offseason' since 2009 (06/2013): The New Orleans Saints are feeling optimistic as they enter a new season without the distractions of recent years. Drew Brees said "this is the first normal offseason we've had since '09."

Saints 5th round pick excited to grab passes from QB Drew Brees again (04/2013): The Saints bolstered their wide receiving group, taking Oklahoma’s Kenny Stills with the No. 144 overall pick and first selection of the Saturday.

Drew Brees open to restructuring contract with Saints (02/2013): New Orleans Saints quarterback Drew Brees says he is willing to consider any move that would help the Saints get under the salary cap. That includes restructuring his current contract.

Saints' Drew Brees embraces New Orleans ambassador role (01/2013): New Orleans Saints quarterback Drew Brees speaks on the game of financial football at the New Orleans convention center Wednesday, one of many events he has taken on to help his city. . /

Drew Brees reflects on tumultuous Panthers game and 2012 season (12/2012): The Saints' 2012 campaign ended symbolically with a game full of momentum swings that ultimately landed the black and gold on the losing end.

Joe Vitt defends Drew Brees after Saints' crushing loss (11/2012): Drew Brees didn't get the job done for the New Orleans Saints in a killer loss Thursday night. The mistake-filled performance stunned one teammate and had his coach coming to his defense.

Drew Brees says it's going to be tough to see Joe Vitt go for the New Orleans Sa (08/2012): Nashville, Tenn. -- New Orleans Saints quarterback Drew Brees talked to The Times-Picayune's Larry Holder following the game against the Tennessee Titans about interim coach Joe Vitt about to start serving his suspension.

Drew Brees says he won't sit out the season, as negotiations drag on (06/2012): Drew Brees made the media rounds Tuesday with appearances on five different radio and television programs, receiving countless questions about the NFL's bounty investigation and his contract negotiations with the New Orleans Saints. Throughout the day, Brees hammered home two...

Drew Brees in New York, not New Orleans (04/2012): One year ago at this time, Drew Brees was leading the most intense player-only workouts in the league. Now he's leading a different team -- the NFLPA -- as voluntary workouts start back in New Orleans.

Saints Bounty Punishments: Drew Brees 'Speechless' By Sean Payton Suspension (03/2012): New Orleans quarterback Drew Brees has seemingly had quite an emotional offseason. Earlier this month, Brees was described as "livid" over being slapped with the franchise tag by the Saints instead of receiving a long-term contract.

Aaron Rodgers beats out Drew Brees for one as most marketable in the NFL (01/2012): Brees was fourth on the list

Drew Brees' new NFL passing record: A 'classless' move? (12/2011): The New Orleans Saints quarterback broke Dan Marino's record for the most passing yards in a season — but not without stirring up controversy

Drew Brees powers Saints to Giants rout (11/2011): AFP/New Orleans, Louisiana Drew Brees threw four touchdown passes and ran for another on Monday to spark the New Orleans Saints to a 49-24 rout of the New York Giants in a game of National Football League contenders.

Drew Brees had to go to Plan B with his Saturday evening dinner without beefy ma (10/2011): Football players are creatures of habit

Drew Brees will be in Manning territory when he gets his extension (08/2011): And that deal may be coming very, very soon.

Drew Brees' contract could be next now that Peyton Manning's deal is done (07/2011): Brees is in final year of contract with New Orleans Saints

NFL, NFLPA negotiators meet for 2nd day as Saints' Drew Brees, other players rea (06/2011): As NFL owners set their sights on their upcoming meeting in Chicago, many players are looking toward getting back to work.

5 at 10: Drew Brees, the Wolfpack and Kyle Busch's driving habits (05/2011): The 5-at-10 was honored to be part of the Best of Preps banquet last night. It's a wonderful event, and one that a lot of people at the TFP and our corporate partners take a lot of pride in

New Orleans Saints QB Drew Brees to be inducted into Texas High School Football (04/2011): The banquet is this weekend

Drew Brees happy to take lead role for NFL players (03/2011): New Orleans Saints QB: 'I feel like I've been charged with that responsibility'

New Orleans Saints quarterback Drew Brees turns his attention to NFL labor situa (01/2011): A deal needs to be in place by March or there will probably be a lock out

What is Drew Brees' 'scar?' (12/2010): Drew Brees. Getty Images. NEW ORLEANS - Even with all the fame New Orleans Saints quarterback Drew Brees has enjoyed in the last year, people still seem to have one question about him.