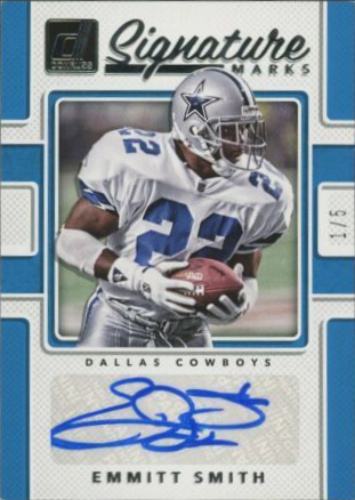 Emmitt James Smith III (born May 15, 1969) is an American former professional football player who was a running back in the National Football League (NFL) for 15 seasons, primarily with the Dallas Cowboys. Among other accolades, he is the league's all-time leading rusher. More about Emmitt Smith

Current items with a signature of Emmitt Smith

These are the most current items with a signature of Emmitt Smith that were listed on eBay and on other online stores - click here for more items.

Traded items with a signature of Emmitt Smith

If you're interested in Emmitt Smith Rookie cards you might want to take a look at our sister site that specializes in Football Rookie Cards only.

The most expensive item with a signature of Emmitt Smith (Emmitt Smith Game-Used Reebok Jersey White 2002 Cowboys Autographed) was sold in October 2021 for $10175.00 while the cheapest item (Emmitt Smith Sport Stars USA 94/95 Gold Signature trading card) found a new owner for $0.99 in July 2022. The month with the most items sold (76) was December 2021 with an average selling price of $189.99 for an autographed item of Emmitt Smith. Sold items reached their highest average selling price in September 2018 with $314.99 and the month that saw the lowest prices with $12.51 was March 2014. In average, an autographed item from Emmitt Smith is worth $70.00.

Most recently, these items with a signature of Emmitt Smith were sold on eBay - click here for more items.

Emmitt Smith’s son has huge game as Stanford rolls in opener (09/05/22): Emmitt Smith's son E.J. had a huge game for Stanford in a romp over Colgate

WATCH: Son of Cowboys legend Emmitt Smith breaks off 87-yard TD run for Stanford (09/04/22): E.J. Smith is expected to be one of the top running backs in the nation in 2022; he wasted no time in living up to that billing Saturday. | From @ToddBrock24f7

Hall of Famer Emmitt Smith on Cowboys' woes: 'Coaches will have to coach better' (02/12/22): Cowboys great Emmitt Smith says the team's current coaches must improve game and time management after a disappointing end to the season.

Emmitt Smith becomes partner in new full-time NASCAR Xfinity Series team (08/2021): Pro Football Hall of Famer will be a partner in Jesse Iwuji Motorsports, which will debut in 2022.

Ranking the best NFL draft picks of all time: Emmitt Smith leads top five ever s (04/2021): With the 2021 NFL Draft almost here, let's look at the five best players in NFL history taken at No. 17 overall

Emmitt Smith on Dak Prescott contract: Cowboys will ruin team chemistry if they (09/2020): The Hall of Famer has a stern warning for his former club

Emmitt Smith on Dak Prescott contract talks: Cowboys 'can't play chicken' and 'w (05/2020): The Hall of Famer is unequivocal in his stance on re-signing Dak Prescott

National Signing Day 2019: EJ Smith, son of NFL and Florida legend Emmitt Smith, (12/2019): The son of the former Cowboys star is a four-star prospect out of Texas

Emmitt Smith not ready to anoint new 'Triplets' (01/2019): While Amari Cooper, Ezekiel Elliott and Dak Prescott experienced plenty of success this past season, NFL Hall of Famer and Cowboys great Emmitt Smith isn't quite read to call them "Triplets."

Whicker: Beware Tarik Cohen, the Chicago Bear who came in from the cold (12/2018): Tarik Cohen is representing the HBCU football tradition when he catches and runs for touchdowns with the Chicago Bears, who host the Rams on Sunday night.

Emmitt Smith says he would pay to keep Murray if he was Cowboys owner (02/2015): Emmitt Smith enjoyed watching DeMarco Murray break his single-season rushing record this past season with the Dallas Cowboys. Promote to Mobile 0 read more

Emmitt Smith answers for ruining Bills fans' lives, talks night before Super Bow (01/2015): The Dallas Cowboys great knows a thing or two about preparing for a Super Bowl. Also, will Tom Brady be the best-ever QB if the Patriots win Sunday?

Dallas Cowboys suck? Emmitt Smith disagrees, refuses to sign tweet ripping his f (11/2014): It is Dallas Cowboys week, and although it is a shortened one, the intensity is at an all-time high with the Eagles playing their rivals on Thanksgiving.

PFT Live 10/30: Emmitt Smith, Week 9 Picks (10/2014): Mike Florio talks to Hall of Fame RB Emmitt Smith about the Cowboys success this season and who might break his all-time rushing record. Mike and Michael David Smith reveal their picks for week 9.

Emmitt Smith discusses state of RBs in today's NFL (07/2014): The NFL all-time rushing leader talked about the state of the running game.

Emmitt Smith Discusses The Cowboys Running Game (12/2013): Hall of Famer Emmitt Smith jumped in studio with the G-Bag Nation on Wednesday to talk about his Cowboys.

Rap Songs of the Week: Migos Step Into the '90s-Sports-Nerd Arena With 'Emmitt S (11/2013): Caddy Bay,  Gucci Mane vs. Boards of Canada Well, we've gotten to the point in this Internet Rap thing where an album-length project that gently places Gucci Mane raps over Boards of Canada songs isn't even all that much of a WTF moment anymore...

COWBOYS: Emmitt Smith keeping busy in life after football (10/2013): Not many people thought Emmitt Smith would do much after a successful high school football career in his hometown of Pensacola, Fla.

Emmitt Smith, Partners Launch National Firm (08/2013): Start each day with GlobeSt.com's Texas AM Alert for original coverage of the latest transactions and trends shaping the Houston, Dallas markets, as well as the entire Southwest region.

Q&A: Hall of Fame running back Emmitt Smith (04/2013): In an interview with The World-Herald's Dirk Chatelain, Emmitt Smith, the featured speaker at the D.J.'s Hero Awards Luncheon on May 7 at CenturyLink Center, talks about Nebraska, the Cowboys' struggles, concussion concerns,...

Emmitt Smith disappointed in Dallas Cowboys (01/2013): Legendary running back Emmitt Smith wonders where the consistency is with the Dallas Cowboys, but he's not about to throw team owner Jerry Jones under the bus.

B&C Morning Show: Emmitt Smith Weighs In On Jets, Cowboys (12/2012): Smith himself certainly knows a thing or two about winning, having played for three Super Bowl-winning Cowboy teams, so his thoughts certainly carry some weight.

Emmitt Smith on 'DWTS' elimination: 'I tried my hardest' (11/2012): Emmitt Smith says he's proud not to have let down Cheryl Burke.

Emmitt Smith greets fans in Jacksonville ahead of Florida-Georgia weekend (10/2012): Emmitt Smith danced into town Thursday - literally - for a quick appearance at Academy Sports and Outdoors on Atlantic Boulevard.

The story of getting autographs from Bill Clinton and Emmitt Smith on the same d (08/2012): Matt Merletti and his older brother Mike were excited about getting the chance to talk to President Bill Clinton in the Oval Office in 1996.

Emmitt Smith cast in 'Dancing With the Stars: All-Stars' (07/2012): The Dallas Cowboys great and a former Cowboys Cheerleader are part of the upcoming season.

Around the Horn with ... Emmitt Smith, Pinkerton Track (02/2012): Pinkerton track coach Ian French said of his senior captain Emmitt Smith, "He's everything you could want in an athlete. He's just a great kid." His peers obviously agree as Smith was named prom king last spring.

Friday Links: Emmitt Smith and the Cowboys have found something to argue about (12/2011): News, notes, jokes, and quotes.

B&C Morning Show: Emmitt Smith With Boomer & Carton (11/2011): After sorting out a scheduling snafu, Hall of Fame running back Emmitt Smith joined the program prepared to talk some football.

Emmitt Smith returns to UF for book signing (09/2011): Gators legend Emmitt Smith had a signing for his new book, "Game On" GAINESVILLE – It's a much wiser Emmitt Smith who returned to his roots on Saturday.

Emmitt Smith Winning At Poker, Life (03/2011): Much like Charlie Sheen, Emmitt Smith has spent his life doing one thing and one thing only: winning. Now, he's taken his dominance to the world of competitive poker.

Emmitt Smith: Vikings should show their commitment to Peterson (01/2011): Emmitt Smith, the NFL's career rushing leader, said giving Adrian Peterson a long–term contract should rank at or near the top of the Vikings' priorities.