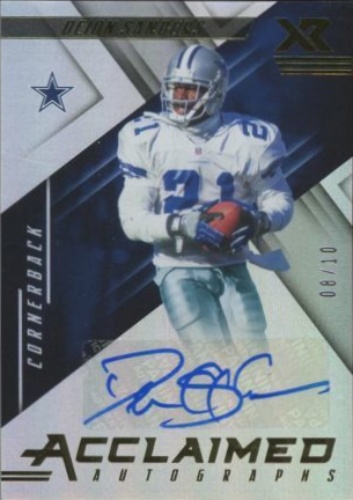 Deion Luwynn Sanders Sr. (born August 9, 1967) is an American football coach and former player who is the head coach at the University of Colorado Boulder. Nicknamed "Prime Time" or “Coach Prime”, he played in the National Football League (NFL) for 14 seasons with the Atlanta Falcons, San Francisco 49ers, Dallas Cowboys, Washington Redskins, and Baltimore Ravens. Sanders was also a baseball outfielder for nine seasons in Major League Baseball (MLB) with the New York Yankees, Atlanta Braves, Cincinnati Reds, and San Francisco Giants. He won two Super Bowl titles and made one World Series appearance in 1992, making him the only athlete to play in both a Super Bowl and a World Series. More about Deion Sanders

Current items with a signature of Deion Sanders

These are the most current items with a signature of Deion Sanders that were listed on eBay and on other online stores - click here for more items.

Traded items with a signature of Deion Sanders

If you're interested in Deion Sanders Rookie cards you might want to take a look at our sister site that specializes in Football Rookie Cards only.

The most expensive item with a signature of Deion Sanders (Deion Sanders H&B Game Used Signed Bat Atlanta Braves Yankees Prime Time) was sold in July 2020 for $4995.00 while the cheapest item (Deion Sanders Hand Signed 1992 Stadium Club #15 COA) found a new owner for $0.77 in May 2009. The month with the most items sold (62) was December 2022 with an average selling price of $123.74 for an autographed item of Deion Sanders. Sold items reached their highest average selling price in September 2016 with $299.99 and the month that saw the lowest prices with $2.99 was February 2023. In average, an autographed item from Deion Sanders is worth $60.99.

Most recently, these items with a signature of Deion Sanders were sold on eBay - click here for more items.

Top CB Cormani McClain signs with Colorado on National Signing Day 2023, ending (02/01/23): The top cornerback in the nation joined Deion Sanders in his first year with the Buffaloes

Deion Sanders and Colorado have a loaded schedule — Coach Prime will need to be (01/2023): The Pac-12 gave Deion Sanders and the Colorado Buffaloes plenty of obstacles in 2023. It's not just the teams. It's the alignment and sequencing of games.

Report: Deion Sanders tells recruits he’ll pick a school by Saturday (11/2022): Hall of Fame cornerback Deion Sanders officially has become a big-time college football coach. Big-time college football coaches treat lower-level jobs as stepping stones to something bigger and better. Deion seems to be on the bring of taking a bigger and better job. Via Kevin O’Donnell of Fox 13 i

Deion Sanders to Auburn? Bo Jackson weighs in on possibility (10/2022): Bo Jackson and Deion Sanders were multi-sport rivals in the 1980s and 90s. Does Jackson want to see "Prime" lead his alma mater's football program?

Sanders: 'My dream' for SWAC to keep growing (07/2022): Jackson State coach Deion Sanders lauded the "exponential growth" of the Southwestern Athletic Conference and pushed the possibility of forming an HBCU super conference.

Deion Sanders warns Saban, ‘I’m not the one to play with.’ (05/2022): Deion Sanders and Nick Saban exchange massive shots.

Eagles among teams Deion Sanders calls out for not attending Jackson State’s pr (03/2022): The #Eagles were among the teams called out by #JacksonState head coach #DeionSanders for not sending to personnel to the schools #ProDay #NFLDraft2022

Jackson St.'s Sanders to miss 2nd straight game (10/2021): Jackson State coach Deion Sanders, who did not coach last week against Bethune-Cookman, will be out again Saturday against Mississippi Valley State.

Deion Sanders and 12 other FCS coaches primed to make the FBS leap﻿ (04/2021): Deion Sanders wants to build a powerhouse at Jackson State, but he's on FBS radars already, so what might be his next move? And what other coaches are capable of moving up?

Mission possible: Deion Sanders finds his passion leading Jackson State, and ear (03/2021): So far so good as Coach Prime is making an impact as a college football coach

Sanders' 2nd game as Jackson St. coach ppd. (02/2021): Jackson State head coach Deion Sanders' second game with the team has been postponed due to a positive COVID-19 test on Mississippi Valley State and subsequent quarantining of student-athletes within the program.

Deion Sanders talks Cowboys, entertains the idea that D.K. Metcalf could chase h (11/2020): Sanders recently caught up with CBS Sports to discuss everything going on in the NFL

Deion Sanders has personal talk with Antonio Brown, discusses being suicidal at (06/2020): The Pro Football Hall of Famer had a heartfelt talk with the former Steelers receiver

Antonio Brown works out with Deion Sanders, who says receiver's working 'on his (05/2020): Sanders has shown his support for Brown

Hall of Famer Deion Sanders says too many players are getting put in the Hall of (01/2020): Canton is already an exclusive club, but Prime Time thinks it should be even more exclusive

Chad Johnson and Deion Sanders go back-and-forth in hilarious video of the two f (12/2019): Who are you taking if these two go one-on-one?

Watch: Brian Urlacher tackles Deion Sanders during ‘NFL 100’ Super Bowl commerci (02/2019): The highlight of Super Bowl Sunday might have the NFL's own commercial, celebrating their upcoming 100th season of existence.

Deion Sanders slams son over 'hood stuff' (04/2015): Deion Sanders is such a dad. The NFL legend called out Deion Sanders Jr. on Twitter for saying he only eats "hood doughnuts." In response, the elder Sanders reminded his son he has a trust fund, a condo and his own clothing line called "Well Off."

Deion Sanders' lawsuit against ex-wife delayed (03/2015): A trial over a defamation lawsuit filed by Pro Football Hall of Famer Deion Sanders against his ex-wife has been delayed.

2017 CB Recruit Challenges Deion Sanders to One-on-One (02/2015): Richard LeCounte is a 4-star athlete, as per 247Sports' composite rankings , who is uncommitted.   LeCounte is not afraid to talk a little trash, and he is going after some pretty big fish.  Watch this 2017 recruit call out NFL great Deion Sanders.

Deion Sanders Asks Judge To Deny Ex-Wife’s Child Visits Because Of ’Garbage’ She (11/2014): “PrimeTime” Deion Sanders will ask a judge to suspend his ex-wife’s visitation rights with their three children after she posted audio of his daughter saying the NFL Hall of Famer… READ ON

Deion Sanders Sticks To His Report Some 49er Players Want Him Out As Head Coach (10/2014): Hall of Famer Deion Sanders is sticking to his report that some of the San Francisco 49er players want Jim Harbaugh gone as the head coach of the team.Sanders made the comments on September 28th...

Deion Sanders looks into merging Prime Prep and another school (08/2014): Prime Prep Academy co-founder Deion Sanders traveled to Austin on Thursday for a meeting with the Texas Education Agency.

Deion Sanders’ Bandana (06/2014): The MMQB presents NFL 95, a special project running through mid-July detailing 95 artifacts that tell the story of the NFL, as the league prepares to enter its 95th season. See the entire series here.

Deion Sanders' Ex-Wife, Pilar Sanders: America Can't Touch Me ... I Answer to Mo (05/2014): Pilar Sanders is a Moorish National Aboriginal, Indigenous Natural Person who should not be governed by any laws or courts in the United States of America ... or so she's claiming in a bizarre new legal doc.The ex-wife of Deion Sanders, who now goes by… Permalink

Sneak Peek! Deion Sanders Rocks an Afro, Guest Stars on 'The Soul Man' (04/2014): NFL Hall of Famer Deion Sanders is putting on his acting cap as well as an afro for his guest-starring gig on an upcoming episode of TV Land's "The Soul Man."

Deion Sanders to be featured at annual Sunland Gala (03/2014): SUNLAND PARK, N.M. â   Deion Sanders, an ex-NFL player, is scheduled to be the key note speaker at the 11 th annual Sunland Park Gala.   The gala is the premier event before the Sunland Derby and benefits United Blood Services. ...

Deion Sanders: Gay NFLers in all of my locker rooms (02/2014): Football legend Deion Sanders played for five teams during his 16-year NFL career.

Deion Sanders, Pat Hanlon Have Verbal Spar On Live TV (01/2014): Deion Sanders should know by now that anything he says can and will be used against him regardless of how he tries to add a comical spin to it. His recent round of verbal sparring is a prime example. On …

Babyface -- I'm Happy Deion Sanders Is Hooking Up with My Ex-Wife (11/2013): If anyone's gonna have sex with Babyface's ex-wife, the legendary music producer is glad it's Deion Sanders.Kenny "Babyface" Edmonds -- who divorced ex-wife Tracey Edmonds in 2005 -- recently sat for an interview with Oprah, and explained how Tracey's… Permalink

Deion Sanders to Star in TV Show on the Oprah Network: “It’s Prime’s Time” (07/2013): If Oprah can give Lindsay Lohan a show, Deion definitely deserves one.

Deion Sanders is Officially Divorced (06/2013): After a long and contentious divorce, former NFL and MLB star Deion Sanders is now officially divorced from his second wife. The former Dallas Cowboy had originally filed for divorce from Pilar Sanders all the way back in September 2011. …

Deion Sanders’ Missing $15,000 Dog Returns Home Safely (05/2013): Deion Sanders has made a lot of money in his life. One look at his bedroom with its golden interior and lavish silk sheets can tell you that much. So, it would seem, a $15,000 expense wouldn’t be too big of a deal to Sanders. That is, unless you’re talking about his dog — yes, […]

Deion Sanders: Mathieu is 'all that and a bag of chips' (02/2013): Louisiana State defensive back Tyrann Mathieu stretches before running the 40-yard dash during the NFL football scouting combine in Indianapolis. / Dave Martin, AP

Tony Romo criticized by Deion Sanders and Michael Irvin after poor showing again (12/2012): The Dallas Cowboys threw away their chance at a 2012 post-season with a 28-18 loss to the Washington Redskins, spurring many fans of "America's Team" to lash out at quarterback Tony Romo.

Deion Sanders' Prime Prep Academy withdraws from UIL (11/2012): The school’s Board of Directors has voted to withdraw its membership from the University Interscholastic League (UIL) effective immediately.

Jays’ Brian Butterfield was ‘in awe’ of Deion Sanders as two-sport star’s manage (09/2012): The figure playing catch on the sidelines looked familiar. He did seem out of place in an Orioles uniform, but Butterfield was not fooled

Video: Deion Sanders’ “Prime Prep” Football Coaches and Players Confront a Repor (08/2012): What is going on at Prime Prep?

Here’s Cam Newton Doing the Deion Sanders Dance (10/2011): Is there anything Cam Newton can't do?

Rumor Control: Deion Sanders Say He Ain’t File Fo’ No Divorce… GTFOHWTBS!!! (09/2011): Okay so maybe not the GTFOHWTBS part… The rumor mill has been going crazy over reports that Deion Sanders, Mr.Primetime himself was ready to divorce the finest woman to ever grace the Football Wives Hall of Fame. Yeah we know

Deion Sanders Just Took This $21 Million Texas Estate Off The Market (07/2011): The Hall of Famer's estate sits on more than 109 acres of land and includes a basketball court, tennis courts, an indoor and outdoor pool, a bowling alley, a guest house, a Hall of Fame gallery, and of course, a full football field.

FSU great Deion Sanders inducted into college football Hall of Fame (06/2011): After 23 years, one of the best athletes college football has ever seen finally got his due. Deion "Prime Time" Sanders, a three-time All-American at Florida State from 1985-1988, will be inducted into the College Football Hall of Fame in December--a decision that most believe is long overdue.

Ex-Cowboys star Deion Sanders on Dez Bryant: 'He needs help' (03/2011): Deion Sanders used the Dallas airwaves this past week to criticize Dez Bryant after the Cowboys receiver was given a criminal trespass warning at NorthPark Center last Saturday, the Dallas Morning News reported.