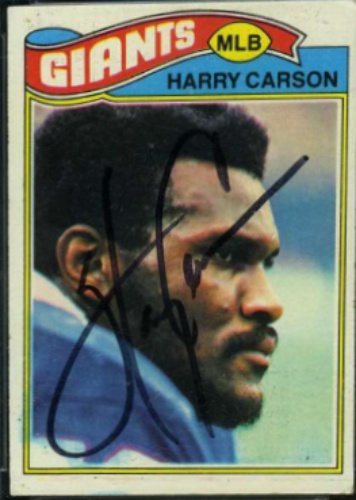 Current items with a signature of Harry Carson

These are the most current items with a signature of Harry Carson that were listed on eBay and on other online stores - click here for more items.

Traded items with a signature of Harry Carson

If you're interested in Harry Carson Rookie cards you might want to take a look at our sister site that specializes in Football Rookie Cards only.

The most expensive item with a signature of Harry Carson (LAWRENCE TAYLOR HARRY CARSON BANKS REASONS SIGNED NEW YORK GIANTS PROLINE HELMET) was sold in July 2017 for $599.99 while the cheapest item (Harry Carson Signed Auto Autograph 4x6 Photo Photograph PSA/DNA JSA Guarantee) found a new owner for $0.35 in December 2022. The month with the most items sold (24) was January 2023 with an average selling price of $12.14 for an autographed item of Harry Carson. Sold items reached their highest average selling price in November 2013 with $149.97 and the month that saw the lowest prices with $0.74 was June 2017. In average, an autographed item from Harry Carson is worth $20.00.

Most recently, these items with a signature of Harry Carson were sold on eBay - click here for more items.

A month from release - this just happened to Carson Yeung (12/10/18): Former BCFC owner slapped with a new court order

Why Carson was not happy with Wigan players during Derby victory (12/09/18): The goalkeeper kept a clean sheet as the Rams ran out 1-0 winners against Wigan on Saturday

Jim Kelly, Harry Carson To Get Coin-Toss Honors At Hall Of Fame Game (07/24/14): Kelly, inducted into the hall in 2002, in May completed radiation and chemotherapy sessions to treat sinus cancer, which spread from his jaw.

Giants Hall of Famer Harry Carson: N-word users 'have no sense of history' (03/03/14): The former Giants weighed in on the possibility of the NFL penalizing on-field use of the word.

One on 1 Profile: Pro Football Hall of Famer Harry Carson Uses Success to Give a (02/03/14): Former Giants linebacker Harry Carson has happy Super Bowl memories from the game in 1987, but he's just as proud of what he's accomplished off the field.

Harry Carson: Brain damage afflicts more NFLers than you think (11/2013): On the day after it was revealed Leonard Marshall, one of his former New York Football Giants brothers, had been diagnosed with the degenerative brain condition known as CTE, Harry...

Giants great Harry Carson discusses “League of Denial: The NFL’s Concussion Cris (10/2013): The Hall of Fame linebacker is a prominent voice in the PBS documentary

NFL Hall Of Famer Harry Carson Says He Never Would’ve Played Football Had He Kno (10/2012): After more than 20 years of retirement, the legendary Giants linebacker suffers the residual effects of concussions to this day. But you can’t tell by looking at him.

Liguori: Harry Carson And Snowboarder Kevin Pearce Help Open The Head Injury Ass (04/2012): Kevin Pearce, the snowboarder who was critically injured in December 2009 while training for the Vancouver Olympic trials, sat next to me at the Head Injury Association Building Dedication on Long Island on Tuesday...

GOOD QUESTION: When will Harry Carson have a Florence park named after him? (06/2011): FLORENCE – Florence-native Harry Carson has done what few Americans have, and even fewer Florentines have: He not only played in the NFL, he excelled at it … so much so that he was inducted into the Pro Football Hall of Fame in 2006. So, when will he get something named after him?

Harry Carson replaces helmet for Midland Park charity auction (02/2011): After former Giant and Hall of Famer Harry Carson’s donation to a local charity was swiped at a fundraising event, he was quick to make sure it wasn’t the nonprofit’s loss.