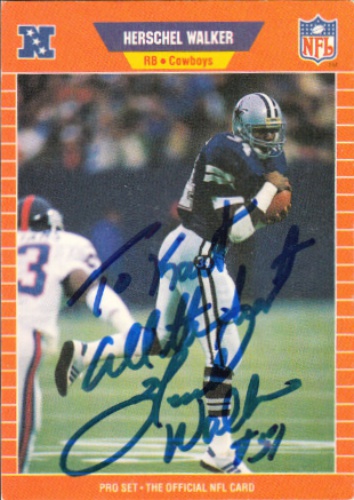 Herschel Walker (born March 3, 1962) is a former American football running back who played in the National Football League (NFL) for 12 seasons. He is the Republican nominee in the 2022 United States Senate election in Georgia. More about Herschel Walker

Current items with a signature of Herschel Walker

These are the most current items with a signature of Herschel Walker that were listed on eBay and on other online stores - click here for more items.

Traded items with a signature of Herschel Walker

If you're interested in Herschel Walker Rookie cards you might want to take a look at our sister site that specializes in Football Rookie Cards only.

Most recently, these items with a signature of Herschel Walker were sold on eBay - click here for more items.

Ranking college football's 100 best running backs of the past 60 years (04/12/22): With so many greats to choose from -- Earl Campbell, Reggie Bush, Barry Sanders, Herschel Walker -- picking the best of the best is no easy task.

After decades dormant, USFL to relaunch in '22 (06/03/21): The USFL is relaunching in 2022, four decades after the spring football league's short-lived run that featured such stars as Reggie White, Herschel Walker, Steve Young and Jim Kelly, as well as future President Donald Trump as an owner.

No Doak Walker Award for Tigers' Henderson (12/2018): The stage was set for the University of Memphis and Running Back Darrell Henderson to have a huge night at the College Football Awards Show in Atlanta. Unfortunately, this was not the case.

Football legend Herschel Walker coming to Rochester (04/2015): Walker will be keynote speaker at a Rochester luncheon in late September for East House.

Herschel Walker on Nick Chubb: 'I’m amazed' (03/2015): The 1982 Heisman winner is impressed with what Nick Chubb has been able to accomplish in what he calls a more competitive football era.

Jack Stallard talks about Herschel Walker and the ETVarsity Best Prep Banquet (01/2015): Jack Stallard is the Sports Editor of the Longview News-Journal. KETK Sports Director asked Stallard about this Sunday's big edition on the newspaper. Promote to Mobile 0 read more

Ex-NFL star Herschel Walker shares message at Beale Air Force Base (11/2014): Herschel Walker is famous for his super-human athleticism as a football star, Olympian and mixed martial artist. The former Heisman Trophy winner spoke at Beale Air Force Base recently to raise awareness of mental illness and to encourage servicemembers to seek help if they feel something is wrong.

Herschel Walker: No vote for Gurley, Winston (10/2014): If he had to cast his Heisman Trophy ballot today, 1982 Heisman winner Herschel Walker said he would not vote for either Todd Gurley or Jameis Winston.

Football legend Herschel Walker coming to MCAS Beaufort, Parris Island (07/2014): Herschel Walker will visit the Lowcountry to share this message with area service members: It's OK to ask for help.

Herschel Walker visits McMinn Co. and talks about NFL comeback (06/2014): It was early September 1980, Georgia Head Coach Vince Dooley told the new freshman in town Herschel Walker he could travel with the team to Knoxville for the season opener, but he wasn't going to play.

Herschel Walker Backs Trump For Bills Ownership (04/2014): Herschel Walker gave an interesting interview to USA Today this week, and portions of it have spread like wildfire online after he both claimed he could step into an NFL game today–at the age of 52–and announced that he backs …

Herschel Walker in DC this week (03/2014): Former football great Herschel Walker and other sports stars will be in the nation’s capital Wednesday to promote National Health Through Fitness Day.

Herschel Walker Remembers Jerry Back When… (02/2014): With it being the 25th Anniversary of Jerry Jones buying the Dallas Cowboys the Nation had a slew of Cowboys legends joining them today remembering their first encounter with the once-new owner of the team.

Daily Buzz: Herschel Walker wants to find America's next phenom (12/2013): Want to be a star? The NFL legend wants to give back and he's taking his show on the road, searching for the best Internet talent in the U.S.

At Purple Heart ceremony, Herschel Walker tells airmen there's no shame in seeki (10/2013): When he became famous for winning the Heisman Trophy and later earning stardom in the NFL, Herschel Walker had the look of a man on top of the world.

If Ichiro Suzuki Has 4,000 Hits, How Many Yards Does Herschel Walker Have? (08/2013): Walker had over 20,000 yards in professional football, but his USFL numbers are largely ignored.

At age 51, Herschel Walker wants another MMA fight (06/2013): Herschel Walker is 51 years old, but he’s still in good enough shape to do thousands of pushups and situps a day, as he did when he was an NFL player. And Walker is hoping to do something else to show what kind of shape he’s in: Step into the cage and win a mixed…

Herschel Walker talks mental illness with Ft. Jackson soldiers (04/2013): He was one of the most legendary running backs to ever play football -- Herschel Walker -- and on Wednesday, he was in deep in the heart of Gamecock country.

Loran Smith: From running back to running businesses, Herschel Walker takes smar (02/2013): WESTLAKE, Texas - The Herschel Walker you know is likely the one who won the Heisman Trophy, played 15 years of professional football and pursued a number of competitions - from bobsledding to mixed martial arts.

Herschel Walker opens Athens restaurant Super Bowl Sunday (01/2013): ATHENS, Ga. -- When the San Francisco 49ers and the Baltimore Ravens battle for the National Football League crown Sunday, Athenians will be able to watch the Super Bowl at the restaurant of a Georgia sports legend.

To succeed at anything, give it everything, says football great Herschel Walker (04/2012): For someone who made a career out of rushing, former NFL star Herschel Walker is not one to be, well, rushed.

Herschel Walker urges airmen to take care of mental health (03/2012): EGLIN AFB - When Herschel Walker stepped into the limelight Thursday morning, it wasn't to slip between linemen, barrel over a cornerback or pummel a mixed martial artist decades his junior.His resume as a Heisman Trophy winner, Olympian and 14-year NFL running back had nothing to do with...

Local Houston Pastor Continues Series On Sports and Faith With Special Guest Her (01/2012): Does Faith Matter In Sports?

Herschel Walker tells Skyline students how to cope with life (09/2011): What Herschel Walker thought was toughness was really a defense mechanism he'd created to shield himself from a painful...

Herschel Walker visits students: Star talks about the effects of bullying (08/2011): It would have been a challenge for anyone to calm a screaming assembly of about 800 middle school students during the final hour of school Thursday.

ESPN to air Herschel Walker documentary (07/2011): ESPN will begin a look at the history and tradition of the Southeastern Conference this season in a series of documentaries with the first one, ‘Hershel’ set the debut on Sept. 7.

Herschel Walker freak show an easy sell (05/2011): Being a mixed martial artist in your 40s is a pretty tough way to make a living.

Herschel Walker at 48 gains hard-earned respect in Strikeforce (01/2011): Former NFL star and 1982 Heisman Trophy winner is proving he's no gimmick in the world of mixed martial arts and will go into the cage for his second bout Saturday night at San Jose's HP Pavilion.