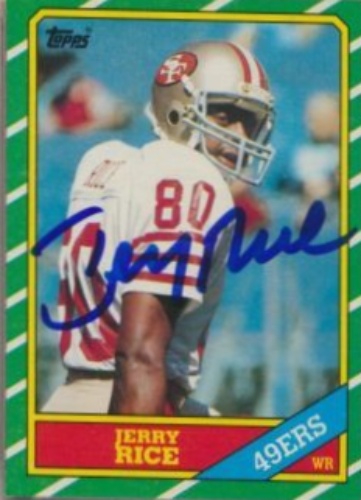 Jerry Lee Rice (born October 13, 1962) is an American former professional football wide receiver who played in the National Football League (NFL) for 20 seasons. He won three championships with the San Francisco 49ers, along with playing for the Oakland Raiders, Seattle Seahawks, and Denver Broncos. Nicknamed "World" because of his superb catching ability, his accomplishments and numerous records, led him to be widely regarded as the greatest wide receiver in NFL history, and one of the greatest players of all time. His biography on the official Pro Football Hall of Fame website names him: "the most prolific wide receiver in NFL history with staggering career totals". In 1999, The Sporting News listed Rice second behind Jim Brown on its list of "Football's 100 Greatest Players". In 2010, he was chosen by NFL Network's NFL Films production The Top 100: NFL's Greatest Players as the greatest player in NFL history. More about Jerry Rice

Current items with a signature of Jerry Rice

These are the most current items with a signature of Jerry Rice that were listed on eBay and on other online stores - click here for more items.

Traded items with a signature of Jerry Rice

If you're interested in Jerry Rice Rookie cards you might want to take a look at our sister site that specializes in Football Rookie Cards only.

Most recently, these items with a signature of Jerry Rice were sold on eBay - click here for more items.

Tom Brady retires: Future Hall of Famer one of three players in their 40s to acc (02/03/22): Tom Brady is in the same company with Jerry Rice

Jerry Rice on how playing receiver has changed, plus his current NFL comparison (12/2021): The NFL legend spoke with CBS Sports this week

Tyler Lockett joins Jerry Rice as the only two receivers in Super Bowl era to ac (11/2020): The Cardinals are happy they won't have to match up against Lockett again this season

Did Michael Irvin cheat and use stickum like Jerry Rice while playing with Dalla (02/2015): Congratulations! Your weather is set to . You can change the location at any time. Don't have an account?

Best QB-coach combo? Jerry Rice likes Brady-Belichick over Montana-Walsh (01/2015): The Hall of Fame wide receiver believes the Giants rookie wide receiver could be one of the best in the game.

Jerry Rice is not pleased Richard Sherman, Russell Wilson ate turkey on the 49er (11/2014): The San Francisco 49ers had salt rubbed in their wounds on Thursday after losing to the Seattle Seahawks. NBC set up a post-game celebration right at midfield. Jerry Rice was not pleased with this.

Jerry Rice Jr. not resting on father's laurels in Redskins camp (07/2014): RICHMOND — Pressure is not a foreign feeling for NFL rookies. From the moment they are drafted or sign as free agents, the pressure is on for them to prove that they belong on a roster. When your father is a first-ballot Hall of Famer, the pressure can only be ...

Jerry Rice Jr. gets another shot (06/2014): Mike Florio discusses the Redskins signing Jerry Rice Jr. and wonders whether it might be better for the receiver to go play in Canada before jumping into the NFL.

Jerry Rice Jr. working out for 49ers (04/2014): The 49ers are holding a workout for draft eligible players who went to college or grew up around the Bay Area and the group includes a player with a very familiar name. Jerry Rice Jr. will be one of the 64 players at the team’s facility in Santa Clara on Friday. Like his father, Rice…

49ers at Candlestick: Jerry Rice sets TD record (11/2013): In part 5 of our series on the most unforgettable 49ers moments at Candlestick Park, Jerry Rice passes Jim Brown for first place on the all-time NFL list for touchdowns.

Boomer & Carton: Jerry Rice Offers Boomer A Hug (10/2013): Rice briefly reflected on his Hall of Fame playing career, which meant that his Super Bowl XXIII triumph over Boomer's Bengals inevitably came up. It's still a sore subject for the Booms.

Jerry Rice willing to help San Francisco 49ers' receivers (09/2013): Jerry Rice not looking to become a full-time assistant coach but says he'd be willing to lend a hand with the 49ers' young receivers

Ex-Nfl Great Jerry Rice Watches Son, Unlv Practice (08/2013): Jerry Rice was easy to miss as he stood behind a gate and in the shade to watch UNLV practice Friday morning. He certainly didn't go out of his way to bring attention to himself, but even at a secluded location at Rebel Park, someone will notice the presence

NFL Pro Bowl moving to 'fantasy draft' format, with Jerry Rice, Deion Sanders as (07/2013): The Pro Bowl continues to haul in substantial TV ratings for the NFL, year after year, but the tedious AFC-vs.-NFC format and a constant stream of players backing out of the game has left the league searching for a way to upgrade the experience.

Jerry Rice responds to Randy Moss' boast about being top receiver (01/2013): Hall of Famer Jerry Rice has no interest in a back-and-forth debate with Randy Moss during Super Bowl week about who's the greatest NFL wide receiver of all time.

Calvin Johnson Talks About Breaking Jerry Rice’s Record (12/2012): It’s fitting that Calvin Johnson received a handful of Teenage Mutant Ninja Turtles gifts on Christmas, because it appears as if Megatron has found the secret of the ooze.

Lions pulling for Calvin Johnson to break Jerry Rice's record (11/2012): The Lions won't go out of their way to get Calvin Johnson a new NFL record for single-season receiving yards, but everyone in the locker room - including Johnson - hopes it happens.

Kelly Clarkson and Jerry Rice to help Microsoft open store in Corte Madera (10/2012): Nine years after Apple opened a store in the Village at Corte Madera, its rival, Microsoft, will open its own retail outpost Saturday just steps away in the same mall.

2012 Media Day: Jerry Rice, Jr. and Tevin McDonald are all grown up (07/2012): As a defensive coordinator for the San Francisco 49ers, Jim Mora was on a staff that coached Tim McDonald and Jerry Rice. Now their sons play for Mora at UCLA.

A.J. Jenkins thrilled with the chance to learn from Jerry Rice (05/2012): The sound of his voice made it clear, A.J. Jenkins couldn't believe how lucky he was to land in San Francisco and in the purview of the greatest NFL receiver of all time.

Best of the Firsts, No. 16: Jerry Rice (03/2012): As part of our offseason coverage, we’re taking a look back at some of the best first-round draft picks since the A FL-NFL merger in 1970. We’ll work our way up the draft board, starting with the best selection made with the No. 32 pick and ending with the top No. 1 pick.

Lafayette running back named to Jerry Rice Award watch list (09/2011): If Ross Scheuerman is surprised that he has made such a big impact so early in his Lafayette career, imagine how he'll feel when he hears his reputation is now nation wide.

Jerry Rice Jr. is intent on carving his own path at UCLA (08/2011): Jerry Rice Jr. may not have the size and speed to be great, but the same was said about his father. Now playing as a walk-on sophomore for UCLA, Rice Jr. is keeping his head up, working hard and waiting for his chance to shine.

Jerry Rice doomed by three poor holes at Nationwide Tour Fresh Express Classic (04/2011): He opens with 11-over 81, not looking good to make cut

I Remember … Jerry Rice, MVP of Super Bowl XXIII (02/2011): Jerry Rice always has liked the big stage. No. 2 on the list of the Sporting News’ 100 greatest football players, Rice was at his best in the Super Bowl. He played in three with the 49ers and won all three.

Jerry Rice -- No, I Won't Sign Your Face! (01/2011): Filed under: Jerry Rice , TMZ Sports Jerry Rice -- the greatest WR of all time -- was swarmed by a pack of hilariously obnoxious fans Thursday night in Hollywood  ... including one guy who wanted JR's Hancock right on his face! Read more