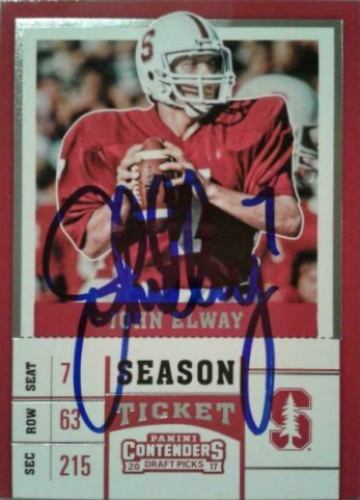 John Albert Elway Jr. (born June 28, 1960) is an American professional football executive and former quarterback who is the president of football operations for the Denver Broncos of the National Football League (NFL). More about John Elway

Current items with a signature of John Elway

These are the most current items with a signature of John Elway that were listed on eBay and on other online stores - click here for more items.

Traded items with a signature of John Elway

If you're interested in John Elway Rookie cards you might want to take a look at our sister site that specializes in Football Rookie Cards only.

Most recently, these items with a signature of John Elway were sold on eBay - click here for more items.

John Elway’s contract with Broncos has expired (02/28/22): John Elway stepped down from Broncos general manager duties last year, and his president of football operations tenure has now ended as well.

John Elway to hire new GM for Broncos, surrender final say over personnel starti (01/2021): Elway has served as the chief decision-maker for Denver since 2011

Broncos GM John Elway makes it clear Drew Lock hasn't made it yet, but they are (04/2020): Drew Lock may be QB1, but he still has some things to prove

John Elway on PI rule: I’m sure we’ll revisit it in the offseason (11/2019): On Monday, Broncos coach Vic Fangio surmised that only a "five-car pileup" will get the league office to overturn challenged pass interference calls. A day later, his boss, John Elway, confirmed what everyone has figured out: It has to be something "really, really, really blatant"

Mark Schlereth: No reason to trust John Elway to fix the Broncos (10/2019): One of John Elway's former Broncos teammates thinks Elway doesn't have what it takes to lead the team back to the top. Mark Schlereth, who blocked for Elway in both of his Super Bowl-winning seasons as the Broncos' quarterback, believes that Elway has made one good move in his time running

Jets keys to win over Bills start with preventing Josh Allen from running wild - (12/2018): How can the 3-9 Jets snap their six-game losing streak when they travel to Buffalo to face a team that destroyed them 41-10 a month ago?

Briefs: Gary Kubiak shows Broncos players clips of John Elway (04/2015): Gary Kubiak stood before his new Broncos team for the first time. When it comes to leading a group of young, elite, eager athletes, a coach has only one chance to make a strong first impression.

John Elway not concerned with Broncos' changes (03/2015): John Elway knows he lost several starters off his division-winning team. The Denver Broncos GM, however, isn't worried about the makeup of his current roster.

Paige: To John Elway, runners-up don't have super seasons (12/2014): The Duke of Denver hates being a runner-up or an also-ran in anything. He doesn't even want to draw the Community Chest card in Monopoly that proclaims: "You've won second prize in a beauty contest. Collect $10."

John Elway's Son -- Photos of GF's Brutal Injuries ... After Domestic Violence A (10/2014): Jack Elway's ex-girlfriend says she's still traumatized from the violent attack she suffered at the hands of the former college QB ... claiming it was so brutal, she's still in therapy in an effort to move on. As we previously reported, John…

Broncos GM John Elway confident in team's position going into bye week (09/2014): As John Elway sits behind his well-kept desktop, to his right are sliding glass doors to a walk-out balcony that overlooks the Broncos' practice field.

Greeley City Council gives John Elway green light to expand car dealership (08/2014): Denver Broncos Exective Vice President and General Manager John Elway talks to residents at the Greeley City Council meeting on Tuesday. Elway was at Tuesday's meeting to testify on a rezoing project for land he hopes to buy that will allow his auto group to expand their current location.

Emotional John Elway on Pat Bowlen resignation: Broncos "will never be the same" (07/2014): Broncos owner Pat Bowlen, whose teams won more than 300 games and two Super Bowls, is giving up control of the team because of Alzheimer's

John Elway's son pleads not guilty to assaulting woman (06/2014): Jack Elway, the son of Denver Broncos general manager John Elway, has pleaded not guilty to charges that he assaulted his girlfriend and pulled her from a car by her hair.

John Elway: "I hate to hear about" Jim Kelly's cancer (03/2014): John Elway and Jim Kelly were part of the 1983 draft class when five quarterbacks were selected in the first round. Elway, Kelly and Dan Marino wound up in the Pro Football Hall of Fame.

Denver Broncos' John Elway: Von Miller 'has grown up' (02/2014): Von Miller is coming off a season that involved a suspension and a serious knee injury. Denver Broncos exec John Elway says the trying season has led to a newfound maturity for the star linebacker.

John Elway's best moves: Getting Peyton Manning, trading Tim Tebow (01/2014): One of the best plays John Elway ever made for the Denver Broncos came long after he retired.

Kiszla: John Elway is NFL's top executive in 2013 as Broncos boss (12/2013): In 2013, Denver has been the prohibitive favorite to win the AFC from wire to wire. That's a testament to the strength and depth of a roster assembled by John Elway and his front-office staff.

Matt Russell to return from suspension Monday for Broncos, John Elway (09/2013): For the first time in two months, John Elway will be at full staff.The Broncos and the NFL are satisfied Matt Russell has met the requirements set for him following charges of drunken driving

John Elway comments on Broncos' tumultuous offseason at training camp (07/2013): When John Elway accepted Pat Bowlen's offer to head the Broncos' football department 2½½ years ago, there was excitement about hiring a head coach, building a player roster and returning the franchise to its long-lost Super Bowl contention.

Live blog: John Elway, Broncos busy on 2nd day of NFL draft (04/2013): The Broncos entered Friday with the No. 58 pick in the second round and the No. 90 pick in the third round of the NFL draft. What happens from there only John Elway and John Fox may know. Follow all the happenings here live.

John Elway 's Broncos business plan has long-term view on short-term deals (03/2013): With John Elway calling the shots on the football side of the organization, the Broncos have made the decision to limit the risks in free agency, if possible. They don't want dead money on the salary cap.

Plan is to keep Champ Bailey at CB, John Elway says (02/2013): Champ Bailey had a tough game against Torrey Smith in the AFC Divisional Playoffs, but don't expect a change in positions because of it. John Elway said the Denver Broncos have no plans to make a change.

Cook your own John Elway chocolate brownies (01/2013): KUSA - The current issue of People Magazine features an array of Super Bowl recipes including one from chef Tyler Wiard from Elway's Cherry Creek restaurant.

Kiszla: John Elway deserves to be NFL executive of the year (12/2012): NFL records are meant to be broken by John Elway. A quarter century after winning MVP as a quarterback, Elway is slower and grayer.

John Elway Endorses Mitt Romney, Completely Squashes Candidate's Chances in Nort (10/2012): Or maybe even the entire northern half of Ohio, no? The Romney campaign is making a lot of noise lately for boneheaded decisions. For a particular slice of the needed electorate, this is a special kick in the crotch.

John Elway Calls This Week’s Game Against The Raiders ‘Huge’ (09/2012): John Elway knows a thing or two about big games, and this week's contest against the Oakland Raiders looms large for his Denver Broncos.

John Elway, John Fox welcome Broncos greats back into the fold (07/2012): There aren't any official totals, but Broncos training camp is just five days old and there has been a remember-when feel to it all that hasn't always been there in recent years.

Paige: John Elway's final desire is to become an owner (05/2012): They are E-Broncos. John Elway's team ... again and more so. But how long will he stay this time, and will Elway end up as minority, or even majority, owner of the Broncos?

NFL star John Elway signs up to promote Neptune krill oil (03/2012): Elway, who retired in 1999, is currently executive vice president of football operations for the Denver Broncos and part owner of four Elway's Restaurants and automobile dealerships bearing his name.

John Elway says Tim Tebow is Broncos' starter (01/2012): The debate over Tim Tebow's worthiness as an NFL quarterback undeniably will continue in the offseason. What's not in doubt is his status as the Denver Broncos' starter. The team sought to curb the circus that's sure to...

With Tim Tebow the talk of the NFL, John Elway may as well just start Tebowing (11/2011): No one can say with certainty when it happened, but Tim Tebow appears to have taken over our world.

NFL great John Elway back in the game with Denver Broncos (08/2011): John Elway could have spent the rest of his life on the links, basking in the glory of his Hall of Fame career as one of the greatest quarterbacks the NFL has ever known. Popularity and profits, he had them all.

Q&A: Look for John Elway to eventually have at least partial ownership of the Br (07/2011): Since returning to the Broncos as their executive vice president of football operations, John Elway hasn't said that he hopes to become part of the team's ownership.

Sports names, May 31 - John Elway, Hank Aaron (05/2011): John Elway The former Stanford and Denver quarterback might not be as rankled as he was about "The Play," but when a Colorado punk band called itself Elway, he went to his lawyers. Singer Tim Browne didn't sound...

Parker: Former Broncos quarterback John Elway back in car business (04/2011): The legendary John Elway name will once again appear on the side of a metro-area car dealership starting Monday, when the Hall-of-Famer and his business partners take over ownership of Burt Chevrolet, 5200 S. Broadway, Englewood.

Broncos' John Elway intrigued by quarterback class (03/2011): One reason the Broncos continue to look at the next rookie crop of quarterbacks is because John Elway knows quarterbacks.

John Elway recalls his father having high praise for Drew Brees (02/2011): Notes from the NFL combine