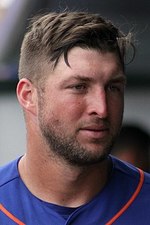 Timothy Richard Tebow (/ˈtiːboʊ/; born August 14, 1987) is an American football player who is a free agent. He previously played three seasons in the National Football League (NFL) as a quarterback for the Denver Broncos and the New York Jets. Tebow played college football at Florida, where he became the first sophomore to win the Heisman Trophy and led his team to two BCS National Championship victories in the 2006 and 2008 seasons. At the conclusion of his collegiate career, he held the Southeastern Conference's records for career passing efficiency and rushing touchdowns. More about Tim Tebow

Current items with a signature of Tim Tebow

These are the most current items with a signature of Tim Tebow that were listed on eBay and on other online stores - click here for more items.

Traded items with a signature of Tim Tebow

If you're interested in Tim Tebow Rookie cards you might want to take a look at our sister site that specializes in Football Rookie Cards only.

The most expensive item with a signature of Tim Tebow (TIM TEBOW ROOKIE CARD 2010 GRADED ROOKIE AUTOGRAPHED CARD BGS 10 PRISTIINE) was sold in December 2011 for $3000.00 while the cheapest item (Tim Tebow autographed Florida Gators Football 07 Heisman COA signed auto) found a new owner for $0.99 in September 2017. The month with the most items sold (542) was December 2009 with an average selling price of $58.55 for an autographed item of Tim Tebow. Sold items reached their highest average selling price in August 2018 with $299.99 and the month that saw the lowest prices with $18.99 was August 2019. In average, an autographed item from Tim Tebow is worth $52.34.

Most recently, these items with a signature of Tim Tebow were sold on eBay - click here for more items.

Tim Tebow among first-timers on College Football HOF ballot (06/06/22): Tim Tebow, who led Florida to two national championships and won the 2007 Heisman Trophy, is among the former players making a first appearance on the College Football Hall of Fame ballot. The National Football Foundation announced on Monday the players and coaches eligible for election into the Ha

Gators legend Tim Tebow speaks positively about coach Billy Napier (02/2022): Tebow thinks Napier is the right man for the job but that there could be some speedbumps along the way.

Don’t let odds fool you, Tim Tebow is not a real candidate for Gators’ coaching (11/2021): Could Tim Tebow really have a shot at Florida's head coaching job? One bookmaker has odds and here they are.

Tim Tebow gets showered with cheers from Jaguars fans during first open training (07/2021): All eyes continue to be glued on the Jacksonville's 33-year-old tight end

Tim Tebow at Jaguars minicamp: First impressions of tight end project as he catc (06/2021): Here's what Pete Prisco took away from Tebow's first day at minicamp

Lawrence: No one will work harder than Tebow (05/2021): Trevor Lawrence is excited to have Tim Tebow as a Jaguars teammate, saying on the AP Pro Football Podcast that "he's just a guy you want to be around" and "no one is going to work harder than him."

Sources: Tebow works out with Jags as tight end (04/2021): Tim Tebow had a workout with the Jaguars as a tight end, sources told ESPN.

Jets' Nick Mangold reveals something Tim Tebow refused to do in huddle, leading (11/2020): Don't try to get Tebow to do this, because he won't

Former quarterback Tim Tebow roasts the Jets during Easter message (04/2020): Tim Tebow is not the first person to roast the team, and he won't be the last

Tim Tebow says he's had conversations with XFL but wants to keep playing basebal (02/2020): The former Heisman winner has passed on the XFL in order to stay with Mets

Tim Tebow gives 'one of the toughest goodbyes' to his pet dog Bronco in heartbre (11/2019): Tebow got the pooch shortly after he was drafted by the Denver Broncos in 2010

Tim Tebow: Georgia football challenged to find motivation for Texas (12/2018): Tim Tebow understands how hard it will be for Georgia to get motivated for Texas after narrowly missing a return trip to the CFB Playoffs, but Kirby Smart explains why he's not worried

Tim Tebow Embarks on National Speaking Tour to Include Fellowship of Christian A (04/2015): Tim Tebow may no longer be impacting people on the football field, but he's keeping busy by taking on public speaking engagements that enable him to connect with his fans.

Tim Tebow calls a touchdown before ball even leaves passer’s hand (12/2014): The Florida legend summons up some of that ol' magic.

Jana Duggar: Is She Dating Tim Tebow? (11/2014): Is Jana Duggar of 19 Kids and Counting dating former NFL player Tim Tebow? Her parents have reportedly been spotted in the company of Tim’s mom, Pam Tebow, recently, adding fuel to the rumor’s flame. Fans of the TLC show …

ESPN ombudsman compares Stephen A. Smith to Tim Tebow (07/2014): Take a look at why Robert Lipsyte compared the suspended host to the ex-Jets quarterback.

People can't stop asking former Jets GM Mike Tannenbaum about Tim Tebow (05/2014): Tannenbaum now works as an agent. He says he hears about trading for Tebow all the time.

Tim Tebow Involved In Self-Reported Ohio State Recruiting Violation (02/2014): Of the 42 recruiting violations Ohio State self-reported to the NCAA in 2013, most are...

Tim Tebow's new Super Bowl commercial is hilarious and spectacular (01/2014): Tim Tebow may not be playing in the Super Bowl, but he'll still make an appearance on your TV this Sunday.

Tim Tebow: Not done with NFL (12/2013): Former quarterback is training five days a week for return to NFL.

Tim Tebow Sign: 'Tebow, Why Not?' Banner Flown Over Jaguars Stadium (09/2013): Tim Tebow may be at his best when his team's keep the ball on the ground but his fans seem to have taken to the air in hopes of finding him a new team. A banner with the message "Tebow, Why Not?" was spotted above EverBank Field in Jacksonville as the Jaguars played the Colts on Sunday.

Tim Tebow cut by New England Patriots (08/2013): Quarterback with more fame than game might have run out of NFL chances. Tim Tebow won a Heisman Trophy, a riveting playoff game and an international following.

How Tim Tebow can save the NE Patriots: Give him No. 81 (06/2013): The New England Patriots need a ray of sunshine, in the wake of Aaron Hernandez being accused of murder. Can Tim Tebow be the one to lift team spirit?

Tim Tebow does not intend to end NFL career (05/2013): Whether or not Tim Tebow's camp believes his NFL run is over, Ian Rapoport reports the quarterback has no plans to walk away from football.

Tim Tebow offered $75-a-game contract with Omaha Beef indoor team (04/2013): By KATE STANTON, UPI.com Tim Tebow has another offer to consider after his release from the New York Jets this week.

Pastor appears to criticize Tim Tebow for 'wimping out' (02/2013): Protests at the state capitol got downright intense Tuesday. Deputies say they found the girl and man in a room at the Wooden Show Motel in ...

Breaking Brad: Tim Tebow open to joining any team except Red Sox (01/2013): According to reports, Tim Tebow wants to go to a team that is less dysfunctional than the Jets. That eliminates pretty much just the Boston Red Sox.

Tim Tebow, Rex Ryan not made available by Jets to speak with media today (12/2012): Ryan to return as Jets coach but Tebow's future with the team unclear

Jets' Tim Tebow 'could be' inactive for Sunday's game (11/2012): Tebow might be active. Or he might not. Or the Jets might activate all three quarterbacks: Mark Sanchez, Tebow and third-stringer Greg McElroy.

NFL Sunday Recap: NY Jets Fans Call for Tim Tebow (09/2012): The good news for NFL fans this week was that that the replacement referees were done. The bad news for NY Jets fans is that the Replacement Jets are just getting started. From The...

Tim Tebow's mother will share life-affirming message at Oklahoma City event (08/2012): Deaconess Pregnancy and Adoption Services in Oklahoma City continues as a faith-based outreach to provide homes for infants and children, as well as compassionate support for women and families. Pam Tebow will speak Sept. 20 at the 2012 Angels of Destiny fundraiser luncheon.

Tim Tebow causes a stir when he runs around shirtless (07/2012): Tim Tebow met with the media on Monday morning to talk about his progress in practice and of course his 'Baywatch Moment' from Saturday afternoon.

Tim Tebow: Watch His Wild Rise From Football Star to Pop Culture Icon (06/2012): Clearly, this New York Jets quarterback isn't the first jock to make the jump from athlete to full-fledged pop icon (hi, Lamar Odom!), but what was it about Tim Tebow that got him to where he...

Tim Tebow Talks To Sold-Out Crowd At CCU (04/2012): NFL quarterback Tim Tebow talked about "faith and football" in front of a packed house at Cincinnati Christian University on Wednesday.

Jets QB Tim Tebow Not Looking To Take Mark Sanchez’s Job (03/2012): New York Jets newly-acquired quarterback Tim Tebow told a radio station Friday that he wasn’t certain if he’d ever start at quarterback for the team, according to ESPNNewYork.com.

Kiszla: Broncos living in past with Tim Tebow (01/2012): If the Broncos want to travel down the road to the Super Bowl, the training wheels need to come off Tim Tebow.

Broncos' Tim Tebow worth big bucks, especially off the field (12/2011): Tim Tebow is money. Perhaps more so off the field than on it. The Tebow effect runs the gamut in terms of the quarterback's financial impact on the National Football League, the Denver Broncos, area businesses and budding entrepreneurs.

The curious case of Tim Tebow (11/2011): Just look at Tim Tebow. He's all wrong for an NFL quarterback. His throwing mechanics are little league. His passes are wild...

Tim Tebow billboard urges Denver Broncos coach to change quarterback (09/2011): The employees at Multiline International Imports have a large digital sign near their business at the intersection of 58th and Logan, just east of I-25 north of downtown Denver, and have decided to use the signage for football purposes.

Broncos' Orton shows he's way ahead of Tim Tebow in QB duel (07/2011): Kyle Orton not only remains the Broncos' starting quarterback, the first training camp workout of the 2011 season today showed that Tim Tebow is a long way from giving the incumbent much competition.

McFarlane Toys set to debut Tim Tebow figure (04/2011): Hoping to gear up for the 2011 college football season, the creators at McFarlane Toys will introduce their third series of College Football SportsPicks figures which feature seven players who became legends at their respective schools.

Tim Tebow's mom to speak at Winter Haven event (03/2011): Winter Haven, Florida - The mother of NFL quarterback Tim Tebow, will speak about her pregnancy with the football superstar at a LifeChoice event in Winter Haven.

Tim Tebow helps homeless man win fantasy league (01/2011): What will be his next miracle? Running off at the typewriter . …