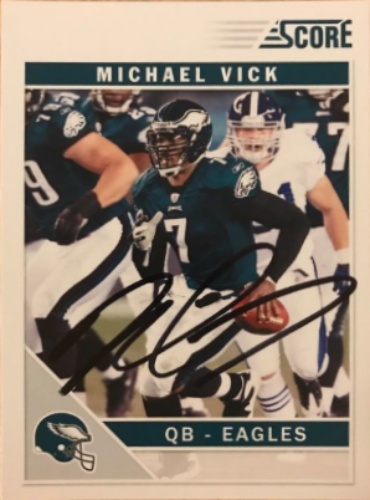 Michael Dwayne Vick (born June 26, 1980) is a former American football quarterback. Regarded as having transformed the quarterback position with his rushing abilities, he is the NFL leader in quarterback rushing yards and was the league's first quarterback to rush for 1,000 yards in a season. Vick played college football at Virginia Tech, where he received first-team All-American honors, and was selected first overall by the Atlanta Falcons in the 2001 NFL Draft. During his six years with the Falcons, he was named to three Pro Bowls while leading the team on two playoff runs, one division title, and an NFC Championship Game appearance. More about Michael Vick

Current items with a signature of Michael Vick

These are the most current items with a signature of Michael Vick that were listed on eBay and on other online stores - click here for more items.

Traded items with a signature of Michael Vick

If you're interested in Michael Vick Rookie cards you might want to take a look at our sister site that specializes in Football Rookie Cards only.

Most recently, these items with a signature of Michael Vick were sold on eBay - click here for more items.

Michael Vick says he won't be unretiring to play in Fan Controlled Football leag (05/22/22): The four-time Pro Bowler tweeted that his cleats are going to 'stay hung up'

Michael Vick coming out of retirement to play football in Fan Controlled League (05/21/22): The four-time NFL Pro Bowl quarterback will make his debut in the upstart league on May 28

On Thanksgiving Day 2012, Washington's RG III 'was on a Michael Vick level' (11/2020): Robert Griffin's career never took off, but he torched Dallas with four TDs as a rookie.

Ranking every No. 1 NFL Draft pick of 21st century: Here's where Eli Manning, Mi (05/2020): Some of these players carved out Hall of Fame-caliber careers, while some turned out to be all-time busts

Where have all the lefty QBs gone? How Tua could start a revival (04/2020): The last southpaw to start an NFL game at quarterback? Michael Vick in 2015. So no matter where he ends up in the NFL draft, Tua Tagovailoa will hold the fate of the left-handed quarterback in his hands.

Michael Vick believes Mike McCarthy may be 'one of the best things' to happen to (01/2020): Michael Vick appears excited about the Prescott-McCarthy pairing

LOOK: Michael Vick gives Lamar Jackson custom 'Madden' cleats that highlight the (11/2019): From one record-breaking mobile quarterback to another

Lamar Jackson compared to Michael Vick by Seahawks, here's how he stacks up stat (10/2019): Jackson is having an historical season, one that rivals the great seasons by Randall Cunningham and Michael Vick

Oddsmakers list Colin Kaepernick as favorite among ex-NFL QBs to sign with XFL (03/2017): You can also place bets on whether big names like Brett Favre and Michael Vick will make comebacks

Is Michael Vick finished? These 6 teams could have interest post-draft (04/2015): There are three criteria that make sense for teams in need of a veteran backup QB.

Why Michael Vick is wrong for Rams (03/2015): One of the big questions that will hang over the St. Louis Rams as the offseason begins is what will the Rams do about their quarterback situation?

Jets to let Michael Vick test free agency, per report (02/2015): The team will not be offering him a contract before free agency begins, according to Metro New York's Kristian Dyer.

Michael Vick: Thousands call for NFL star to be BANNED from UK over cruel dogfig (01/2015): An NFL star who ran a brutal dogfighting ring that saw animals hung and drowned is facing calls for him to be BANNED from playing in the UK. Thousands of people have signed a petition calling on David Cameron to block disgraced quarterback Michael Vick from entering the UK for a match in October.

Michael Vick wants another chance as a starting QB next season (12/2014): The 34-year-old New York Jets backup quarterback feels he can still play for at least another two years

Michael Vick returns to the field (11/2014): Congratulations! Your weather is set to . You can change the location at any time. Don't have an account?

The Jets whose fantasy values climb with Michael Vick at QB (10/2014): There are fantasy wastelands every season — teams that provide little or no useful options for your squad. The competition this season for most barren wasteland is stiff. The Buccaneers...

Kevin Gilbride: Michael Vick should replace Geno Smith as Jets QB, 'Give your te (09/2014): Congratulations! Your weather is set to . You can change the location at any time. Don't have an account?

Jets QB Michael Vick Makes Quick Cameo In Philly Vs. Eagles (08/2014): Vick's first game back in the city he called home for five seasons was reduced to nothing more than a one-play cameo, something more suitable for an Instagram video rather than the highlight reels he filled with the Eagles.

Michael Vick vs. Geno Smith: Day 8 breakdown; Vick with no first-team snaps for (07/2014): Smith gets all the work with the first team Thursday.

Michael Vick pranked by radio show, asked about poodle-fighting ring (06/2014): Quarterback thought he was calling into a sports-talk radio show.

A Jets fullback says 'yes, sir' to Michael Vick in huddle (05/2014): Jets coach Rex Ryan says he hadn't heard something like that 'in a long time.'

Keidel: The Jets Would Be Wise To Bring In Michael Vick (02/2014): Vick can hurl a ball across area codes, while we're still not sold on Smith's arm. Vick may not run a 4.2 40-yard dash anymore, but he probably runs a robust 4.4. Smith often runs like he's wearing snowshoes.

Michael Vick avoids backup talk: 'I want to start' in 2014 (01/2014): Vick's time in Philly is now over â he hit free agency at season's end â but he says he's not ready to take on a limited role elsewhere.

Michael Vick handles demotion with class (11/2013): Every weekday from now until Christmas, WZZM's Derek Francis will be featuring ... Food, family and football have been Thanksgiving Day traditions for ...

Michael Vick has decent fantasy day despite blowout loss (09/2013): Loading... Philadelphia Eagles quarterback Michael Vick did what he could, completing 14 of 24 passes for 248 yards, no touchdowns and no interceptions against the Denver Broncos . He had eight rushes for 41 yards.

Michael Vick set to end bankruptcy, paying back $20M (08/2013): Michael Vick has accomplished much since his release from prison four years ago.

Michael Vick: Eagles have forgiven Riley Cooper (07/2013): “He apologized for what he did, and as a team we understood,” Vick said. “We all make mistakes in life and we all do and say things that maybe we do mean or we don’t mean. But as a teammate, I forgave him.”

Michael Vick: Chip Kelly has grabbed team's attention (06/2013): Loading... "Hopefully, Chip makes a decision before training camp and we won't have to answer that question, so we can go out there as quarterbacks and just focus on this season and not answer questions about competition every day," Vick said.

Michael Vick believes he is faster than RGIII, Colin Kaepernick (05/2013): Loading... Go ahead and skip to about the eight-minute mark of the video to listen to Vick, if you're so inclined. Unfortuantely for Vick, the men who chase him on Sundays have proven to be fast enough to tackle him and subsequently force fumbles.

Michael Vick's Brother Tweets Anti-Gay Slander Towards Arizona Cardinals [PHOTOS (04/2013): The last thing the Michael Vick needs in his life is another controversy. The Philadelphia Eagles quarterback's younger brother, Marcus , took to Twitter and hurled an anti-gay insult towards the Arizona Cardinals.

LeSean McCoy: "I think Michael Vick is the starting quarterback" (02/2013): McCoy, who worked out with Vick recently, says the veteran quarterback is as determined as ever to win the starting job over Nick Foles.

Michael Vick's base salary second highest among QB's if Eagles keep him for 2013 (01/2013): The Eagles are at least exploring the possibility of keeping Michael Vick. If they do, it will likely be at a reduced price considering Vick is set to be the NFL's second-highest paid QB with a $15.5 million base salary.

Eagles say health is only factor keeping Michael Vick off field (11/2012): Conflicting reports swirl around Michael Vick regarding his recovery from a concussion, but the Eagles say the quarterback has plateaued on the fourth phase of his five-step recovery.

Eagles' Andy Reid reiterates that Michael Vick is his quarterback (09/2012): Plus, other notes from around the NFC East

Inside Tidewater's Take: 'I guarantee Michael Vick will not get hurt' (08/2012): Michael Vick, the scrambling quarterback (read: moving target) from Newport News, has been fitted with a flak jacket made of lightweight Kevlar. The manufacturer of the flak jacket guaranetees it will keep him healthy. He used that word: guarantee.

Chasing History -- Michael Vick (07/2012): Throughout training camp, we'll look at different Eagles who could make history during the 2012 season. First up, Michael Vick.

RGIII says he looked up to Michael Vick growing up (06/2012): The rookie symposium is designed to help the newest members of the NFL transition into professional football. Perhaps La’Roi Glover, director of player engagement for the St. Louis Rams, summed it up best: Read full article >>

Dealership learns that Michael Vick, in town for youth event, remains a lightnin (05/2012): An act of goodwill has enraged Findlay Toyota’s Facebook audience to a point where the car dealership’s marketing department shut down its promotional page. The target of the backlash is Philadelphia Eagle Michael Vick, who met with fans Friday night at the Henderson dealership.

We Want Michael Vick Type Justice for Trayvon! (04/2012): In 2007 it was discovered that Michael Vick, an African American football player in the NFL, was participating in organized dog fighting. As a result, people from all over the nation were in an uproar.

Michael Vick Has Released Two Heartfelt PSAs Asking People To Stand Up Against D (03/2012): Michael Vick vowed to dramatically change his lifestyle after being released from prison for dog fighting in 2009.

Michael Vick ruled out, Pete Carroll to get another look at Vince Young (11/2011): The Eagles have already released their final injury report, and the most noteworthy thing on it is that quarterback Michael Vick has been ruled out with a rib injury. Also out is receiver Jeremy Maclin.

Michael Vick comeback pays off handsomely (08/2011): Michael Vick was in prison on a dogfighting conviction three years ago. Now, the Philadelphia Eagles have reportedly reached agreement on a contract that will pay Michael Vick $100 million over the next six years.

Promoter sues Michael Vick over Gulfstream party no-show (03/2011): From the bottles of Hennessy and Grey Goose, to the velvet rope detail, to a snack-stocked limo, all the trappings of a VIP party were present. Except the VIP himself.

Michael Vick's Dogs: Pit Bulls Make Slow And Painful Recovery (01/2011): KANAB, Utah (AP) — At the Pro Bowl this weekend in Hawaii, Michael Vick will start at quarterback – an unmistakable benchmark for what has been a rapid, successful and, in some circles, surprising comeback.