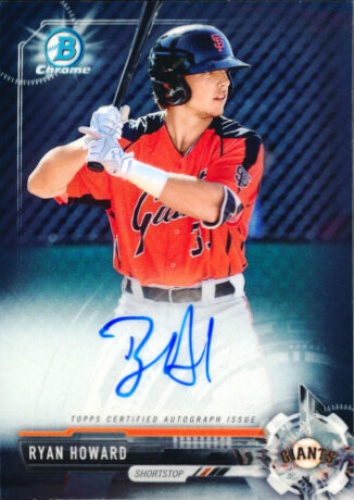 Current items with a signature of Ryan Howard

These are the most current items with a signature of Ryan Howard that were listed on eBay and on other online stores - click here for more items.

Traded items with a signature of Ryan Howard

If you're interested in Ryan Howard Rookie cards you might want to take a look at our sister site that specializes in Baseball Rookie Cards only.

The most expensive item with a signature of Ryan Howard (2008 W.C. Phillies Team Signed Autographed Baseball JSA Ryan Howard Chase Utley) was sold in May 2022 for $2999.00 while the cheapest item (Ryan Howard certified autograph 2007 Topps # 75 baseball card) found a new owner for $0.01 in February 2022. The month with the most items sold (88) was October 2008 with an average selling price of $50.50 for an autographed item of Ryan Howard. Sold items reached their highest average selling price in December 2016 with $214.99 and the month that saw the lowest prices with $1.99 was September 2017. In average, an autographed item from Ryan Howard is worth $41.00.

Most recently, these items with a signature of Ryan Howard were sold on eBay - click here for more items.

What's it like to be on a hot stove 'mystery team'? Ryan Howard recalls Phillies (12/12/19): Nine years ago, the Phillies came out of nowhere to land the former Cy Young winner

Ryan Howard trade rumors: 9 AL teams which could strike a deal with Phillies (03/2015): Yankees among the American League teams that Ryan Howard would not block a move to.

In which someone describes A-Rod, B.J. Upton and Ryan Howard as potential offens (12/2014): This needs to happen, people.

A 28-year-old Ryan Howard got an "allowance" from parents (11/2014): On Wednesday, the sad details of the lawsuits lobbied back and forth between Ryan Howard and his family became public. In retrospect, a 2007 HBO Real Sports' profile piece on Howard, and the influence of his family, is more than a little interesting.

Caption Contest winners: Ryan Howard's contract (10/2014): On Monday, I asked for your best caption suggestions for my new Ryan Howard Phillies cartoon. Congrats to puckinweb, who came up with the winning caption, posted above.

Phillies Notes: Was this Ryan Howard's last game with Phillies? (09/2014): If this was the end for Ryan Howard in a Phillies uniform, let it be known he departed Citizens Bank Park to cheers. Howard blooped a single to center in the ninth inning of Sunday's 2-1 loss to Atlanta. Tony Gwynn Jr. pinch-ran for him.

Sale pending on Ryan Howard's Bluebell home (07/2014): The Phillies’ slugger’s is selling his six bedroom, 7-bath house and moving to a beachfront mansion in Florida.

Ryan Howard's back-to-back errors doom Philadelphia Phillies in first game of do (06/2014): The fourth-inning errors allowed the Braves to tie the game at 2. They will play again at 7:15 tonight.

Ryan Howard becomes the fastest to 1,000 career RBI (05/2014): It may be 2014, but Ryan Howard was able to reach another offensive milestone on Saturday against the Mets.

Robbed? Questionable Call Costs Ryan Howard the Cycle (04/2014): Phillies first baseman Ryan Howard was a double short of the cycle when he stepped to the plate against the Rockies in the seventh inning on Sunday.

Man robbed of electronics, signed Ryan Howard jersey (03/2014): Police are looking for the man who stole another man's bag while he sat on a bench along the James F. Hall Trail earlier this week.

Phillies' Ryan Howard quietly in the swing early (02/2014): Ryan Howard does not want to discuss his health this spring. Judging by his play Tuesday, the Phillies can be cautiously optimistic.

Ruben Amaro: ‘Ryan Howard Is 100 Percent Healthy’ (01/2014): Just like the lead up to the 2013 Phillies season, the 2014 version has a lot of "ifs" that have to come true for the Phillies to compete. Not the least of which is "if" Ryan Howard can be healthy, and have a return to the form that made him one of the premier sluggers in baseball.

Photos: Ryan Howard's mansion rises from the beach (11/2013): Baseball star Ryan Howard's 34,000-square-foot beachfront mansion is coming together in Belleair Shore. Though the property itself is fenced off, much of the under-construction home is visible from the beach, drawing a steady crowd of onlookers.

Ruben Amaro Talks About Potentially Platooning Ryan Howard (10/2013): Ryan Howard will make $25 million to play for the Phillies next season. The idea of a part-time player making that much money is a difficult one to swallow, especially if you're the person who decided to pay that player $25 million.

Ryan Howard joins Phillies in Atlanta for season's end (09/2013): ATLANTA - Ryan Howard tugged on his gray T-shirt. He sat in one corner of the visitors' clubhouse at Turner Field, and his left knee was exposed as he wore red Phillies shorts. A bag of his bats - for use only in batting practice - were shipped overnight and propped against his locker.

Ryan Howard's struggles continue in Phillies' 6-1 loss to Dodgers (06/2013): The three-time All-Star was 0-for-4 with three Ks Sunday and is hitless in 20 consecutive ABs with 11 strikeouts - WATCH HIGHLIGHTS

Hurting Ryan Howard, team taking things one day at a time for Phillies(With Vide (05/2013): BOSTON — Ryan Howard played in pain Monday night, and that is how things need to be for the time being.

Ryan Howard's hot bat keeps Phillies in the conversation (04/2013): With dreary clouds blanketing the sky in Cleveland, the Phillies had a day off on what might be the brightest point of the season thus far.

Charlie Manuel visits Roy Halladay, Ryan Howard and scouts Chase Utley, too (01/2013): In three weeks and two days, Charlie Manuel will stroll along the diamonds at the Carpenter Complex as pitchers and catchers take part in their first workouts of the spring.

Phillies hoping Jim Thome can fill in at first with Ryan Howard out (01/2012): Jim Thome was asked a question Friday that he knows he cannot truly answer until March and April.

Phillies' Ryan Howard gives $1.2M to local schools (12/2011): Philadelphia Phillies baseball player Ryan Howard clowns for the cameras after announcing a donation from the Ryan Howard Family Foundation to the School District of Philadelphia during a news conference at City Hall, Thursday, Dec. 1, 2011 in Philadelphia.

Ryan Howard Needs 5-6 Months To Recover From Surgery (10/2011): Ryan Howard could miss the start of next season after the Phillies' slugger had surgery Wednesday to repair his torn Achilles' tendon.

Ryan Howard to get cortisone shot for aching foot (09/2011): PHILADELPHIA – For the first time since Aug. 6, Charlie Manuel wrote a lineup that featured his eight regulars Saturday night. The result was an NL East-clinching win.

Ryan Howard is carrying the Phillies offense like no batter in the majors (05/2011): Howard had driven in a fifth of the team's runs through Saturday.

Can Ryan Howard carry the Phillies in 2011? (03/2011): CLEARWATER, Fla. - The man who Ryan Howard put out of a job in Philadelphia six years ago can relate to the pressure of being a team's power hitter.

The Big Piece Puzzle: Which Ryan Howard is most valuable to Phillies? (01/2011): THIRTY-FIVE years ago, the closest thing to advanced mathematical analysis in baseball was Orioles manager Earl Weaver's stack of 3-by-5 cards that recorded how his hitters had fared against various pitchers and vice-versa.