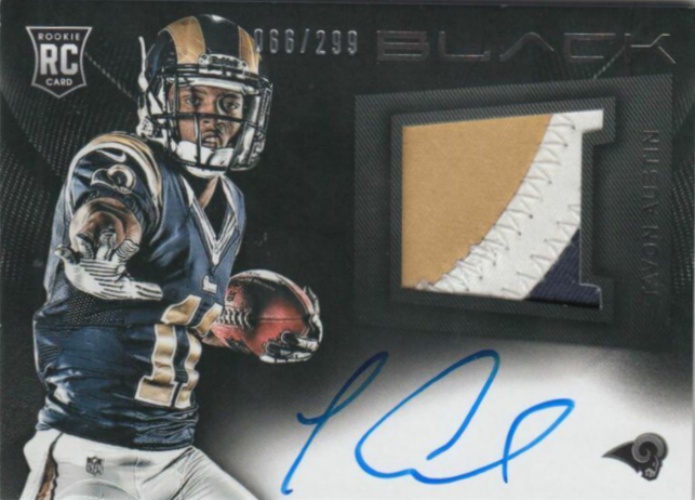 Tavon Wesley Austin (born March 15, 1990) is an American football wide receiver who is a free agent. He played college football at West Virginia where he received All-American honors twice. He was drafted by the St. Louis Rams in the first round of the 2013 NFL Draft. More about Tavon Austin

Current items with a signature of Tavon Austin

These are the most current items with a signature of Tavon Austin that were listed on eBay and on other online stores - click here for more items.

Traded items with a signature of Tavon Austin

The most expensive item with a signature of Tavon Austin (2016 Nike NFL Game Used Worn Jersey Los Angeles LA Rams Tavon Austin Autograph) was sold in July 2022 for $1999.95 while the cheapest item (Tavon Austin 2013 Panini Rookies and Stars Jersey Autograph 181/299 RC) found a new owner for $0.99 in August 2022. The month with the most items sold (42) was December 2013 with an average selling price of $47.00 for an autographed item of Tavon Austin. Sold items reached their highest average selling price in April 2017 with $224.99 and the month that saw the lowest prices with $0.99 was January 2018. In average, an autographed item from Tavon Austin is worth $31.00.

Most recently, these items with a signature of Tavon Austin were sold on eBay - click here for more items.

Josh Allen: It’s awesome to have a guy like Tavon Austin (06/23/22): The Bills signed Tavon Austin earlier this month, adding a veteran receiver with significant experience. It didn’t take Austin long to garner the respect of his teammates in the locker room, according to quarterback Josh Allen. “When you have some of these young guys in here, they know Tavon Austin

Former Cowboys receiver Tavon Austin to reportedly work out for 49ers, who hope (08/2020): The veteran wideout might be returning to the NFC West

With 16.8 yards of separation, Cowboys' Tavon Austin scores 59-yard TD (12/2019): With the most separation on a receiving touchdown this season, the former Rams receiver scores against his former team.

Rams will likely need to trade up to get Tavon Austin (03/2015): It appears that the St. Louis Rams will need to take a proactive approach if the team plans to land Tavon Austin in the NFL Draft.

NFC special teams player of the week returns to Tavon Austin’s clutches (12/2014): Tavon Austin hasn’t made much of a splash as a wide receiver for the Rams this season, but he’s found other ways to remind the team of the big play ability that made him a first-round pick in 2013. Austin has averaged over six yards a carry while scoring two touchdowns and he added a…

Tavon Austin: Playbook looked like Spanish as rookie (07/2014): St. Louis Rams wide receiver Tavon Austin told reporters on Wednesday that he didn't really know what he was doing during his rookie season. That's no longer the case for the speedy playmaker.

Schottenheimer: Tavon Austin playing faster for Rams (06/2014): Brian Schottenheimer plans to move Tavon Austin around the offense because the explosive receiver is "playing so much faster" this season. What else did we learn from the Rams' offseason?

Jeff Fisher expecting big things from Tavon Austin (03/2014): Tavon Austin struggled in 2013, but the Rams' Jeff Fisher believes the speedy wide receiver will show big improvements this season. The St. Louis offense might be counting on it.

49ers notes: Rams’ Tavon Austin gives 49ers something to think about (11/2013): Speedy rookie has given St. Louis a big boost in recent weeks.

Tavon Austin's flop draws laughter but no laundry (10/2013): Tavon Austin has had a disappointingly quiet start to his rookie season with the St. Louis Rams, but he caught the attention of viewers Monday night thanks to a comical flop on special teams.

Analyzing Tavon Austin's early-season struggles (09/2013): Tavon Austin was due to be part of the new "Greatest Show on Turf," so why hasn't he been producing?

Tavon Austin glad to be one of Bradford's 'new toys' (07/2013): Tavon Austin is expected to contend for the Offensive Rookie of the Year award. One thing that might help: his already good on-field relationship with St. Louis Rams QB Sam Bradford.