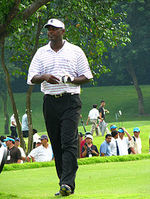 Vijay Singh CF (Fiji Hindi: विजय सिंह pronounced ; born 22 February 1963), nicknamed "The Big Fijian", is a Fijian professional golfer. He has won 34 events on the PGA Tour, including three major championships: one Masters title (2000) and two PGA Championships (1998, 2004). He was elected to the World Golf Hall of Fame in 2006. More about Vijay Singh

Current items with a signature of Vijay Singh

These are the most current items with a signature of Vijay Singh that were listed on eBay and on other online stores - click here for more items.

Traded items with a signature of Vijay Singh

The most expensive item with a signature of Vijay Singh (Vijay Singh Masters Champ PGA Golf Signed Golf Ball GAI) was sold in December 2013 for $499.99 while the cheapest item (Autographed Vijay Singh August 2008 Golf World) found a new owner for $0.01 in December 2008. The month with the most items sold (21) was February 2008 with an average selling price of $10.50 for an autographed item of Vijay Singh. Sold items reached their highest average selling price in October 2014 with $229.99 and the month that saw the lowest prices with $0.99 was February 2020. In average, an autographed item from Vijay Singh is worth $15.50.

Most recently, these items with a signature of Vijay Singh were sold on eBay - click here for more items.

Phil Mickelson supports Vijay Singh's decision to play in Korn Ferry Tour event (05/08/20): The event will take place on the same week as a PGA Tour event Singh did not qualify for

Retief Goosen, Vijay Singh among leaders at Riviera (02/20/15): Retief Goosen of South Africa smiles after making a birdie on the 10th hole as the clubhouse is seen behind him during the first round of the Northern Trust Open golf tournament at Riviera Country Club in the Pacific Palisades area of Los Angeles. Goosen is part of a five-way tie for the lead.

PGA Tour Seeks IMG Documents About Vijay Singh's Endorsements (11/2014): In the latest move in its ongoing legal battle with Vijay Singh, attorneys for the PGA Tour are seeking documents from IMG, one of golf's largest talent management firms.

PGA Tour Confidential: Hall of Fame holdup, Snedeker's PED-policing strategy and (10/2013): Fred Couples is in but the Golf Hall of Fame is changing its rules. Our debate on the new Hall.

Vijay Singh shoots 66 to move into second in his Champions Tour debut (09/2013): Vijay Singh had six birdies in his bogey-free second round at the Pacific Links Hawaii Championship.

PGA Tour seeks dismissal of Vijay Singh’s deer antler spray lawsuit (06/2013): Despite the tour’s eventual exoneration of Singh, the three-time major winner contended, in his lawsuit, that the punishment resulted in his being “humiliated, ashamed, ridiculed, scorned and emotionally distraught.”

Veer Vijay Singh's perfect party (05/2013): A string of presentations and mesmerising lore from Sri Lanka fascinated the guests at this do

With decision on Vijay Singh looming, PGA Tour needs to make its drug-testing pr (02/2013): Now is the time for Tim Finchem to make his PED testing program public.

Vijay Singh's spray disaster smacks of such stupidity that the golfer should sta (01/2013): Heard the one about the golfer from Fiji who used deer-antler spray and is now facing a ban from the sport?

Vijay Singh among early leaders at Bethpage (08/2012): FARMINGDALE, N.Y. - Vijay Singh feels he is playing as well as he ever has. Now if he can just get a win to prove...

Vijay Singh is early leader among finishers at AT&T National (06/2012): Midway through the first day of the AT&T National at Congressional Country Club, things are heating up. The early leader among those already finished is Vijay Singh, who posted a 3-under-par score of 68 during Thursday's round. "It's good for me [shooting a 68]," said Singh. "Any time I shoot ...

Silent Vijay Singh within 3 shots of Masters lead (04/2012): After chipping in for eagle and shooting 72 in the second round of the Masters Tournament on Friday, Vijay Singh celebrated the prospect of his first weekend at Augusta National in three years by doing what he does best besides playing world-class golf: stay silent.

Vijay Singh is pain-free and playing well in Gator Bowl Pro-Am (02/2012): Vijay Singh doesn't see his 49th birthday in less than two months as one step closer to the Champions Tour. Instead, it's one more number to beat - just like par on a golf course.

Vijay Singh: On Eastern Philosophy (11/2011): Shotvision: J.B. Holmes A second part in our series with J.B. Holmes on ... October 31, 2011 Faldo Tips: The Release Sometimes different golf instructors use different terms for the same ...

Vijay Singh Sets Sight on Malaysia Win (10/2011): Fijian star Vijay Singh will renew his golf fling with Malaysia at the CIMB Asia Pacific Classic with every intention of ending his season on a winning note.

Sanctuary's manager Vijay Singh steps down (09/2011): The top manager of one of the most luxurious hotels on the South Carolina coast is stepping down.

This week on Tour: Treatments spark Vijay Singh (08/2011): Three weeks ago, Vijay Singh was coming off a summer in which he either missed the cut or withdrew from four of seven events and had sunk to 42nd on the FedEx Cup points list and 16th on the International Presidents Cup points list.

Sergio Garcia ekes way into US Open; Vijay Singh takes pass (06/2011): COLUMBUS, Ohio - Sergio Garcia changed his mind about U.S. Open qualifying and it paid off Monday when he earned...