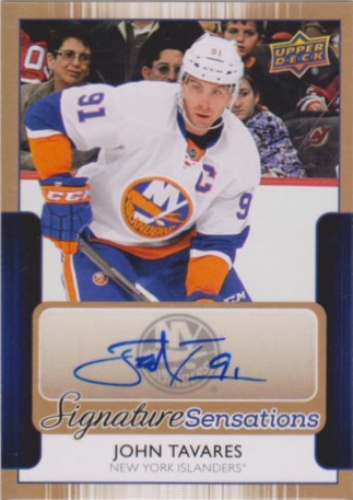 John Tavares (born September 20, 1990) is a Canadian professional ice hockey centre and captain of the Toronto Maple Leafs of the National Hockey League (NHL). He was selected first overall by the New York Islanders in the 2009 NHL Entry Draft, where he spent nine seasons and served as captain for five seasons. More about John Tavares

Current items with a signature of John Tavares

These are the most current items with a signature of John Tavares that were listed on eBay and on other online stores - click here for more items.

Traded items with a signature of John Tavares

If you're interested in John Tavares Rookie cards you might want to take a look at our sister site that specializes in Hockey Rookie Cards only.

The most expensive item with a signature of John Tavares (SC Bern Signed John Tavares Jersey (1 of 50 made) ) was sold in March 2019 for $650.00 while the cheapest item (JOHN TAVARES SIGNED ORIGINAL MAGAZINE 14 x 12 NEW YORK ISLANDERS CANADA JUNIOR) found a new owner for $0.77 in March 2018. The month with the most items sold (21) was January 2011 with an average selling price of $22.50 for an autographed item of John Tavares. Sold items reached their highest average selling price in November 2012 with $349.99 and the month that saw the lowest prices with $3.25 was May 2008. In average, an autographed item from John Tavares is worth $30.77.

Most recently, these items with a signature of John Tavares were sold on eBay - click here for more items.

Maple Leafs captain John Tavares out three weeks with oblique strain (09/27/22): John Tavares will miss the start of the 2022-23 season

Leafs' Tavares gets back on ice after scary injury (05/27/21): Maple Leafs captain John Tavares, who suffered a concussion and a knee injury in Game 1 vs. Montreal, was back on the ice for a skate Thursday.

Maple Leafs' Tavares to miss at least two weeks (05/22/21): Toronto Maple Leafs star John Tavares will be sidelined a minimum of two weeks due to a knee injury in addition to a concussion sustained during a horrific collision in Game 1 of their series against Montreal.

Maple Leafs' John Tavares ruled out indefinitely after taking knee to the head (05/2021): Tavares was discharged from the hospital on Friday

Marchand scored twice in 3rd, Bruins beat Maple Leafs 4-2 (11/2019): Toronto captain John Tavares smashed his stick against the post late in another loss in which a decent effort was undone by preventable errors. Brad Marchand scored twice in the third period and the Boston Bruins defeated Toronto 4-2 Friday, handing their Atlantic Division rivals a fourth consecuti

Rielly's 2nd goal lifts Maple Leafs past Bruins 4-3 in OT (10/2019): Mitch Marner and Auston Matthews have played sparingly together at even strength early in their careers. With injured Toronto captain John Tavares sitting out, the two connected to give the Maple Leafs a big win. Marner's hard shot after taking a pass from Matthews glanced in off teammate Morgan

Tavares, Matthews, Gauthier score three quick goals as Leafs down Sabres 5-3 (02/2019): TORONTO — Auston Matthews set a franchise record for the 102-year-old Maple Leafs on Monday night but his eyes are on the rest of Toronto's season.Matthews scored in a four-goal second period as . . .

The trophy Islanders’ John Tavares lost on last day of season (04/2015): Just in case the Islanders’ disheartening 5-4 shootout loss to the Blue Jackets in the final regular-season game at the Coliseum on Saturday night wasn’t tough enough for them to...

John Tavares scores four goals to lead his team in NHL All-Star Game (01/2015): COLUMBUS, Ohio — It was enough to give a goalie nightmares: A record 29 goals, 25 players with at least two points and eight with at least four. In addition to the high-profile superstars who didn't make it to Ohio's capital city for the NHL All-Star Game, defense also took ...

John Tavares’ OT goal propels surging Islanders past Capitals (11/2014): John Tavares was reaching up to the bridge of his nose, to where there was a small cut. It was put there hours earlier from a hand of Capitals star...

Banner night for ex-Generals star John Tavares (09/2014): Perhaps the most impressive aspect of watching the banner honouring John Tavares being hoisted to the rafters of the GM Centre on Sunday night relates to the company it now keeps.

Islanders John Tavares has green light for full activity after knee injury (05/2014): After his season was cut short by a torn MCL and meniscus, John Tavares told WGR 550 in Buffalo on Thursday that he 'was cleared last week to resume full activity.'

Olympic injured John Tavares has no regrets (02/2014): The Islanders’ best player hobbled into Nassau Coliseum on Tuesday morning, with one crutch under his left armpit _ he lost the other crutch in Sochi _ and one gold medal in his pocket.

John Tavares bringing family to Sochi, despite terror fears (01/2014): Political and social unrest in Russia is not going to stop John Tavares from fully embracing his first Olympic experience. Starting on Feb. 9, the NHL will shut down for...

ADDING MULTIMEDIA Hockey star John Tavares teams up with Gillette to help Canada (11/2013): Gillette Canada announced today that it is joining forces with Team Canada Olympic hopeful John Tavares to help Canadians get their ‘game face’ on in support of our hockey stars as

Serby’s Q&A with John Tavares (10/2013): Islanders star John Tavares took a shot at some Q&A with Post columnist Steve Serby. Q: Tell me about your Stanley Cup dream. A: It’s changed quite a bit. When...

Gulitti: Islanders' John Tavares deserves Hart Trophy (04/2013): The play of Islanders center John Tavares has made him one of the NHL's most valuable plsayers.

Islanders' John Tavares now dominant but he wants more (02/2013): Interesting how it works with budding superstars.

New York Islanders' John Tavares among NHL elite (01/2013): Tavares enters a game against the Penguins at 7:38 p.m. today at Consol Energy Center as New York's leader in points (7) and assists (6)

BOSTON -- John Tavares tipped in Matt Moulson 's shot for the late tiebreaking g (03/2012): stopped 32 shots, and the New York Islanders snapped a five-game, road-losing streak with a 3-2 victory over the Boston Bruins on Saturday.

Matt Moulson, John Tavares combine for 5 points, Islanders beat Oilers (12/2011): UNIONDALE, N.Y. - Matt Moulson had a goal and two assists, and John Tavares and P.A. Parenteau both added one of...

UNIONDALE, N.Y. -- If John Tavares scores four points a night, it won't matter m (10/2011): For the second straight game -- after being pointless for two games -- Tavares broke out with four points. This time he did it with his third NHL hat trick, including the winning goal and an empty-netter in the Islanders' 4-2 victory over the New York Rangers on Saturday night.

After two seasons, is John Tavares still a No. 1 overall pick? With one year und (06/2011): With the first round of the 2011 National Hockey League Entry Draft ready to go on Friday, former NHL general manager and current TSN analyst Craig Button looked back at the first round of the 2009 and 2010 Drafts - compiling 'Re-Drafts' from the last two years.